Athletes to watch outside of football and men’s basketball 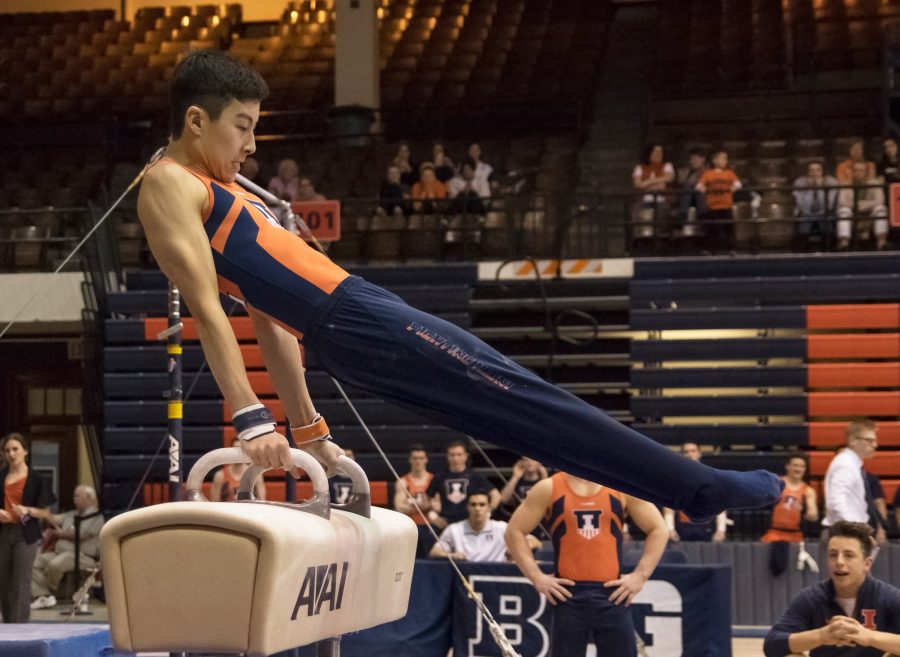 Illinois’ Brandon Ngai performs his routine on the pommel horse at the meet against Michigan on March 12, 2016.

There is a lot of hype this year for both football and men’s basketball. Football has former Bears coach Lovie Smith at the helm, and basketball has forward Malcolm Hill,who is shaping up to be one of the better seniors in the Big Ten. Here are some superstar athletes that you may not know of when coming to campus.

If Martinez completes the three-peat at 157 pounds, he will become the first wrestler in Illinois history to win three titles. If he can win a title all four years, he will be only the fifth person in history to do so. His name will be with the greats like Cael Sanderson and Kyle Dake.

Make sure to watch for Martinez’s matchups against Penn State’s Jason Nolf. The only time Nolf and Martinez have lost in their career is to each other. This is shaping up to be one of the best rivalries that college wrestling has to offer.

The Big Ten is the strongest wrestling conference in the country, so most of the opponents Illinois will face are going to feature the best wrestlers in the country on either side.

Wrestling may not be your cup of tea, but watching one of the great ones is sure to make you a fan.

With this team, it was hard to narrow it down to just one athlete because this team is so good year in, year out.

If you were to rank the greatness of an Illinois squad based on wins or postseason finishes, men’s golf would come out on top.

Illinois has been a powerhouse in golf, a rarity in the midwest. They have been able to compete with the Big 12 and PAC 12 when it comes to postseason play.

Last year the team almost made it to the final round of match play but fell short against Oregon, who were playing in their home state.

Every year this team has dominated the Big Ten with seven conference titles in the last eight years.

Catching the team is hard. The closest they played to Champaign last season was at Olympia Fields on the south end of Cook County. If you do get the chance to watch this team in action, you will know why they were named the best team at Illinois and why their head coach Mike Small was named coach of the year.

Some freshman come into school having just turned 18 and are ready to start the new chapter in their lives. Brandon Ngai just turned 18 but is about to be a junior and a defending NCAA champion.

Ngai won the pommel horse title last season for the Men’s Gymnastics team. At 17, he was the youngest NCAA champion.

Ngai could return to the top spot on the podum again this year.  Illinois always manages to get someone bringing home an individual championships.

Illinois is one of the few schools in the country that is lucky enough to feature a men’s gymnastics program with only 16 around the country.

Gymnastics may be a sport that is not everyone’s go-to for an event, but if you want to witness a team that is consistently among the top in the country, go see Illinois. They are second in the team titles with ten.

Masaki is a senior in Media.