What to expect from Illinois athletics this year 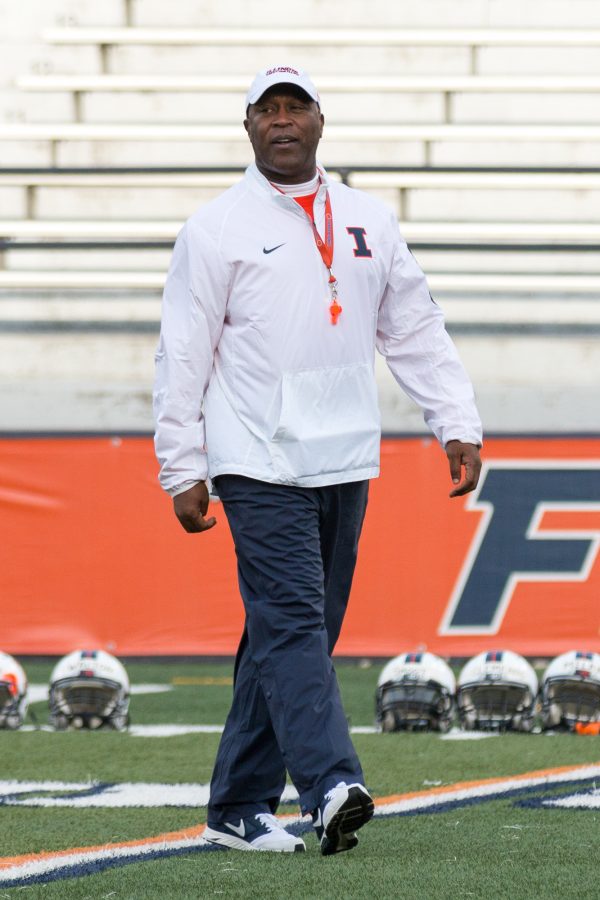 Love Smith supervises the first spring practice of the season on April 1st, 2016.

The University of Illinois athletic department suffered arguably one of its worst years in its history.

And that wasn’t all.

But after the figurative hurricane passed through the athletic department, new athletic director Josh Whitman seems to have provided the calm the department so desperately needed. He pulled the shocker of all shockers when he signed Lovie Smith to be the new football coach. He provided Illini fans a new motto that’s taken off better than “Our state. Our team” ever could’ve hoped: “We Will Win.”

Although the former Illinois tight end has rejuvenated Illini nation, fans need to be reasonable with their expectations in the upcoming year, especially when it comes to the school’s revenue sports.

Yes, Lovie filled the Illini Union Café when he met with students, but that doesn’t mean this year’s team will automatically challenge Ohio State, Michigan State and Michigan for a Big Ten title.

Fans need to remember that this year’s team has only Beckman and Cubit recruits. Lovie has made a strong start in recruiting the Class of 2017, especially within the state, but there are plenty of holes in the current roster.

The defense lost a lot of playmakers and coaches will be forced to rely on players who haven’t started before. Yes, the defensive line will be the anchor, but the linebackers might be cause for concern.

The offense returns senior quarterback Wes Lunt, who will learn a new offensive system after the departure of both Bill and Ryan Cubit. Lunt lost his lead running back Josh Ferguson to the NFL, but sophomore Ke’Shawn Vaughn provided highlight reels that might remind fans of former great Illini running backs.

Injuries continue to be a problem for the team. Both wide receiver Mike Dudek and running back Dre Brown suffered ACL tears for a second-straight offseason, meaning other players will need to step up.

Fans shouldn’t plan on a 2-10 season like the one the team suffered during Beckman’s first year, but getting to a bowl game with a 6-6 record despite a difficult schedule would be considered a victory for Lovie.

The upcoming year is a make-or-break season for men’s basketball head coach John Groce. Many called for Groce’s head after his team failed to qualify for the NCAA tournament for a third straight year as four players were arrested with two of which being dismissed from the program. After all the arrests, Whitman decided to stick by Groce. The head coach will have to prove his worth to the program, especially in his upcoming recruiting class.

With the dismissal of Kendrick Nunn, senior Malcolm Hill remains the face of the program. Both Tracy Abrams and Mike Thorne Jr. were given a sixth year of eligibility and should provide veteran leadership, but it will be up to Hill and company to survive in close games that they’ve lost in the past — a healthy season would also be a nice bonus for Groce.

The rest of the programs will continue to do the same as last season. Volleyball coach Kevin Hambly and his team will try to get out of their Sweet Sixteen bubble while Janet Rayfield and the soccer team try to return the NCAA tournament. The men’s golf team will attempt to finally capture a national championship while the softball will try to build upon last year’s success.

And who knows what surprises and fun journeys other teams will take fans on this year?

So while the new faces in the athletic department are exciting and fans have a right to think it’s heading in the right direction under the leadership of Whitman, remember, be cautiously optimistic.

Michal is a senior in Media.
[email protected]
@mdwojak94