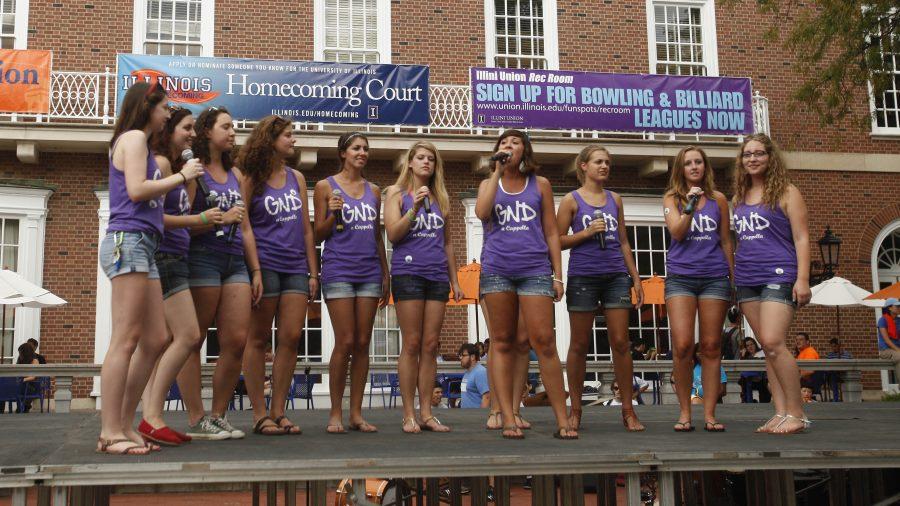 The prospect of Quad Day is a little intimidating at first. The number of organizations that line the sidewalks of the Main Quad make stopping at every booth difficult, if not impossible.

Luckily, Quad Day is organized in such a way that people can efficiently walk around the Quad while still managing to see everything in a reasonable amount of time.

Quad Day is compartmentalized into various areas based on the RSO focus or type. The different groups have something for everyone, from social fraternities to politics and religion.

Beginning at the entrance in the by the English Building, one can find clubs regarding University departments and academic services. Tables give information about services provided by University faculty and staff.

Some of the groups in this section include the Illinois Leadership Center, the Krannert Art Museum and the Study Abroad office. Similar to all of the other booths on the Quad, these departments will tell the students what they are and what they can offer students, but are not trying to attract new members in the way that social fraternities or campus clubs are.

Just north of the entrance to Foellinger, lies one of the larger groups classified as Athletic and Recreation clubs. This section includes all of the club sports and recreational activities. Among these clubs are The Chief’s Airsoft Platoon, the Illinois Sailing club and of course, the school’s very own Quidditch Team.

Many times these groups will be in their uniforms, so students may spot Quidditch players in jerseys or water polo players in Speedos. At certain points during the day, these teams may scrimmage and show off their athletic skills.

In the Creative, Media and Performing Arts section, which straddles the walkway just south of the northernmost patch of grass, students will find multiple avenues with which to express their theatrical, film, musical and artistic interests. This section boasts a cappella groups, a guitar club, multiple unique dance groups and even a Chinese Independent Film Society.

The many different cultures and ethnicities of the student body comprise one of the University’s many positive aspects, and the campus’s RSOs are representative of that diversity.

One section in the middle of the Quad is reserved for cultural and ethnic groups. Students have the opportunity to learn more about different cultures or bond with students from similar backgrounds to their own.

Last spring there were 9,636 international students enrolled at the University, according to the International Student and Scholar Services. Similar to the cultural and ethnic groups, there is a smaller section of international organizations focused on nationalities coming together.

There is also a demonstration area on the lawn where select groups showcase what their clubs are about. Some groups cannot effectively show students what they do with only a standalone booth.

For example, the Fencing Illini will be “en garde” in their special fencing gear and the iRobotics group should be presenting their robots.

The Non-Profit and Community organizations in the northwest corner are more of a resource for students rather than actual student organizations. The local YMCA, the Peace Corps and some of the local churches are represented among other community groups outreaching to University of Illinois students.

Students can find philanthropic groups based on their individual interests. Some groups will serve local charities while others will make an impact across the country and overseas.

The west section of the Quad is delegated to the group known as “other social,” which has some especially unique social focuses. For example, there is a Tea Company, a Girl Talk Club and an October Lovers Club.

Just north of them, there are several politically focused student organizations that can help students find others with similar mindsets or can help them understand the political process more clearly. If students are not interested in the Illinois Student Senate or the College Democrats, then at least they can register to vote with the Illini Voter Coalition.

What would college be without its Pre-professional and Academic clubs? Most of us, after all, are trying to figure what we want to do and these clubs can definitely give students the opportunity to network and explore their academic interests even more. This is probably the largest of the groups, located on the far east side of the Quad, so whatever one may be interested in, there is a pretty good chance there is a club for that.

The religious groups in the southwest corner of the Quad provide a great social foundation, bringing people of the same faith, or sometimes of different faiths, together.

The Rights and Freedom Issues groups in the northwest corner of the map are set up mainly to promote their ideals and beliefs. The ROTC has its own section consisting of a few groups advertising their programs. The Service and Volunteer groups represent numerous different charities and programs ranging from the Illini Fighting Alzheimer’s group to the Students for Environmental Concerns. Participating in these kinds of organizations can be very fulfilling.

Lastly, there is a area allocated to Greek Life. This is a great chance to get to meet with as many of the organizations as possible while they are all in the same place.

Regardless of what new students did in high school or what they think their main interests are, Quad Day is an excellent opportunity to find and explore some new interests. So keep an open mind, talk to all the friendly people at the booths – that’s what they’re there for – and have fun.

Brooks is a sophomore in Business.
[email protected]