Changes on campus from Dad’s time to now 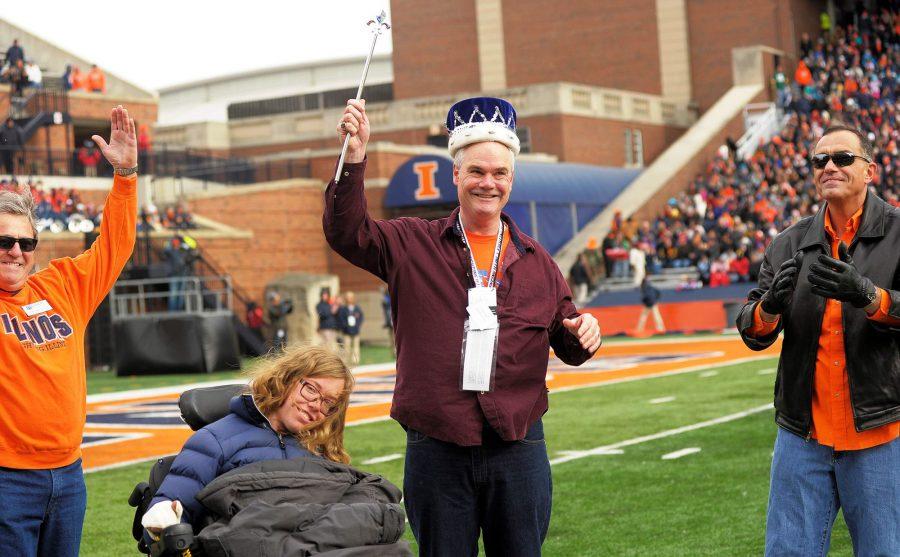 The majority of alumni dads coming to campus for Dad’s Weekend attended the University in the late 1970s and 1980s. Although some campus staples, like Alma Mater and KAMs, were around then, now there are many differences in academics, athletics and student life.

The ‘70s and ‘80s were a different time for Illini Athletics. Currently, they are nothing to rave about; the basketball and football teams have struggled in recent seasons, and student attendance at games is down.

Many of the dads returning to campus this weekend will likely remember the Illini’s glory days. In 1975, Lou Henson became coach of the men’s basketball team. During his 21 years as coach, the Illini had 423 victories with a .654 winning percentage.

Bill Muckian, a Business alumnus from the class of 1981, said that basketball at that time was very popular and the program was gaining success every year.

“The fans loved Lou with his Lou-doo — think of a slightly less boisterous Trump comb-over — and his bright orange blazers,” Muckian said. “In January ‘79 we beat Michigan State, who had Magic Johnson and went on to win the NCAA title later that year.”

Assembly Hall, now called the State Farm Center, sold out for almost every Illini basketball game. Then, students actually went to the Illini Football games and tailgated too — something students now are starting to see more of since the recent opening of Grange Grove.

“Tailgating was popular then, and fraternity and sorority house blocks would pre-game together and go-to game and sit together. Today I understand that happens at a bar and then nobody goes to the game … that’s a shame,” Muckian said.

He expressed nostalgia for Illinois football, the Alma Mater song at halftime and when athletics had the theme “The ‘80s Belong to the Illini.”

Mike White became football coach in 1980. He brought in new talent and led the Illini to the  Rose Bowl in 1984. Although they lost to UCLA 45-9, students rallied around football and supported it significantly more than they do now.

Campus housing is one of the most notable differences in campus life. Muckian remembered somewhat of a housing crisis on campus in the early 1980s.

“You had to live in a dorm or frat or sorority your freshman and sophomore years back then. So the dorms were crowded,” he said. “Many double rooms were converted to triples and many dorm lounges were used as quads.”

Students then were required to live in University housing for two years. This changed in 1983 when Board of Trustees said that students only had to live in certified housing for 30 semester hours.

Now, instead of a housing shortage, campus offers a variety of options, including the high-rise apartment buildings that have drastically changed the Champaign skyline since the 1980s.

Additionally, Beckwith Residential Support Services (originally called Beckwith Living Center) opened in 1981 under the Disability Resources and Educational Services for students with severe physical disabilities. This residence hall has helped the University become one of the best schools for physically disabled students in the country. Now, Beckwith is located on the first floor of Nugent Hall, which was built in 2010.

Apart from housing, many changes happened on campus. In 1986 the Main Quad experienced big, physical changes, including the installation of a telecommunication line and an underground irrigation system. This forced the Quad to essentially shut down, creating what the Illio called “The Year Without a Quad.”

In the ‘70s and ‘80s fraternities and Sororities were still a huge part of campus. Muckian was a part of the fraternity Phi Kappa Tau.

“Greek life, like today, was an integral part of campus life in the late ‘70s … possibly more so than today … This environment fostered some great rivalries in frat sports, particularly football and basketball,” he said.

Although some houses have come and gone from the University, Greek life still remains a huge aspect of campus with 97 total fraternities and sororities. Back then, according to Muckian, KAM’s was still the go-to bar for Greeks, a trend that continues today.

Some other popular bars included Thunderbird’s, Round Robin, Bonis, House of Chin and Mabel’s — all of which have closed or changed into other campus bars.

The drinking and “going out” culture has always been a huge part of Illinois. For students in college before 1980, the drinking age for beer and wine was 19.

“Unofficial” did not exist until 1996, but campus still had its fair share of crazy weekends. One such event was “Hash Wednesday,” which started in 1977 and supported marijuana law reform. By the ‘80s, it became too much and police eventually intervened.

Illinois still has some of the same traditional weekend celebrations as it did back in the day.

“SIU was more renowned for a nutty Halloween weekend at that time, but U of I had to be a close second. Streets were closed off and it was generally a festive event,” Muckian said. “Certainly Dad’s Day and Mom’s Weekend foster treasured memories for me.”

Students at bars in the ‘70s and ‘80s were likely listening to Blondie, Queen and Michael Jackson, which are a bit different than Drake and Flume that play now.

Soap operas were popular television, very different from the Netflix and other streaming services students now have to keep up with their favorite television shows.

The ‘70s and ‘80s might seem like the time of hippies and revolution, but there is a similar amount of activism happening on campus today. African-American students were gaining rights day-by-day at Illinois in the ‘70s and ‘80s. The Black Alumni Association, still around today, formed in 1980.

In 1985, there were many protests surrounding Apartheid, and students put pressure on the University to cut investments with South African companies. Similarities have been drawn from campus then to the modern-day coal divestment protests.

Muckian said that during his time at Illinois from 1977 to 1981, the Chief was highly popular. Students began protesting Chief Illiniwek in 1989.

Then and now, students are involved in current events and gather with like-minded individuals to support causes they care about.

Kelsie is a senior in LAS