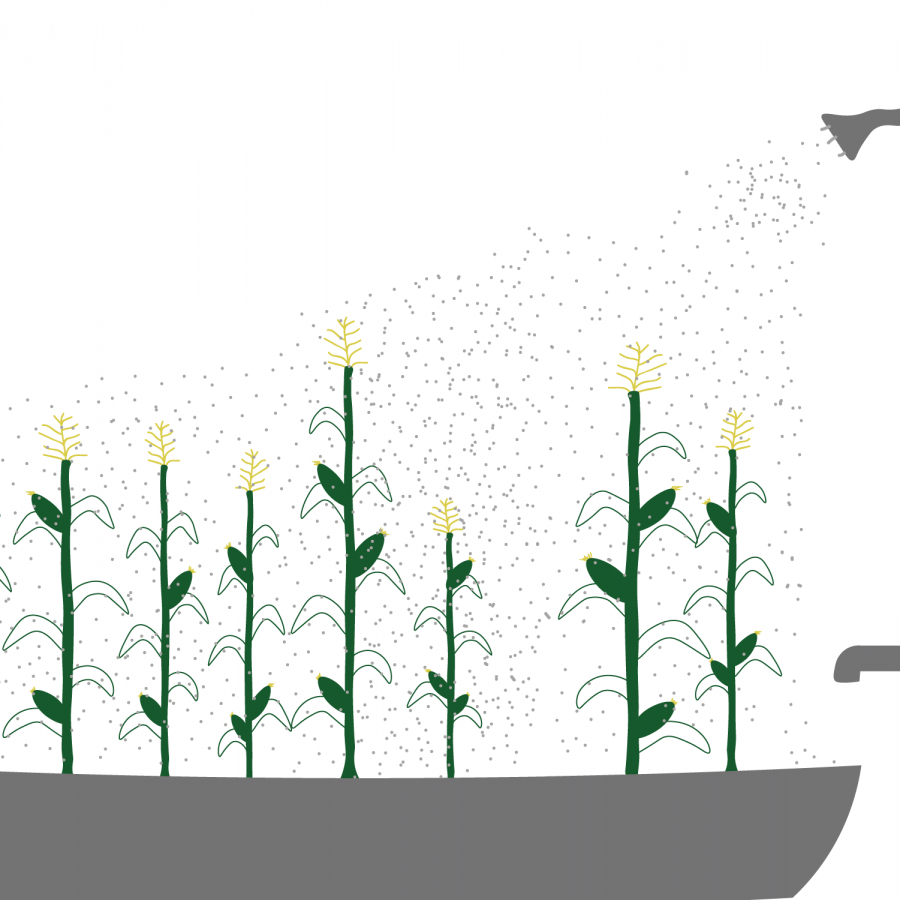 Water and food are two necessities that human life is directly dependent on. Humans can survive roughly five days without food and only three days without water. As essential as they are, a striking number of people struggle to access both of these resources on a daily basis, especially in developing nations.

To make matters worse, this number is growing, and according to a recently published paper on food security in “Science,” this number is going to continue to grow for at least another 40 years.

The paper explains that to tackle this problem, society needs to look for solutions that are sustainable as well as economically and environmentally reasonable.

John Trimmer, graduate student in Engineering, saw this issue play out first-hand during his time in the Peace Corps in Uganda. Trimmer’s experience there motivated him. Upon starting his graduate studies at the University, he joined Dr. Jeremy Guest’s lab.

Guest is an assistant professor in the civil and environmental Engineering at the University. According to the department’s official website, Guest’s research “focuses on the development of technologies for sustainable water and sanitation, with a focus on resource recovery from bodily excreta in technologically advanced and developing communities.”

The Guest lab’s primary focus is on developing sustainable infrastructure for countries that are in dire need of improvement. In this work, they integrate a variety of fields, such as biofuels, urban water systems and even agricultural systems.

This collaboration led Guest and Trimmer to publish a paper on wastewater being used for agricultural purposes. In August it landed a spot in “Nature Sustainability.” The paper promotes potential solutions to the problems addressed previously in the “Science” article: growing more food to feed an expanding population in a way that is environmentally and economically friendly.

The publication discusses and analyzes how human wastewater is useful for agricultural purposes. Both the water and nutrients, such as nitrogen and potassium, can be reused for crop fertilizer production.

“We apply nutrients to crops in a field, and usually those nutrients come from fertilizers we make commercially,” Trimmer said. “Right now, it’s a one-way flow of nutrients, from our food, to us and then to our wastewater. Our line of thinking was, ‘can we make this process more circular and more sustainable?’”

To answer this question, Guest and Trimmer began investigating how realistic it would be to transport wastewater between treatment facilities and agricultural establishments.

They examined nutrient travel distances in 56 cities around the world. These distances would be indicators of how far nutrients would need to travel from facilities to get to where they would be useful, and of how much energy the whole process would require.

“Usually where a treatment plant is depends on the topography of the surrounding area,” Trimmer said.

Guest and Trimmer used a variety of online databases to gather information about the locations of various treatment facilities relative to large urban areas, as well as the most agriculturally prominent areas of all the countries where the 56 cities were located.

“I was surprised that there was a very wide range of data, from distances in the single digits all the way to hundreds of kilometers,” Trimmer said.

Researchers looked further at how crop alternatives, still fitting to the food culture of each city, could impact the efficiency of a nutrient recycling system. Some of the more nutrient-rich crop alternatives they examined had the potential to reduce the nutrient travel distances by a significant amount, which could make the whole system more promising as an alternative to man-made fertilizers.

“We looked (at) what crops would be optimal for making the nutrient travel distances as short as possible, which are often the crops that need the most nutrients,” Trimmer said.

Guest and Trimmer took it a step further and analyzed how realistic this system would be economically for those same cities. Different wastewater treatment options and nutrient travel distances would impact how much energy and cost would be associated with this type of system in a variety of countries, and for some, this option is more viable than for others.

“The most appropriate strategies for resource recovery — and whether recovery should be pursued at all — will depend on the circumstances in a given location. It’ll depend on the stakeholders, nutrient markets, the characteristics of the existing treatment infrastructure, availability of local agriculture or fertilizer distribution strategies, among other considerations,” Guest said.

Guest and Trimmer discovered that in countries where large, densely populated urban areas were closer to high-production agricultural regions, nutrient travel distances tended to be shorter, making the concept more affordable and sustainable. In more spread out countries, however, such as the U.S., a system such as this would be less beneficial to agriculture.

“We focused on applying nutrients to agriculture, but you could apply them to other things as well, such as forests. This might be more efficient for urban areas farther from agriculture, such as Boston,” Trimmer said.

The research doesn’t stop after this project for the field of sustainable engineering. In fact, Trimmer noted that the entire field is just starting to gain some serious momentum.

“There has been a lot of research on this subject over the last few years, and I think more and more people are interested in transforming the idea of wastewater into something useful,” Trimmer said.

Going forward, Guest’s lab is going to continue to refine this potential system for nutrient-based recycling.

“Now, we’re working on more contextual issues, like how different forms of recovered nutrients impact the plants and soil in that area,” Trimmer said.

This includes finding specific ways nutrients should be extracted from wastewater so that they’re most useful to plants, and finding the ecological impact this type of reintroduction of nutrients would have on ecosystems surrounding agricultural areas.

The work is far from over, but there is a bright future ahead of it, with the possibility to help feed our ever-growing population by enhancing agricultural production.

“We will continue building on this work to identify technologies and locations where the greatest benefits could be observed, and engaging with all relevant stakeholders to develop strategies to work toward closing nutrient loops between people and our food supplies,” Guest said.