Be kind on Quad Day 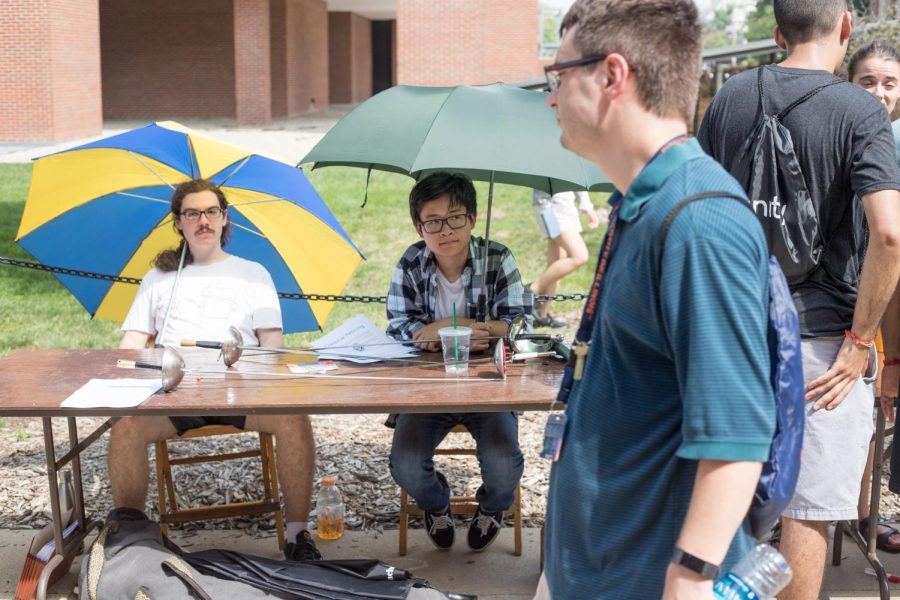 Representatives of the Classical Fencing Registered Student Organization sit at their booths as people walk by exploring the Quad during Quad Day Aug. 26. Keep in mind the people working on Quad Day are people, too.

Quad Day is an exciting day for freshmen. It’s often the first day on your own on campus — the potential in the air is visceral. It feels like the whole world is at your fingertips, from animal-lover clubs to political orgs to cultural houses.

For upperclassmen, though, Quad Day is hard to deal with. Everyone is hot and sticky and crabby, and the lack of shade on the Main Quad suddenly becomes really noticeable. One day, you too, young freshman, may find yourself standing next to a hot plastic table on steaming concrete in the middle of a swarm of sweaty twenty-somethings while shamelessly hawking your chosen club. Since we all wind up there at some point, make an effort to be courteous while browsing the lines of booths. Here are a few key pointers for how to survive Quad Day while being conscientious with the people you talk to.

A walk through the Quad on August 25th is going to mean sensory overload: there will be lots of people talking and yelling, music playing, food being sold, and posters (oh, so many posterboards) standing on the folding tables that line the lawn. It will get overwhelming. You will get tired. But don’t let the exhaustion get to you: remember that the guy pleading for you to check out his heavily stickered posterboard has been standing in the heat all day. Or that the lady with the clipboard asking for signatures believes in her cause so much that she’d be willing to brave the cynical, pimply masses of freshmen on campus to find supporters. Look each of these people in the eye and give them a polite “No, thank you.” It might seem like a small symbol, but it means a lot to be acknowledged like that. Who knows: you might even bump into something surprising that you wouldn’t have otherwise sought out!

The unsubscribe button exists for a reason.

If you just spent three minutes being talked at by a very excited member of some club, at least do them the courtesy of signing up for their email list. Even if it’s not totally your cup of tea, whoever just pitched their organization to you has spent hours prepping for Quad Day just to meet people like you. You don’t have to join an organization you don’t like, but put your name down on their list to thank them for talking to you. You may wind up actually liking what the organization does — but even if you don’t, it’s just the considerate thing to do to show that you appreciate their time.

A simple “thanks, but no thanks” is not too much to ask.

You will go through dozens of clubs that you have absolutely no interest in. You may even be stopped by people representing organizations that you wouldn’t have thought of joining in a million years. Instead of ignoring them or wordlessly walking away, do those people the simple courtesy of acknowledging them and saying “no, thank you,” before you move to the next booth. Remember, they’re people too!