Celebrate your father; he won’t be around forever 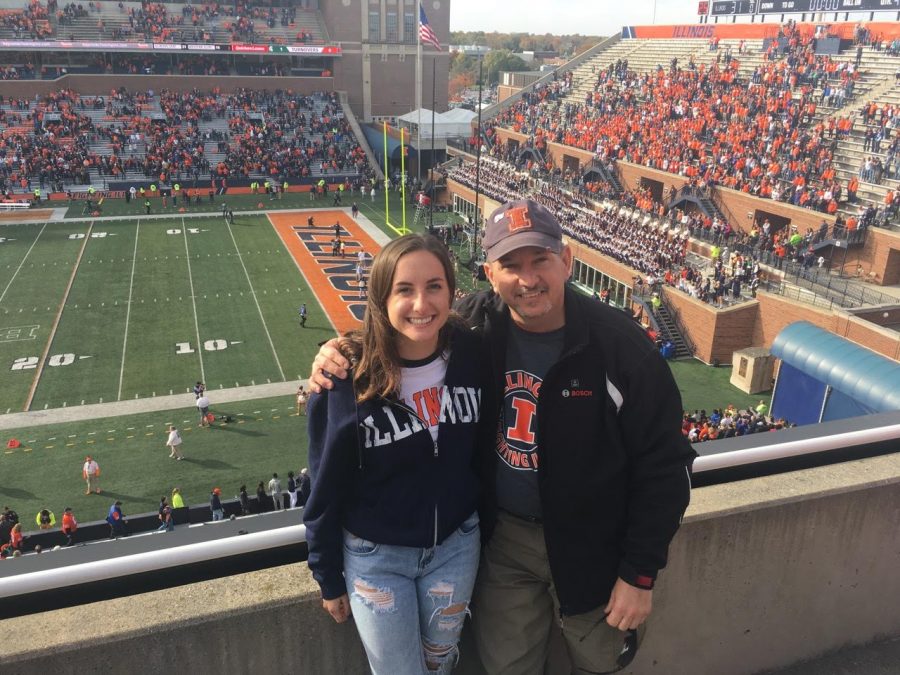 Molly Zupan and her father celebrate Dads Weekend 2016 by watching the football game. Molly's father made a quick enough recovery to visit her during this important weekend.

We all have fears. Some of those fears are irrational or unrealistic, while others are inevitable and maybe even reccurring. Last summer, I was afraid of spiders and the dark. A few months later, my biggest fears changed dramatically. I became afraid of losing a loved one.

My family was volunteering at a fundraising event in support of local unions, which my dad helped organize. As a proud advocate for unions, my dad put an excessive amount of effort into this fundraiser and brought on too big of a workload.

Within an hour of the festival’s kickoff, my dad collapsed. His best friend witnessed the initial fall, and my mom and sister saw the rest. He laid on the ground, purple and still. My sister and mom were frozen at his side. I was on my way home from school while this all happened.

A security guard, who was not originally scheduled to work, ran to my dad and began CPR. If not for his efforts, he never would have even made it to the hospital.

Luckily, the hospital had the necessary equipment, technology and skill to help. My dad was put under a recently-developed technique known as induced hypothermia, which cools the body to sustain and slow down bodily processes.

If the hospital’s personnel were not trained in this procedure, my dad would have died.

Doctors stressed that a person who goes over five minutes without a heartbeat, blood flow or oxygen is in serious danger of permanent brain damage. Among those who survive, about one in 10 will have severe brain damage. If that isn’t scary enough, only 12 percent of those who suffer an out-of-hospital cardiac arrest live.

For nearly two weeks, his future was uncertain. He was unresponsive and couldn’t breathe independently. Our days were spent huddled together in a hospital room, with blotchy, red faces and sad, tired eyes.

Saying that we were scared is an understatement. For days, we did not see my dad’s smile or hear his voice. The doctors told us that, if he survived, he’d have major brain damage. Those words brought an unreal amount of pain to my mom, sister and I.

Roughly a week passed before something incredible happened. I was holding his hand, when I said, “Dad, if you can hear me, please squeeze my hand,” and he did. At that moment, I knew my dad was going to push through.

About a week later, my dad woke up. A breathing tube was removed from his throat and nurses calmed him. When I walked into the room and saw his eyes open and arms moving, I nearly dropped to the floor. I felt a powerful rush of revival.

The first thing my dad said to us was, “I’m sorry.” He was crying, struggling to speak and apologizing repeatedly. It blew my mind that he was apologizing for suffering. He felt worse for us than he did for himself.

I’ve always known how genuine, humble and caring my dad is, but, at this moment, I somehow knew it better than before.

Since last September, my family has changed. We have grown closer in a way that I cannot describe. During the time that my dad’s life was at risk, my family and I were at an all-time low. We were miserable, beyond worried and so terrified. But we were so strong.

My dad’s current well-being is a result of some sort of miracle. He is pretty close to the same person he was before. The brain damage didn’t stand a chance.

When I look back, I feel so sad. I am still haunted by the sound of the loud beeping machines that surrounded my dad’s hospital bed, and by the expression on my mom’s face when a doctor said, “brain damage.”

My dad cares about my family more than anything. He continuously puts us before himself. He is always honest, patient and willing to provide a helping hand or word. He loves my sister and me unconditionally. He tells stories that make us laugh and cry, and gently pushes us to work hard and be kind while supporting us along the way.

Without my dad, I would be someone else. My family would be lost,  and my mom would be without her other half.

I am so grateful.

Celebrate this Dads Weekend. I definitely will.

Molly is a sophomore in FAA.