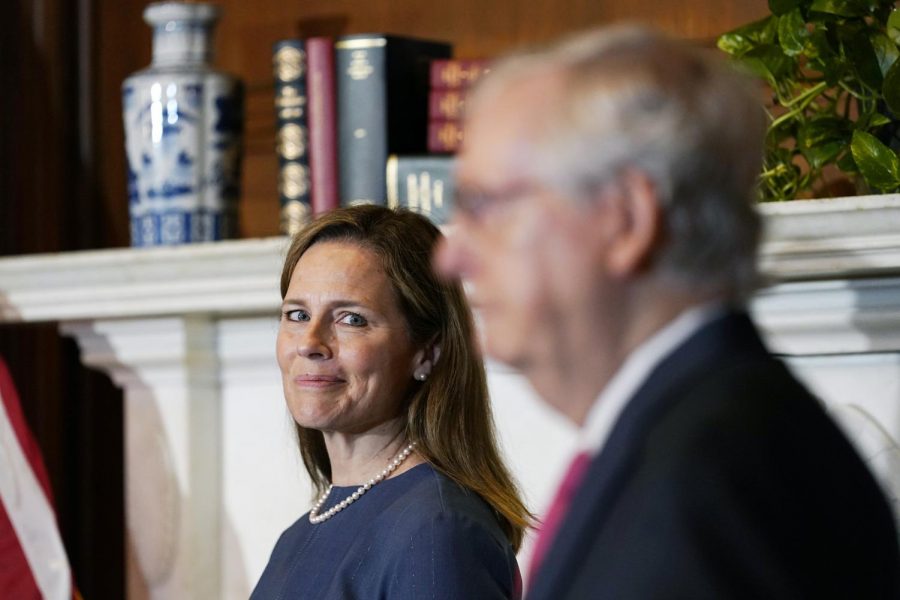 Seventh U.S. Circuit Court Judge Amy Coney Barrett, meets with Senate Majority Leader Mitch McConnell as she begins a series of meetings to prepare for her confirmation hearing on Sept. 29.

Editor’s Note: This story was written before Amy Coney Barrett was confirmed by the Senate on Monday.

On Sept. 18, President Donald Trump released a statement on the impact of late Supreme Court Justice, Ruth Bader Ginsburg. It states, “Today, our Nation mourns the loss of a titan of the law.”

Now, Supreme Court Justice nominee Amy Coney Barrett is in a position of influence on the current election year.

In the history of the United States, a Supreme Court vacancy has occurred 14 times during the year of an election. In the last 100 years, there are three Supreme Court justices that have been confirmed during these monumental years. These include Benjamin Cardozo in 1932, Frank Murphy in 1940 and Anthony M. Kennedy in 1988. As the 2020 election occurs in less than two weeks, there is opposition from both political parties on the best way to handle this matter. On one side of the spectrum, Speaker of the House Nancy Pelosi shared her feelings of distraught toward the current nominee. She stated, “Every vote to confirm this nominee is a vote to dismantle health care. The American people will hold every Senator responsible for their vote at the ballot box.”

However, Majority Leader Mitch McConnell released his thoughts on the integrity of the current system. He stated, “This confirmation process falls squarely within history and precedent. Neither falsehoods nor strong feelings change the facts.”

In recent years, President Barack Obama underwent a similar situation before the presidential election of 2016. Following the death of Antonin Scalia, Obama nominated Merrick Garland to fill the vacant position. In contrast to the current situation, the Democratic party was not in control of the Senate. This resulted in no action taken toward Garland’s nomination.

Barrett’s circumstances are different. As the Republican Party controls the Senate and is represented in the White House, the attention is also drawn to how this event could affect the election. With the current “4-4 court,” as Senator Ted Cruz described the court’s leniency, there are many differing opinions on the addition of Trump’s nominee. Barrett’s nomination has brought into the spotlight many pressing issues American citizens and politicians have concerns about. As tensions rise and political parties work toward opposing goals, all current news, including Barrett’s nomination, may influence Election Day outcomes.

Haley is a sophomore in ACES.