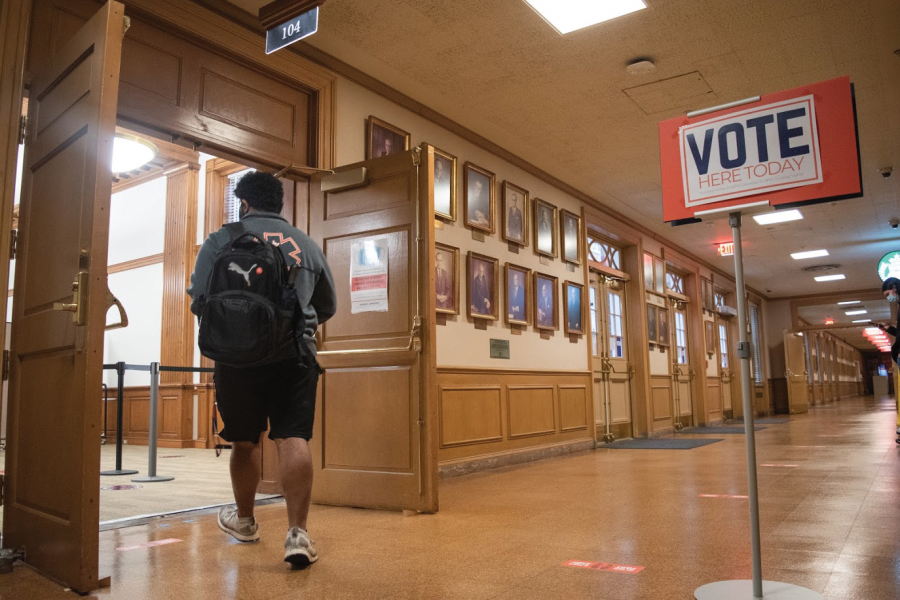 A student enters an early voting site in the Illini Union on Friday afternoon. Americans between the ages of 23 and 38 are now the most represented generation in the United States.

One of life’s many double-edged swords is the fact that we are all entitled to our own opinion. Everyone having their own unique perspective can be a beautiful thing, as it allows us to learn the things that our own life experience hasn’t taught us. Aristotle once said “It is the mark of an educated mind to be able to entertain a thought without accepting it.”

Unfortunately during election season, there are some topics that people find impossible to accept and entertain. Through growing up in the social media era, I quickly realized that other people were not given this same advice growing up. Whenever I witness people arguing their political opinions on Twitter (to obviously no persuasive avail) I wonder where all these strong, differing opinions come from. If you are like Marvin Gaye and I, and you are wondering, “What’s going on?” — I provide you a theory of how this election and public opinion may have gotten so divided.

According to a source from Pew Research Center, those aged 23-38 have officially passed up baby boomers to become the most represented generation in the United States. Not only are millennials the new majority age group in the United States, but another study from Pew Research also found that millennials are mostly liberal leaning/democratic. This stark contrast of the new generation in town compared with older generations can tell us a lot about why we are so conflicted during this election, as some of the most pressing platforms of each political spectrum expose a massive age gap amongst our population. Pew Research Center studies have shown that there is a massive distinction between how the younger and older generation feel about many of this election’s following topics.

The majority of millennials and Generation X’s believe in government assistance for the needy, even if it means going into debt. Meanwhile, the majority of boomers and silent generation (those aged 74-91) do not agree with such government programs. This ideological gap possibly has links with another gap that exists between boomers and millennials: the wealth gap. Federal Reserve data shows that boomers own 57% of the nation’s wealth while Generation X owns 16%, and millennials just 3%. This wealth gap goes to show why boomers, who are more estranged to financial troubles than the younger generations, may have less sympathy for those in economic need.

From the same source, these trends can be seen in other progressive fronts, with 79% of millennials believing that immigrants strengthen our country rather than burden it. On the other hand, only 56% of boomers (and 47% of silents) feel the same. These statistics perhaps convey why Trump and Republicans place such an emphasis on their stout immigration policies, as it is likely because their old generation base generally thinks less favorably of immigrants.

The current unrest in this country is palpable. Since the tragic deaths of innocent minorities, such as the killing of George Floyd and Breonna Taylor at the hands of the police, protests have flooded towns in every part of America. On one side of the issue, there are people seeking justice and reform so this type of tragedy can never happen again. On the other side, people see the resultant rioting as a bigger issue than the catalyst of the unrest itself, and that preservation of “law and order” must be prioritized.

According to another source from Pew Research, a 52% majority of millennials believed that racial discrimination holds Black people back. These numbers were much lower for the older generations, with only 36% of boomers finding this to be true. Perhaps older people owe their empathy to their demographic. While 79% of the silent generation and 72% of boomers were white, the millennial generation is much more diverse and only 56% white. This diversity could lend to the reason why millennials are more emphatically left-leaning on multiple social issues, like immigration and discrimination. However, these trends still stand true when looking at the views of only white people in each generation, furthering the argument that there is more of an ideological gap in age rather than race.

Finally, somewhere all generations mostly agree. Majorities across all four main generations find there is solid evidence of global warming. It’s important to note liberals across all generations are much more conclusive on this matter, ranging from 89-94% in agreement with evidence of climate change’s existence. Republicans, on the other hand, range from a much lower 46%-57%, with each party increasing with younger age. Also, the majority of Republican/right-leaning boomers and silents do not believe in climate change. The resounding opinion of liberals on this matter reflects the priority that the Biden campaign has placed on moving to green energy and cutting carbon emissions. The more divided opinion on climate change amongst conservatives reflects Trump’s prioritization of what our current fuel system is doing for the economy rather than making any changes.

The reason for extrapolating this data isn’t to say all old people are Republican Trump voters or all young people are progressive democrats. Just because these hard facts may prove the existence of an ideological gap doesn’t mean everybody fits into this generalization. Instead, it’s a guide for those infuriating moments at the dinner table or in a Twitter thread, when you just can’t understand why somebody isn’t seeing eye to eye with your ideals. It is also crucial to realize how we are victims of groupthink with people of the same age and to ensure that going into this election we are not blindly following the political beliefs of our peers of the same age. You, as a citizen in America, should form your opinions based on what you truly believe in. Now, more than ever, we need educated individuals to make their own educated judgments and use the power of voting to make these views heard.

Matthew is a senior in AHS.