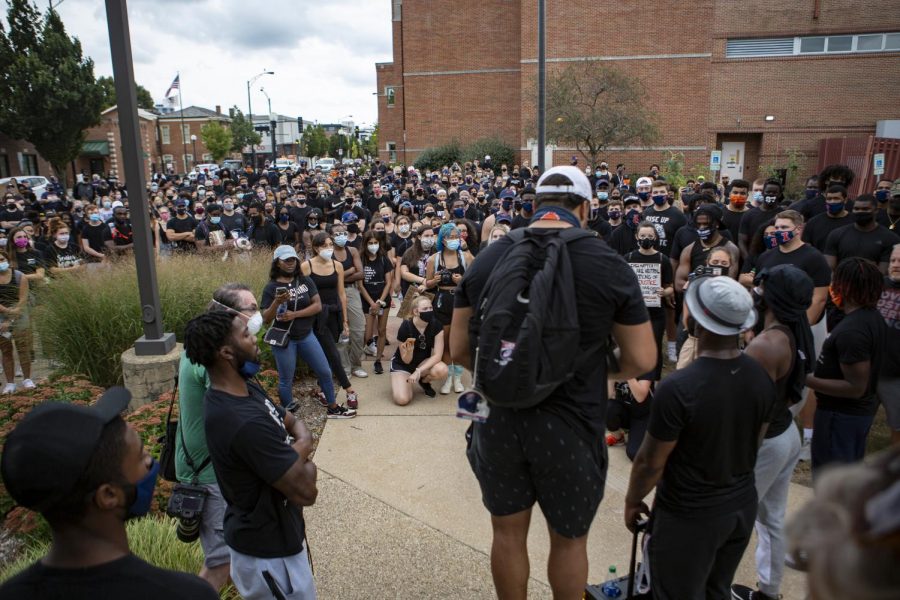 Members of the Illinois football team speak at the Champaign Police Department during a student-led Black Lives Matter march on Aug. 31.

This academic year has been unlike any other in history. Not only was there a worldwide pandemic that shuttered whole cities and countries, affecting all aspects of daily life, but there was also a nationwide movement calling to end systemic racism unlike the country has ever seen.
From the summer protests following the murder of George Floyd, calls on campus to defund University police, rallies to address anti-Asian violence and increased demands for University accountability — what matters now is what we do moving forward.
College is a time to figure out who you are and who you want to be. There’s freedom to explore what matters to you. And in the past year, students have shown up when it comes to calling for systemic changes to institutional racism, proving that this younger generation will lead conversations long into the future.
Graduates, it’s a challenging and strange time to be starting this next part of your lives. But it’s also one of the most important, given the movements in the last year. Now is the time to actively incorporate an awareness of systemic racism in job searches within the field and in all aspects of daily life.
For instance, some of the world’s top medical journals fail to address the impact of racism in the field of medicine. A study from Health Affairs showed that in the past 30 years, less than 1% of articles in the world’s top five leading journals included the word “racism.” And of this small percentage, the majority of the articles were opinion pieces.
In the context of the pandemic, we’ve seen how COVID-19 has disproportionately affected low-income communities of color in this country. Health care disparities are clearer than ever.
It’s incredibly crucial that this next generation of medical professionals understands the deadly consequences of institutional racism.
But it doesn’t just affect the field of medicine. It’s also our justice system, politics, education and science. The effects of climate change will also impact these underserved communities first, as natural disasters usually do.
Students graduating this year come from diverse backgrounds and fields. This year’s graduating class is full of future teachers, doctors, engineers, journalists, lawyers and so much more. The events in the past few years make you so valuable when it comes to dismantling decades of injustice.
Our education is only as important as what we do outside the classroom. It’s one thing to go to campus protests or have conversations over Zoom about the “model minority myth.” What matters is how we actually use these things to enact change.
So, while it’s been a difficult year for a multitude of reasons, it will no doubt be more difficult in the future. But there’s reason to hope because this generation can — and will — become leaders in many different ways.
As you walk across a socially-distanced stage, conquer college and reflect on the past four years, know that you’re joined by thousands of other individuals who are capable of using recent events as a catalyst.
This year’s challenges have only illuminated how crucial it is to make changes, and the graduating class of 2021 is uniquely positioned to do so in whatever industry graduates end up in. It’s time to continue the important conversations that have started this year into the future. Congratulations, it will be wonderful to see what you accomplish next.