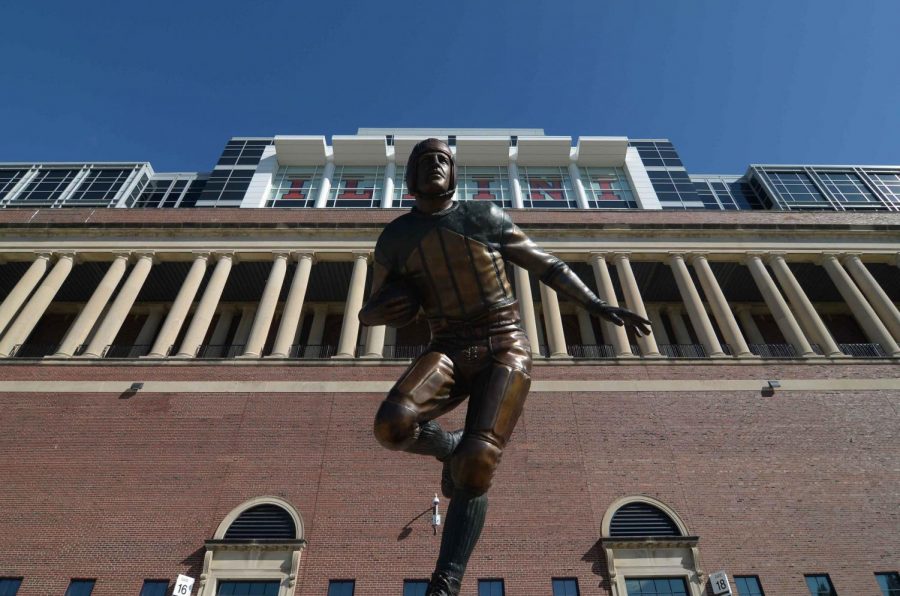 The Harold “Red” Grange statue is located near the west entrance of Memorial Stadium. Grange’s Homecoming Weekend game in 1924 is considered one of the best performances in the stadium to date.

A lot has changed on campus since the very first University of Illinois Homecoming in 1910. But one priority has stayed constant: football.

Hut-hut-HIKE. Here’s a look at the history of Homecoming through the face mask.

In 1910, seniors Clarence F. Williams and W. Elmer Ekblaw — the chief reporter for The Daily Illini at the time — decided they wanted to end their college careers knowing that they contributed something to the University. They decided to create a holiday in which the sole purpose was to connect the alumni to the students.

Though football was obviously the central event, they planned a few other community events for the holiday as well. Just like the creation of any new tradition, it was going to take time, but not as much time as you may think. By the middle of the year, Oct. 14-16 was approved as the official 1910 “Homecoming Weekend.”

The Illini defeated their greatest rival at the time, the University of Chicago Maroons, on Oct. 15  in 1910, for the University’s first of many Homecoming football games.

In 1911, the University decided that Homecoming should be an annual event and began planning for the second Homecoming.

The Homecoming tradition has continued as an annual holiday at the University, consisting of a variety of community events leading up to the football game. However, some years have proved to be more notable than others.

In 1918, Homecoming was shut down for the first time in history due to the influenza epidemic that was occurring at the time.

In 1923, the Illini defeated the Maroons again, marking the first Homecoming game to be played at the newly built Memorial Stadium.

Just one year later, the 1924 Homecoming football game served as a dedication to the students who fought and died in World War I. The dedication was intentionally timely, since Memorial Stadium had recently been built to include pillars engraved with the names of those students who lost their lives.

This dedication game on Homecoming of 1924 turned out to be more legendary than expected with the Illini’s star player, Harold Edward “Red” Grange, putting a total of six touchdowns on the board for what was called the “most spectacular single-handed performance ever delivered in a major game.” It remains today as widely thought of as the greatest performance in the history of Memorial Stadium.

Yes, this is where Grange Grove received its name. The statue in Grange Grove of the man holding the football is in honor of Red Grange and that special performance on that memorable day.

Although there have been several notable performances, one of the lesser known Homecoming games has earned its relevance to this year’s game.

With the Wisconsin Badgers returning for this year’s holiday, Illini fans are hoping for a result similar to the teams’ 1917 Homecoming match exactly 100 years later. This Homecoming Weekend fans will see if the Illini succeed like they did then.