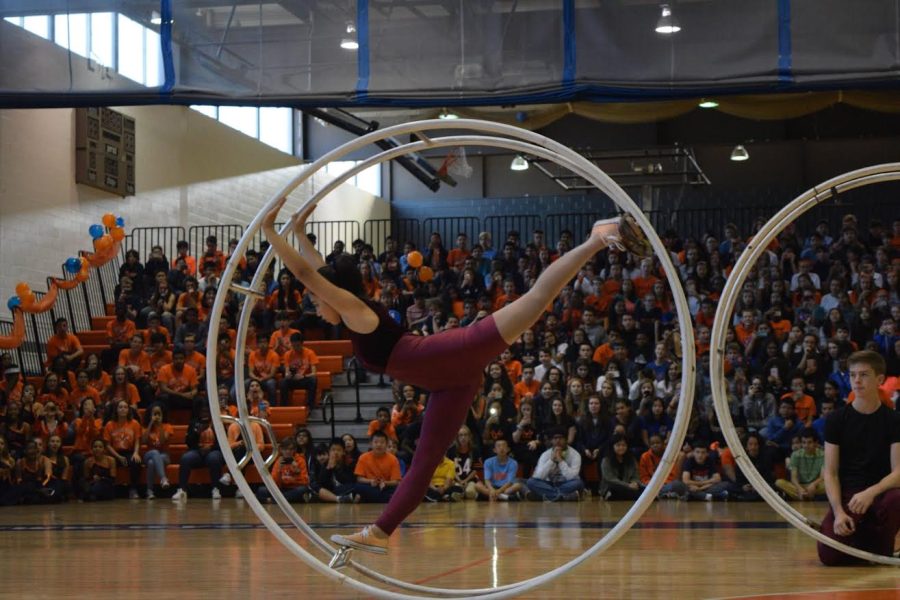 Mearieta Clemente is a Junior at the University who performs around the world as a wheel gymnast.

Mearieta Clemente is a junior at the University who travels across the world, from states such as Wisconsin to countries like Switzerland and Denmark. She performs in her circus, Chicago Wheel Jam, as a wheel gymnast.

How did you get involved in this circus work?

I started the summer after my sophomore year of high school. I had a friend who did it, and so I always go to his shows and things like that and I really liked it. I’ve always wanted to be in the circus when I was younger and I thought it was so cool and after he left for a study abroad for a year, I decided that was the perfect time to start so I wouldn’t embarrass myself.

What is the wheel?

The easiest way to explain it, although it annoys a lot of wheelers, is that it looks like a hamster wheel, but to the site where it fits a human and it has rungs like a ladder as well as boards to put your feet on and handles to grab onto to do tricks as it’s rolling.

What made you choose gym wheel in particular?

It was one of the easiest to join because the community there was really open to having new numbers. They really promote that anyone and everyone, regardless of age, status, things like that are welcome to try it, and I really liked that. I used the wheel the most because that’s the one I saw my friend do, and the one I had the most access to.

How would you say circus has impacted your life?

I love it. I think it really opened up my experiences and opportunities to travel and meet new people from all different backgrounds. I do get the opportunity to brag and say I’ve competed at the world level, and it’s a great conversation starter. I mean, people always ask what kind of sports do you do, and it’s always a real shocker. I love sharing it with other people. I think it’s made me more of a social and outgoing person as well because there’s the aspect of teaching and doing workshops and trying to spread the word about it.

Who inspires you to continue doing circus?

The first kind of obvious one would be my coach, he’s an eight-time world national champion national and international champion, which is insane. He’s from Germany, came over, started this cool company on his own and brought it from the ground up to where it is today, which is really admirable, he’s super kind social and the nicest person I’ve ever met. The second one would be one of my teammates, her name is Athena, and so we started at the same time. That was the person with who I would take classes with. She had a really bad injury partway through our time doing well, but she got up, she continued to do wheel despite injuries she went had surgery and like regardless of the psychological kind of like mental blocks of doing it. She slowly is like regaining the confidence to do real and regaining the skills that she lost and it’s amazing to see her grow as a person, and I get the chance to be part of that.