The man with a tale to tell 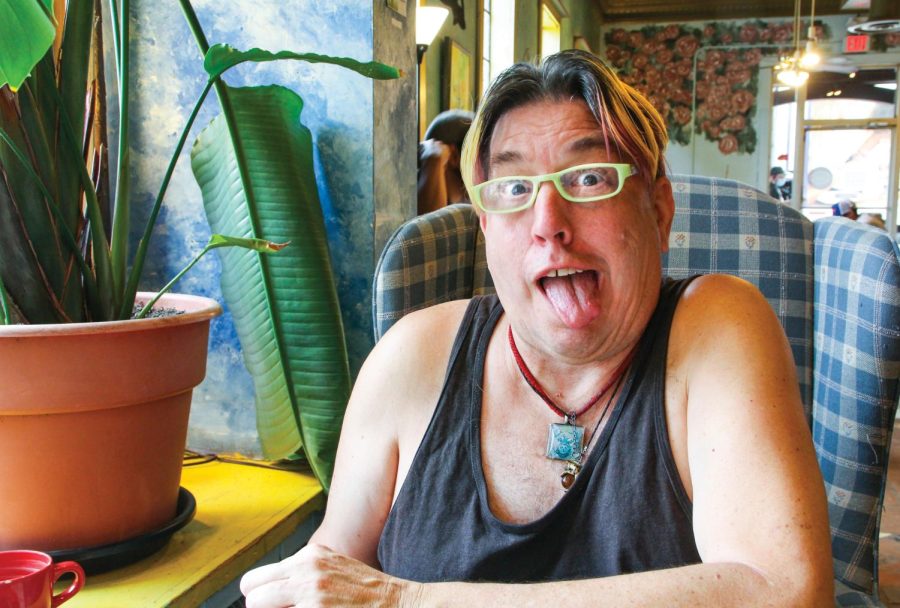 Hyena, a 54-year-old furry, wears a tail in public to express himself and change local prejudices against people who appear different from them.

Sitting in a blue armchair at Caffe Paradiso is a man with purple and yellow hair sipping a latte. He rises and his gray tank top sways as he walks toward the counter.

Other customers turn their heads and quickly try to snap pictures as he orders a tiramisu, laughing and marveling over a long, spotted tail swinging between his legs.

The man, 54-year-old Hyena, clips the tail onto his pants every morning to express a vital part of his identity and to change local prejudices.

Hyena is a furry.

“Even saying the word ‘furry’ people will go ‘What?’ and then look it up and go ‘Oh,’” Hyena said.

A furry is a person that wears costumes of certain characters — mainly animals. However, Hyena said all furries are different, and he feels as if it’s his responsibility to share all the different layers to clear misconceptions.

“About the only thing that all furries have in common is the word ‘furry,’” Hyena said.

“It’s my sense of responsibility toward the community that makes me want to make sure that there aren’t any misunderstandings.”

Most furries have a persona, or fursona, they use to interact with each other and express themselves. Hyena said fursonas aren’t just for role-play — they become a part of the person.

“People will think of fursona as playing a character but it’s not,” Hyena said.

“Fursona is bringing back things that have been shamed out of you, and as a result, you’ll be more outgoing, more conscientious, more agreeable and more emotionally stable,” Hyena said.

For Hyena, wearing a tale and sporting pictures of hyenas on necklaces and stickers on his laptop, is a way for him to make himself whole again.

When Hyena was young, he lived with his adopted parents in Washington. He said he began to suspect he might be gay but worked hard to hide the fact from his friends and family.

“I thought I was the only gay person in the universe,” Hyena said.

Hyena said being gay wasn’t something celebrated or even talked about when he was younger. He was anxious about others laughing about him if they knew he liked other men.

“At one point, after I decided I could be open to (my parents) about everything, I said ‘You know my childhood was really miserable Dad’ and he said ‘I had no idea,’” Hyena said. “Eighteen years I lived in (his) presence and (he) had no idea that I was that miserable.”

“We’re pretty reconciled and he’s an OK guy. I like him now.”

Hyena now has a partner who is also a furry and they have been together for 14 years.

However, Hyena didn’t come out to people until later on in his life when he began to meet furries.

In 2006, Hyena first met furries in Federal Way, Washington. Right off the bat he knew furries were people that could be anyone they wanted to be without the opinions of others.

Hyena said many budding furries are anxious at first.

“There’s that analogy with coming out of the closet,” Hyena said. “People are worried about ‘What will people say? What will people do? Maybe there will be violence.’ That’s what I grew up with.

“Actually everybody doesn’t give a shit really for the most part.”

It was the confidence and easygoing nature that attracted Hyena to the furry community. But when he started attending conferences, he needed a fursona.

At first Hyena was a yellow dog who was friendly, charismatic and liked a little bit of mischief. Later on, he became an aloof and prissy snow leopard.

But one day during a guided meditation at a conference, Hyena got a vision of a sun with the face of the hyena in the center.

“The moment (the symbol) appeared, instantly I think it even said ‘You’re a hyena,’” Hyena said.

Hyena said it felt as if he had been born again. He bought a necklace with a picture of a hyena and a tank top to commemorate his awakening.

Artists are an important part of the furry community because Hyena said it helps solidify the connection between person and fursona.

“Once it’s out of your body and on a piece of paper or something, then you can literally handle it,” Hyena said.

“When I became a hyena I felt like I had to come up with an image for it,” Hyena said.

That image became tank tops, green hair and of course — the tail.

Hyena referenced African folklore to create his image and personality.

“In African folklore, Hyena is the figure that can never do anything right in the eyes of other people,” Hyena said. “So when Hyena dances everybody says, ‘That’s stupid — you should be off doing something productive.’ So then we might ask ourselves, well why does Hyena dance?”

Hyena said if he can’t do anything right, then he’s not going to try. Like hyenas, he’s going to freely do what he wants to do.

However, Hyena said he’s privileged to be able to do this.

“I can be out as a gay person, I can wander around and wear a tail, but not everybody can,” Hyena said. “I’m a bigger white guy and people will leave me alone. But smaller people, women, people of color — they can’t necessarily get away with that.”

To address this and make a positive impact on his community, Hyena said he supports those that aren’t as privileged through his purchases.

“One of the things that I started doing was spending my food money on businesses of color first, local businesses second and anybody else third,” Hyena said.

Hyena has been editing dissertations for students at the University of Illinois at Urbana-Champaign since 2009 where he also tries to help others with less privilege.

“I like supporting women and people of color’s original research into the world,” Hyena said.