Tailgating 101: What you need to know 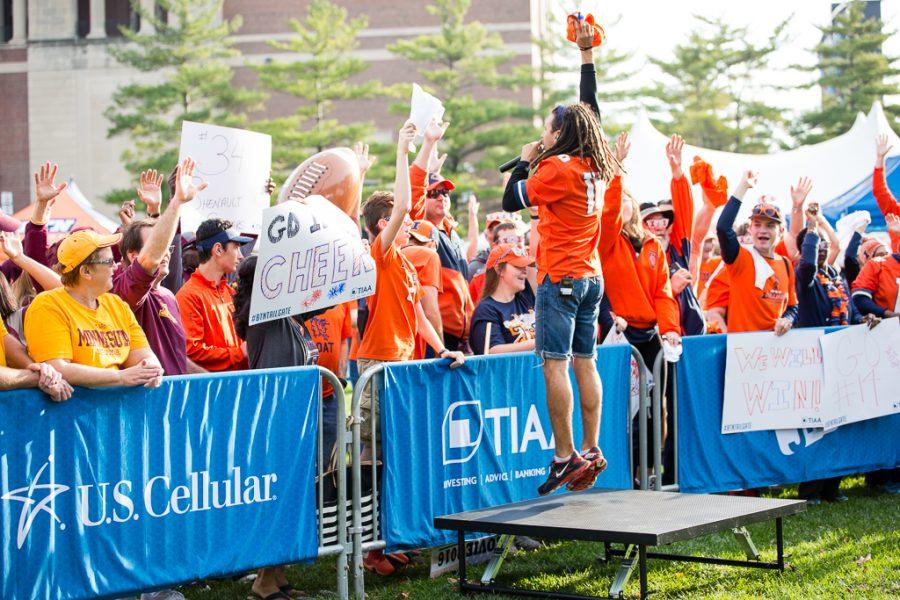 Illini fans dance during the Big Ten Tailgate before the game against Minnesota at Memorial Stadium on Saturday October 29.

While the football players are busy with their pre-game rituals, the fans participate in one of their own: a process known as tailgating.

Tailgating is essentially when a group of fans make food and often drink a lot of beer in the parking lot of a stadium, which in our case is Memorial Stadium.

Although the majority of the University’s students are under 21 – the legal drinking age in the United States – there are plenty of tailgating rituals that underage students can participate in, one of which being the food.

To join in on the fun, make sure to arrive early. Tailgating can be an all-day experience. If the game is at noon, some begin to arrive around 6 a.m., but tailgating generally begins three hours before kickoff.

Block I, the student spirit organization for football, hosts a tailgating event in Grange Grove that provides free food for students with an Illini Pride membership, so arrive with an appetite.

There are also footballs and frisbees to throw around, along with some bean bag toss set up for light entertainment.

Of course, it is an essential to be decked out in an obnoxious amount of orange and blue. Even if you are just there for the food and friends, the colors are crucial. If you don’t already own an insane amount of the Illini colors it isn’t a big deal, because multiple free shirts will be thrust in your face.

Some of the more seasoned Illini fans wear orange and blue overalls with a wig to match. You’ll also see the Block I student section leaders in their white jerseys.

The most important part of a perfect tailgate is the perfect playlist. This playlist usually consists of some upbeat, feel-good music. There is also live music by various local talent to listen to, and for the past few years, the Division of Intercollegiate Athletics has held a free concert for the homecoming game.

With all the good vibes and feel-good atmosphere, people do tend to get a bit rowdy, but don’t get alarmed because everyone is too happy to be anything but nice.

About an hour and a half before the game starts, the Illini marching band parades through Grange Grove followed by the football team, who stop to sign a few autographs and take some pictures with the younger fans.

Some more experienced tailgaters would consider the act less of an art and more of science, but all in all it is just a good time among friendly people.

Make sure to take all of your energy into the game and cheer the Illini to victory.

Tatiania is a sophomore in Media.