Breaking down the Illinois Basketball 2017 schedule 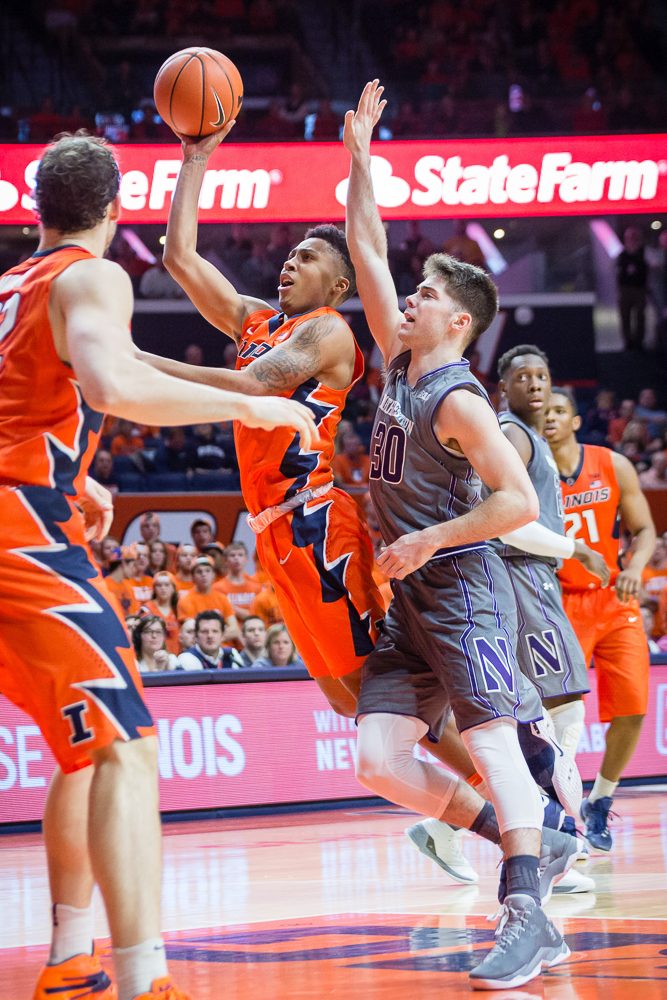 Illinois’ Te’Jon Lucas (3) puts up a floater during the game against Northwestern at State Farm Center on Tuesday, February 21.

As students return to campus and the start of class draws near, so does the start of a new era of Illinois basketball.

After firing John Groce, the former head coach, and bringing in Brad Underwood, the Illini are ready to turn the page and return to competing with top-level programs.

With that being said, the full schedule has been released, so let’s take a look at what we can expect from the Illini this upcoming season.

As a whole, this year’s non-conference schedule is pretty weak. It features multiple games against smaller schools such as Southern University, Tennessee-Martin, North Carolina Central and more.

This could come back to hurt the Illini if they end up on the bubble when March rolls around, but I honestly think that it is a smart move. With Underwood coming in and teaching a whole new system, it could take some time for the team to make the proper adjustments and effectively play in the new system. Games against lesser competition will allow them the time needed to adjust and prepare for a tough Big Ten slate.

Also, it’s worth noting that not the entire schedule is filled with weaker opponents. Three non-conference games that really stand out to me are Wake Forest, New Mexico State and Missouri.

All three of these games will come on the road and are definitely the toughest early challenges for the Illini.

The Demon Deacons are coming off of a 19-win season in which they made the NCAA Tournament but were bounced by Kansas State in the first round. Demon Deacons is returning two of its top three scorers in Bryant Crawford and Keyshawn Woods. So while this may not have the hype of the matchup back in 2004, this could prove to be a big game and a nice game on the resume come March.

The Aggies are coming off of a 28-6 season where they made the tournament but fell in a tough loss against No. 3 seed Baylor. They lost their top two scorers, but the Aggies are still not to be underestimated. Last year at home they boasted a 16-1 record, so picking up a win out west would be big for the Illini.

This year’s Braggin’ Rights game has much more hype than in recent years, and that is for a good reason. First of all, both programs will be in the first year of new coaching regimes. Underwood and Cuonzo Martin will be looking to make an immediate impact in taking steps to bring both programs back to their former glory. Another reason is the flip of former Illini-commit Jeremiah Tilmon to Missouri. Tilmon was initially set to headline a strong recruiting class from former coach John Groce, but after Groce’s termination he decided Illinois was not the right fit — eventually landing with Martin at Missouri. The Tigers are also bringing in the nation’s top recruit — Michael Porter Jr. — who many have picked as the early favorite to be next year’s number one pick in the NBA draft. This will be probably the toughest non-conference game and has the potential to be a huge resume builder if the Illini can grab a win out in St. Louis.

Though the non-conference schedule is slightly weaker than normal, there’s no way to discount the strength of the Big Ten this season. In the most recent preseason rankings, four Big Ten teams — Michigan State, Minnesota, Northwestern and Purdue — are ranked in the top-25, highlighted by the Spartans at No. 3.

Top to bottom the conference is as strong as ever, as that top four does not even include the likes of Michigan, Wisconsin, or Iowa, who have been tough in recent years.

That said, three games that stand out the most to me are Northwestern in Rosemont, Michigan State at home, and Purdue at home.

After a short run in last year’s NCAA Tournament, the Wildcats have found a way to stick in the preseason top 25. As the first Big Ten game of the year, this will certainly be a tough test for the Illini and could serve as a good indicator of how the conference season will go. Last year the Illini were able to win both matchups with the Wildcats, but this is a tough team that is bringing back a good amount of experience and plenty of talent.

Michigan State is a huge game for obvious reasons, and as of now, it looks to be the toughest game on the schedule (besides the matchup in East Lansing). They’re bringing in another strong class thanks to head coach Tom Izzo, and returning Miles Bridges doesn’t hurt either. Bridges is probably the early favorite to win Player of the Year, so this will be a very interesting game to watch the young guns of the new system match up with top national talent.

Purdue suffered a huge loss with Caleb Swanigan going to the NBA, but this is still going to be a tough team. But, at the same time, they still have a really strong team featuring the likes of Isaac Haas, Carsen Edwards and more weapons that will make them a strongly competitive team and a lock for the NCAA tournament. Purdue is also Illinois’ second to last game of the regular season, so the implications could be huge if either team is on or near the bubble when March rolls around.