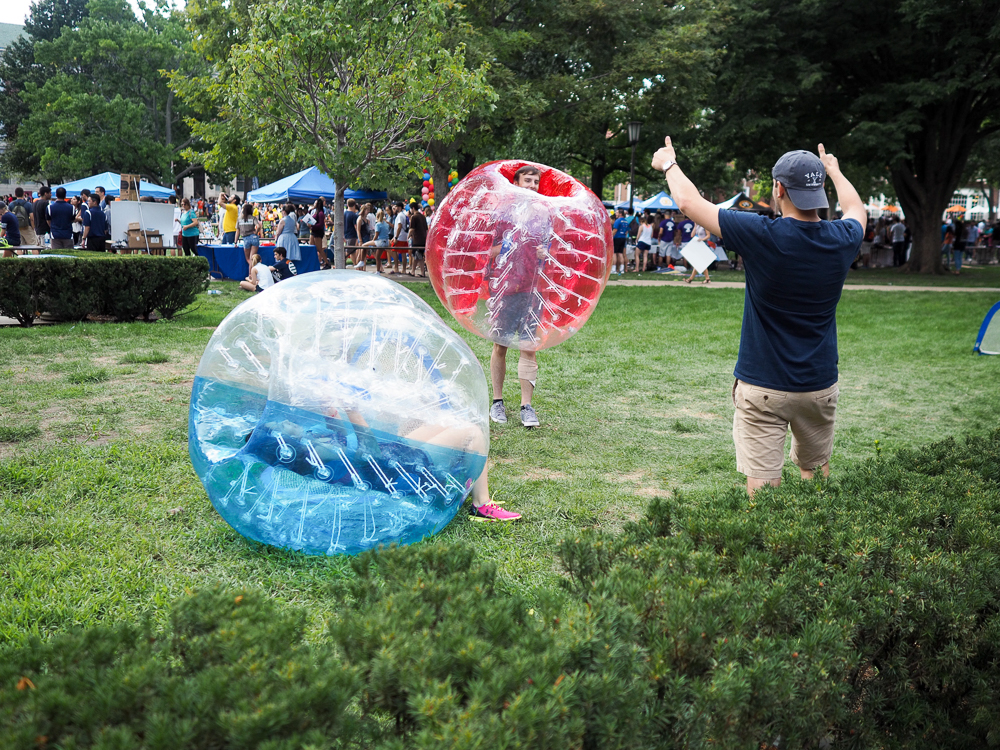 Walking into Quad Day as a freshman can be a very overwhelming task. Hundreds of booths line the sidewalks of the Main Quad, each one representing an entirely different organization on campus.

Sorority women parade their house’s T-shirts, restaurant employees hand out coupons and registered student organizations (RSOs) exhibit unique ways to promote their organization to prospective members. From the Adventure Club to the Student Council, there are endless options and hundreds of opportunities to choose from.

It is not hard to understand why this is seemingly a daunting endeavor.

As an incoming freshman, Anna Maturski did not think she would one day become the president of Big Brother Big Sister UIUC. As she approached the RSO’s booth on Quad Day in 2015, the idea of one day being a leader seemed so far away.

Today, Maturski is a junior in Education and the president of Big Brother Big Sister UIUC. Maturski is a leader to more than 30 members in her growing RSO. She said she feels it is important for all incoming freshmen to sign up for a few different RSOs on Quad Day and get involved right away.

Maturski also said it is a good idea to begin building your resume at the start of your college career, instead of waiting until it’s too late. Without the courage to join Big Brother Big Sister UIUC two years ago, Maturski would not be in the leadership position she is today.

Maturski decided Big Brother Big Sister UIUC was perfect for her because it peaked her interest and diversified her portfolio.

“You have a hobby, and you’re doing something other than studying,” Maturski said. “You can be on a committee; you can be on (the executive board). It definitely bumps up your resume.”

Sam Fishman, sophomore in Education, became president of Autism Speaks as a freshman. More specifically, Fishman is the reason Autism Speaks made its return to campus last year.

Autism Speaks is an RSO with a mission to “increase understanding and acceptance of autism spectrum disorder.” In addition, Autism Speaks aims to study the causes of autism and connect with families affected by the disorder.

“My job has been starting it back up again and finding officers to fulfill the different roles,” Fishman said. “I’ve been in constant contact with the national office just to go over what needs to be done, and it’s a new situation. I’ve never started up an RSO, obviously because last year was my first year.”

Fishman came to the University with the hopes of joining an RSO that directly connected to his major — special education. He never expected to become an officer during his freshman year, let alone becoming the founding president of the Illinois chapter.

The RSO still does not have a faculty sponsor, but they hope to find one this year. So far, Fishman’s biggest struggle has been the lack of older leadership and guidance through hard times. He was able to get in contact with the RSO’s former president when Autism Speaks was on campus before, to get some helpful advice.

Fishman said this experience has taught him a lot about how to be a leader and shown that it’s possible to take on large leadership roles at a young age.

“There’s still going to be surprises around the corner, and you’ve just got to work around those,” Fishman said. “It’s been a very positive experience so far, so I’m very happy with it.”

Currently, Autism Speaks has around 20 active members, but Fishman said he hopes to recruit about 20 more by the end of fall semester.

Autism Speaks will have a Quad Day booth. Fishman hopes to show incoming freshmen, along with the rest of the student body, just what Autism Speaks does for the community.

“I want people to know what autism is and about how truly cool people with autism are and what they bring to society,” Fishman said. “What we’re going to do as a chapter at Illinois is raise awareness for people with autism. Just to show what they can do and how amazing people they are.”

Just like Fishman, Nicole Letourneau, junior in Education, played a pivotal role in her RSO’s campus image. Letourneau is the president of Headbands for Hope, which is currently entering its second year on campus.

Headbands for Hope is an organization that sells headbands to students and community members. For each headband sold, another headband is donated to a child with cancer.

Letourneau is not the only president of the RSO but a ‘Headband Hero’ as well, which means she hosts trunk shows around campus.

“Freshman year, I was just so focused on trying to get used to everything, and I knew I wanted to join an RSO,” Letourneau said. “I didn’t know I was going to be able to have such a strong leadership position so early on and I’m so excited that I did. It’s something that I love to do, and I’m going to continue the rest of the time I’m at U of I.”

Letourneau said it was important to her to join an RSO that allowed her to give back to the community and at the same time gave her some experience working with children.

Being a new RSO, Letourneau understood there would be many opportunities to grow in leadership within Headbands for Hope as well.

“I think it’s important because it’s a great way not to get stuck in your bubble, and be able to impact and make a difference through others,” Letourneau said. “It’s such an easy way too because our campus has so many RSOs.”