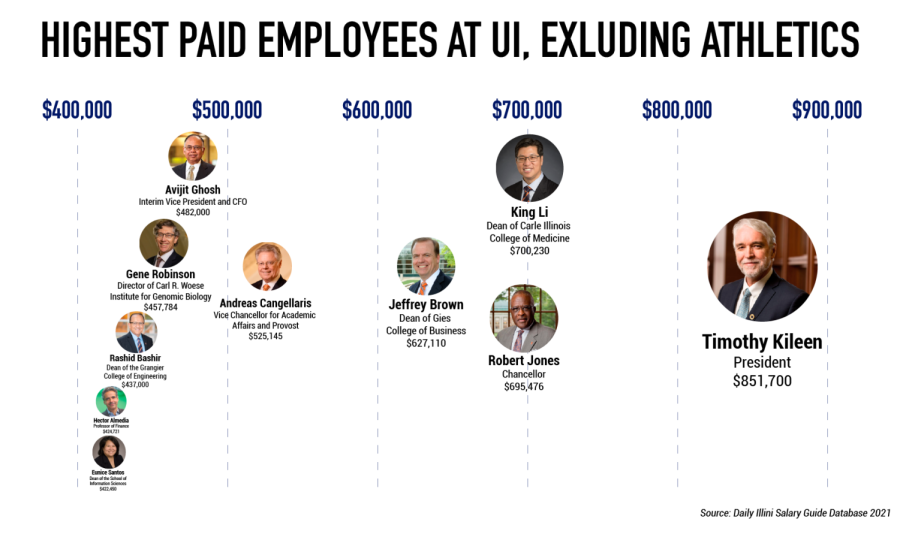 Among the top earners at the University, excluding the school’s athletics, are University and system leaders, such as deans of colleges and executive officers.

Illinois athletics are excluded because coaches and leaders comprise the majority of the top ten highest paid.

Four are deans of colleges at the University and two are professors who also hold leadership positions within their respective fields.

Timothy Killeen, president of the University of Illinois System, is the highest earner in the system. Killeen earns $851,700 a year and his salary saw a $16,700 increase from last year.

Killeen’s salary is half of the highest-paid president in the Big Ten schools, Northwestern University’s President Morton Schapiro. Schapiro made $1.59 million last year, according to public data.

Killeen’s salary is near the median of Big Ten schools’ president salaries. The lowest-paid Big Ten president last year was University of Wisconsin’s Tommy Thompson, who made $489,334.

Eunice Santos, dean of the School of Information Sciences, is the only woman on the list of top ten highest paid when excluding athletics.

Other colleges represented are the deans of Gies College of Business and the Grainger College of Engineering, Jeffrey Brown and Rashid Bashir, respectively.

Heitor Almeida, professor of finance, and Gene Robinson, professor of entomology and director of the Carl R. Woese Institute for Genomic Biology, are the only top-earning individuals who do not hold a dean or executive University position.

All of these individuals are also tenured professors in their affiliate positions in various University colleges.