Locksmiths are key to campus safety 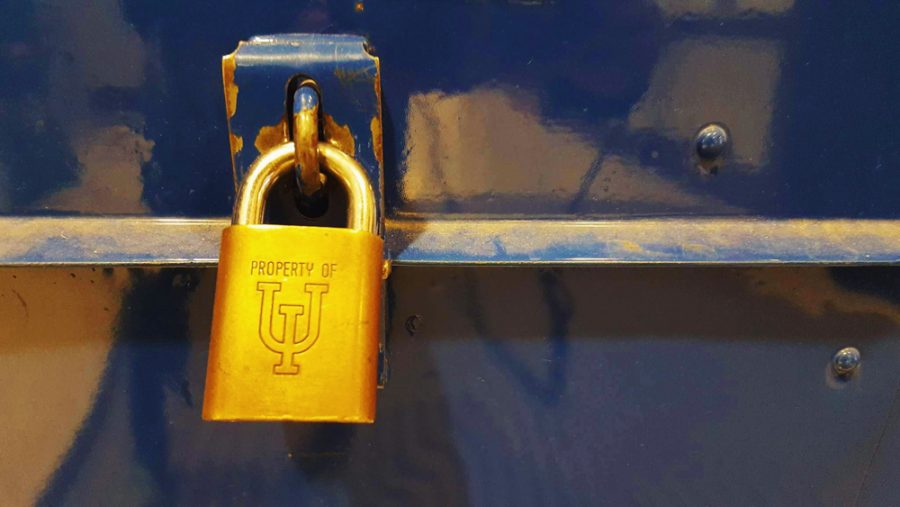 A lock of the University of Illinois at Urbana- Champaign on a mailbox in Lincoln Hall.

It’s 8:30 Wednesday morning, and there’s already a line out the door at the key shop in the Facilities and Services building. Rows of shining keys hang from a large corkboard behind the counter, and even more large rings covered in keys fill a side room.

The key shop is home to the seven locksmiths that handle every lock on campus, so their services are in demand 24 hours a day.

“Here at the U of I, anything that’s got a lock on it, we service. That means everything from the buildings that are 100 years old with locks that are 100 years old up to the new access control systems and everything in between,” said Richard Allen, a locksmith who has been working for the University for nine years. He’s been a locksmith for 30 years.

Allen, like all of the locksmiths, began his training through an apprenticeship.

“Most locksmiths don’t have any pre-training. It’s almost all on-the-job training. Someone takes you under their wing and teaches you what you need to know. There are some schools, but for the most part, schools don’t teach you enough to really go out and do the job. You have to have someone who will train you and teach you everything you need to know,” he said.

This training can be especially complicated at the University because of the wide variety of locks that need to be fixed. There is no manual, so the learning process tends to be very involved.

“You’re going to be under water for the first six months. I guarantee you won’t have any clue as to what you’re doing for six months, and then maybe you’ll start to float for a little bit, and eventually you’ll reach a point where you’re able to do something, but I’d say it’s a good year, year-and-a-half before you’re really able to go out and do anything by yourself comfortably,” Allen said.

There are over 600 buildings on campus, and many of the older buildings have locks that can’t be replaced.

“There’s definitely not any parts available for most of them, but the things that you will find is that a lot of the hundred year old locks still work absolutely fine. They may need a little lubrication, a little something to keep them going. I can guarantee the stuff that’s being made today won’t be here 100 years from now,” Allen said.

Most of the doors on campus have  a mortice lock — a specific type of lock that fits in an opening carved into the door. Each lock is sized differently, which means the locksmith must sit down and figure out what specifically needs to be fixed. If a door needs a replacement lock, a locksmith may use woodworking to rebore a new pocket to fit the lock.

Newer buildings have the added challenge of electronic locks.

“Thirty years ago, there were no electronic locks … today, as we start to see things moving more and more toward electrified, the position is showing more and more requirements for basic electricity and understanding of current. It’s going to change again, I’m sure, as time goes by,” Allen said.

There’s no “typical day” for a campus locksmith. Though work orders are issued at the beginning of the day, emergencies need to be dealt with first.

“This job is very much reactionary. It’s not something where someone says, ‘Oh, my lock’s broken,’ that you can put them on the schedule for next week. We go and we fix it as soon as possible, and it’s almost always the same day,” Allen said. “It’s always variable, which is one of the things that’s nice about the job: you never know for sure what you’re going to do.”

The only standard thing is the schedule: locksmiths follow the University’s employee schedule for each day. However, there are always a few employees on call to handle emergencies at any hour. The locksmiths are called in directly by the police if there’s an issue after hours.

Most of the emergencies have to do with  professors being locked out of their classroom or a key not working correctly.

The main after-hours emergency is an exterior door not locking, meaning the building can’t be secured. The locksmith will find a temporary solution until something permanent can be done the next morning.

Much like the locks, no emergency is exactly the same.

“The biggest thing about this is because it’s a university, you never know what you’re going to deal with. If you get into some of the animal rooms and some of the interesting animals, if you go out to Vet-Med and happen to be whatever large animal they might be working on at the time, you never quite know what you’re going to run into,” Allen said. “It’s a constant variable, you just never know, especially with a campus this large.”

It’s only 9 a.m., but John Vincent, an Engineering alumnus who has worked at the locksmith shop for 11 years, has already been notified of an emergency situation. Someone in a hoodie has gotten into a concessions room. No money has been stolen, but the room may need to be rekeyed if the keys have gotten into the wrong hands.

“Our shop actually is down on manpower even from what we were 15 years ago,” Vincent said. “We’ve got a lot more buildings now to cover than we ever did before. Campus keeps growing, security’s more of an issue, yet we’re still trying to get by with less employment.”

The shop had eight locksmiths until October, when one retired and was not replaced.

“We could always use more people. Whether or not we get more people, I don’t know. Depends on the budget, I’m sure,” Allen said.

The locksmiths are paid a $59,987.20 yearly salary, according to the University’s grey book.

“Salary rates and ranges for locksmiths are regulated by the policies and personnel programs of the State Universities Civil Service System based upon subscribed skills, experience, training and education,” Steve Breitwieser, who handles communications for Facilities and Services, wrote in an email.

Though the pay grade is roughly the same as that of University administrative aides and assistants, the locksmiths are all working on campus for a reason.

“We’ve all gravitated to this position because it’s a good position. Pay and benefits are good. We have no real complaints there,” Allen said. “I think it’s a good profession. I mean, it’s paid my bills for a long time. I don’t know where it’s going in the future, I think they’re always be a locksmith position.”

Though many students on campus might not be aware that locksmiths even exist, locksmiths have influence over all of the master systems that protect the buildings.

“While many at the University have experienced work by the locksmiths firsthand when requesting and obtaining new keys and copies or repairing locks or door hardware, their services and contributions are numerous,” Breitwieser wrote.

The necessity of working with locksmiths firsthand is part of the reason why most students will likely never interact with them.

“Unless you physically deal with us on a daily basis, you’re not going to know, but the minute your lock doesn’t work, you really want the locksmiths to come solve your problem, and then you realize that we are here,” Allen said.