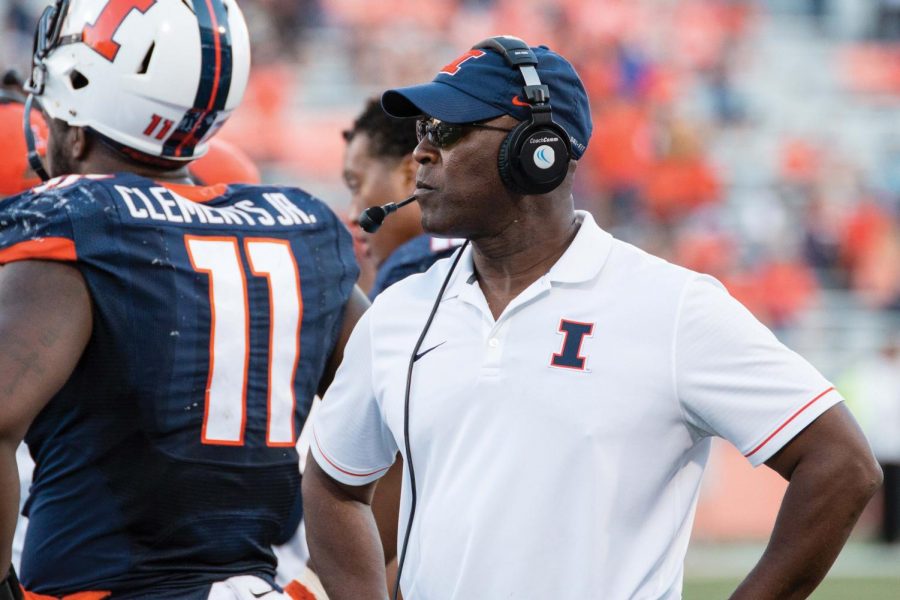 Illinois head coach Lovie Smith walks down the sideline during a timeout in the the game against Western Michigan at Memorial Stadium on Saturday, September 17. The Illini lost 34-10.

It’s easy to assume that some professors and students took issue with Lovie Smith signing his six-year, $21 million deal with Illinois in 2016.

They probably have more issues with it now that Smith has led the team to five total wins since the 2016 season.

I understand that the team is struggling right now.

I understand that not as many fans are filling the stadium right now.

And I understand that Illinois is last in the Big Ten right now.

But that’s going to change.

Director of Athletics Josh Whitman helped bring Smith to the University as a part of his “#WeWillWin” campaign, which is not limited to just football.

Whitman has laid out all pieces of his plan for programs to have future success. He hired well-respected coaches in women’s and men’s basketball, volleyball and women’s gymnastics.

Hiring Smith to take over for the dumpster fire that was Illinois football should get fans excited, despite the current failures the team is experiencing.

People should understand that this losing should be expected.

Smith did not coach any of his recruiting class in his first year. Rather, he was coaching many players who would have fit better playing in the MAC for former Illinois head coach Tim Beckman.

This is essentially Smith’s first year, but people still should not shallowly judge why he is making so much money. Illinois has started 16 true freshmen this season, which leads college football.

He is giving his players valuable Big Ten experience, which should help them become more comfortable facing similar teams next year and the year after that.

Having Cam Thomas and Mike Epstein in the backfield for the next few years should give fans hope that the program is on the right track.

But, patience is key with a rebuild.

Fans want to see immediate success just because Lovie Smith is Illinois’ coach. But it just doesn’t work like that.

Smith and the rest of the coaching staff will have an important offseason coming their way to further develop the young players. It’s a process.

When Illinois becomes good — which should be in two or three years — people should understand why Smith is getting paid so much.

Fans will fill the seats, producing revenue from ticket sales, parking, merchandise, campus traffic, etc. Because the football program brings in so much money for the school, Smith deserves the salary he receives.

Now, if the Illini are not winning eight or nine games by 2020, then those professors and students have a valid point.

But all signs are pointing to that not happening. The team will have many different weapons on both sides of the ball who have already shown glimpses of their potential.

So, yes, Smith is getting paid based on the in-depth and optimistic future plan for the program.

If Illinois football is not in the top half of the Big Ten in two or three years, the University lost $21 million.

I think Whitman’s leadership, along with Smith’s recruiting, will help keep that from happening.