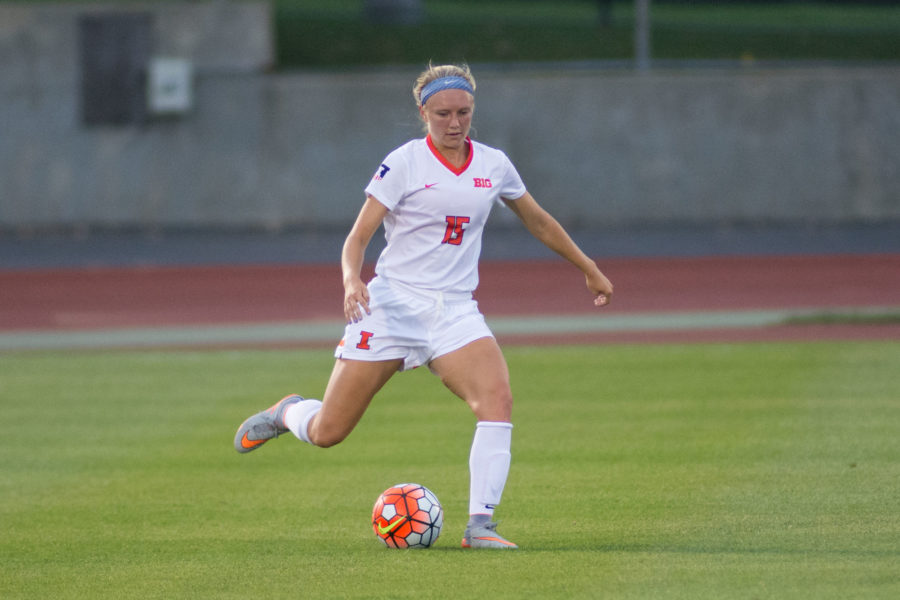 Hope D’Addario sends a pass down field during Friday’s game against TCU.

The Illinois soccer team is returning to campus with a 5-1 record following its West Coast trip this past weekend.

The biggest take away that head coach Janet Rayfield alluded to was her teams’ critical decision making on the attack.

“If you look at the number of shots that we’ve taken and the amount of goals we’re scoring, we’re pretty selective,” she said.

Rayfield’s intuition has numbers to support it.

Illinois has put 63 shots on goal over its first five games, scoring on fifteen of those chances.

The mindset is headlined by redshirt senior Jannelle Flaws.

Flaws has repeatedly told reporters that she expects to convert when an opportunity presents itself. That is always her focus, and it seems to have rubbed off on her teammates.

Regardless, Rayfield believes the Illini have room to grow on the offensive side.

“We can ask a higher level from ourselves, technically,” Rayfield said. “We can connect more passes and therefore be more dangerous.”

Defense thriving for Illini early on

Illinois has converted on 40 percent of its scoring opportunities this season, but perhaps equally — if not more — impressive is the flip side of that statistic.

The Illini have allowed 32 shots on target in their first five games but have only allowed six goals.

That comes out to an 82 percent stoppage rate, with opponents scoring on approximately 18 percent of scoring chances.

She said she felt that her team let the Washington game – in which they suffered their first loss of the season – slip away.

“A 2-1 loss is something where you know you were in that game, and that it could’ve been in your hands, but it wasn’t,” D’Addario said. “We went into Portland knowing that we wanted to take the game into our hands right away.”

While the offense has been successful, it all starts on the defensive side of the ball for the Illini.

Rayfield said she was happy leaving the team’s West Coast trip with at least one win.

While she acknowledged that the Illini could have played more consistently, she noted that a few players stood out.

The first is D’Addario.

Rayfield applauded the junior for her work in organizing the team’s back line on Friday — covering defenders, getting in the way of shots and blocking ones when necessary.

“I think her mobility on the back line was really critical for us on Friday night, to stay within reach of Washington and put ourselves in position to be in that game late,” Rayfield said. “She’s got some young players around her.”

Despite a young surrounding, D’Addario uses her experience to guide the underclassman and ensure success.

Rayfield referred to D’Addario as the team’s unsung hero.

The next player that Rayfield singled out was redshirt junior midfielder Taylore Peterson.

“I think her defensive presence, coming back off of the injury she suffered last year, and having the defensive presence she has in the midfield, those are the two that I think had great weekends,” Rayfield said.

She went as far as to say that there is not a player in Division-I soccer that defends like Marbury.

“From the front to the back, this team has a defensive grind about them,” Rayfield said. “That’s going to help us going forward.”