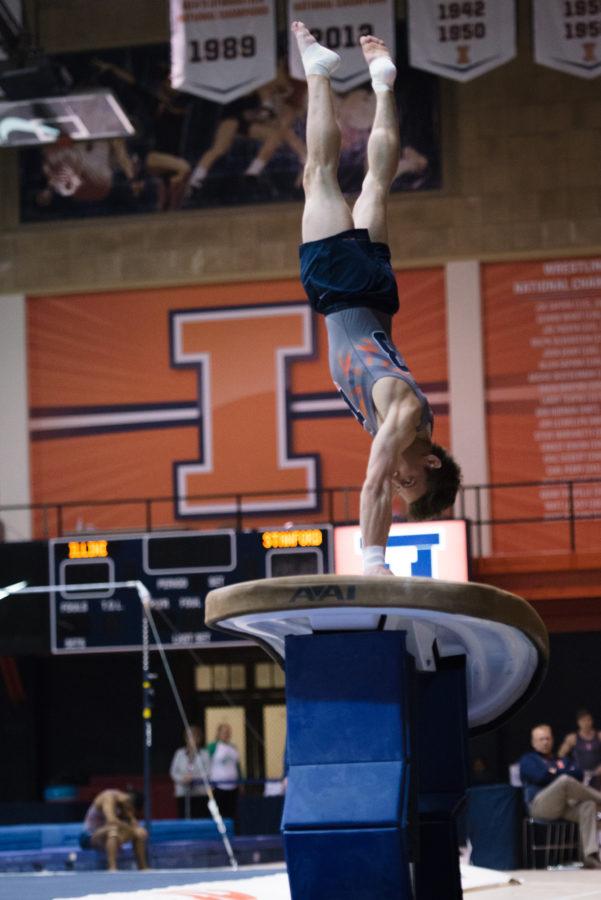 Illinois’ Bobby Baker launches off the vault during the meet against Stanford at Huff Hall on Friday, March 6, 2015.The Illini lost 21-9.

On the day Penn State unveiled its 2015 Big Ten Championship banner — which it earned by beating Illinois by 0.6 points at last year’s tournament — the Illini were not able to exact any revenge on the Nittany Lions, suffering another close defeat, 430.200-429.200 on Saturday.ss

The one-point loss was Illinois’ first this season after it started 7-0.

“They need to be beat up after this,” said head coach Justin Spring. “If you walked into this meet laughing and having fun, thinking this wasn’t a big deal, then I don’t understand where your head is at.”

Sophomore Bobby Baker attributed the loss to a lack of production from the team’s top gymnast.

“We had our full lineups,” Baker said. “(But) when top guys and all-arounder’s don’t do their best, this is what happens.”

Things started well for the Illini, who began their day on pommel horse, posting a team score of 70.850.ss

Baker was the first to compete, and the sophomore set the tone early, earning a score of 14.350.ss Senior Logan Bradley added a score of 14.500, and sophomore Brandon Ngai won the event with a score of 15.250 — his third career pommel horse title in as many weeks.ss

“He brings a tremendous amount of purpose to his training,” Spring said. “He trains at that level all day every day, so when he shows up at the meet, there’s no difference.”

Spring said Ngai makes a conscious effort to maximize his potential, but questioned if others on the team shared the 17-year-old’s level of intensity.ss

Sophomore Chandler Eggleston secured titles in the Illini’s next two events — floor exercise and vault — with scores of 15.350 and 15.050, respectively.ss

Eggleston’s scores, coupled with strong performances from the rest of the team, propelled the Illini to a 0.650 lead over the Nittany Lions to start the fourth of six rotations.ss

On still rings, freshman Alex Diab earned his first career title, and Illinois’ fourth and final crown of the day, with a score of 15.300.ss

Leading by four tenths with two events to go, the Illini began to unravel.

Those low scores contributed to a 2.45 point swing, putting Illinois behind heading into the final event.ss

Jacobson and Baker tried to make up for their errors, earning team highs of 14.700 and 14.250 on parallel barsss, but their efforts came too late as the Nittany Lions competed well enough in their last event to edge the Illini by one point.

“This burns me up inside. I get really upset. I am very competitive, and I take it personally,” Spring said. “We gave this one away.”