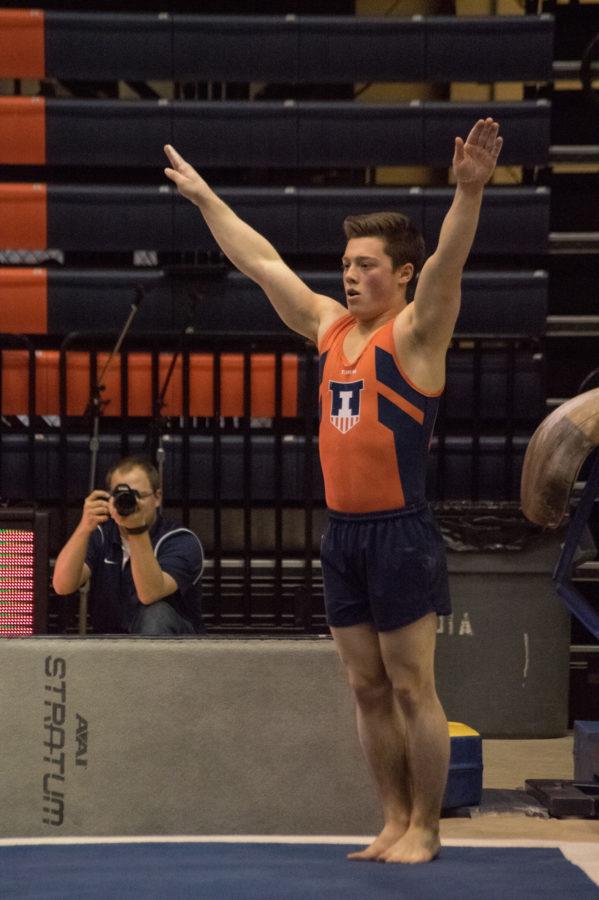 Illinois’ Alex Diab performs his routine at the meet against Michigan on March 12, 2016.

Once again, the Illinois men’s gymnastics failed to capture the top trophy in the Big Ten championships this past weekend.

Finishing runner-up to Penn State in last year’s championships, the Illini were in Columbus, Ohio, looking to avenge that close loss – one in which they were defeated by 0.6 points.

This time around, the Illini bested the Nittany Lions and held the lead for a good portion of the competition, but eventually fell to Ohio State, 434.450-429.700.

“It’s the little things,” head coach Justin Spring said on the second place finish. “Looking back at the meet … we were pretty sloppy on our landings.”

Spring added that his team’s dismounts cost them a lot more than other teams in the meet, specifically Ohio State. The Buckeyes were able to combat some of their poor landings with several other perfect dismounts, but the Illini couldn’t do the same.

“The difference of a three-tenths step, with the absence of a two-tenths stick bonus, there’s your points,” Spring said. “(They’re) major points and it’s been a detail that’s been there for the majority of the middle part of the season and just for whatever reason we’ve been a little off.”

Sophomore Brandon Ngai was not who Spring had in mind when talking about his team’s mishaps. Beginning the day for the Illini on pommel horse, the 17-year-old event specialist notched his eighth title in the event this season after scoring a 15.540 on the apparatus. Ngai led the Illini to a team score of 71.450 and had them sitting in second going into the second rotation.

On still rings, Illini freshman Alex Diab did not let the bright lights get to him. The 5-foot-2 all-arounder showed why the event is his favorite and arguably his best. He led the way for Illinois with a score of 15.100 and helped maintain its second place standing.

“I was a little nervous,” Diab said. “(It’s) a huge meet. My first Big Tens ever, trying to win a team title. I don’t think it affected me too much … I tried to use the nervousness to my advantage.”

This event, coupled with a few more strong performances, including a team-high 14.950 on the floor exercise, allowed Diab to finish the day in 7th place in the all-around competition.

After its fourth rotation, Spring’s squad was in first place after competing well on vault and parallel bars but only managed to score a 67.700 on high bar – its lowest score of the day.

With one event remaining, the aforementioned Diab led the way for the Illini during the floor exercise – helping his squad bounce back with a score of 72.000.

Illinois ended its day in the lead, but with a bye rotation ahead of them and several teams yet to finish competing, it was a waiting game to see which team would come out on top.

“You kind of punch the numbers really quickly to see what teams need … to beat you,” Spring said. “And then you sit back and you watch. We watched Minnesota have a couple not-so-great routines on pommel horse, so we stopped worrying about them. But right in front of us, we saw Ohio State.”

Ohio State finished its evening on floor, one of the team’s best events, and would eventually win its first Big Ten title in nine years.

Spring hoped that the “stars would align,” so that his team would pull out the victory, but for the second year in a row, the Illini came up short.

“I’d be lying if I said we didn’t want to win … It was tough watching Ohio State sneak away with that,” Spring said. “But they performed well.”