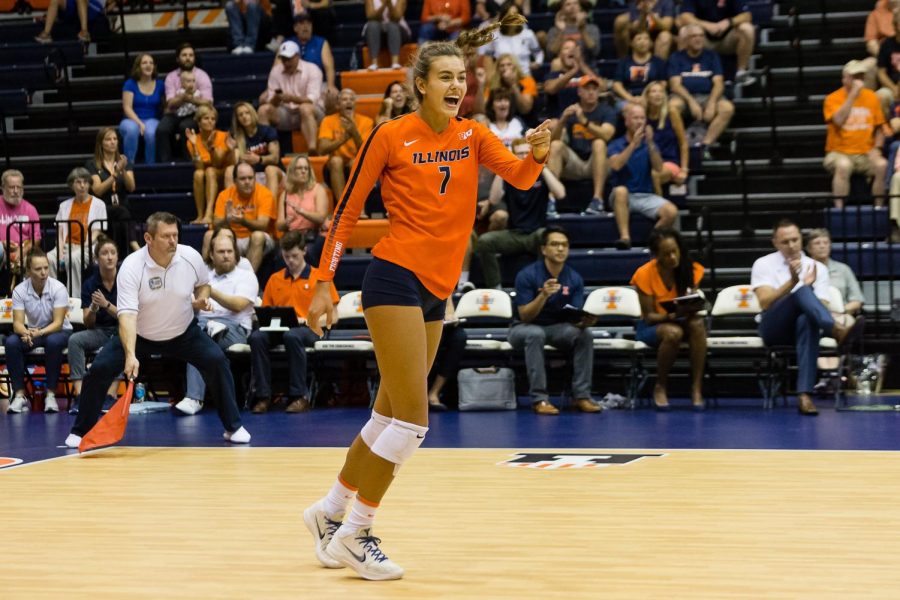 Illinois outside hitter Jacqueline Quade (7) celebrates during the match against Northern Iowa at Huff Hall on Sept. 14, 2018. The Illini won 3-0.

Jacqueline Quade is no stranger to competition.

As a junior on the Illinois volleyball team, Quade knows her way around the block as far as Big Ten and NCAA competition are concerned. But she sets herself apart, given she plays all six rotations during a match. This versatile skill set means that Quade can be found anywhere on the court, not just as an outside hitter.  She’s a quadruple threat — she can serve, set, dig and spike.

Libero Morgan O’Brien has found Quade’s presence in the back court helpful and steadying.

“I actually really like it,” O’Brien said. “We’ve gotten really used to passing next to each other, and she’s done a really good job, so it’s good to have her as an option outside.”

Quade’s stats also show the value of keeping a well-rounded player on the court at all times.

During the last match of the Illini Classic, Quade managed a team-high 21 kills against Creighton to go along with seven digs and two blocks. Overall, she finished the tournament with 49 kills, 18 digs, seven blocks, three assists and two aces. The outstanding performance was enough for Quade to be named Big Ten Volleyball Player of the Week Sept. 17.

Senior Jordyn Poulter — having earned her third-straight Setter of the Week honor — reflected on the work that has gotten her teammate where she is today.

With Big Ten competition starting up, Illinois’ schedule is about to get even more intense. And while major competition always comes with the promise of competitive matches, there’s a level of confidence expected from Quade and her teammates.

Head coach Chris Tamas credits the program’s recent success to the mental toughness his players bring to their matches.

“To play six rotations is a big deal. You have to go the whole match, there’s a lot of pressure being put on you during the match, you take a lot of jumps,” Tamas said. “So that’s a lot and to do that, to be in the passing rotation, to have that mental battle and just to be able to do it all is a big deal and she’s been doing great.”