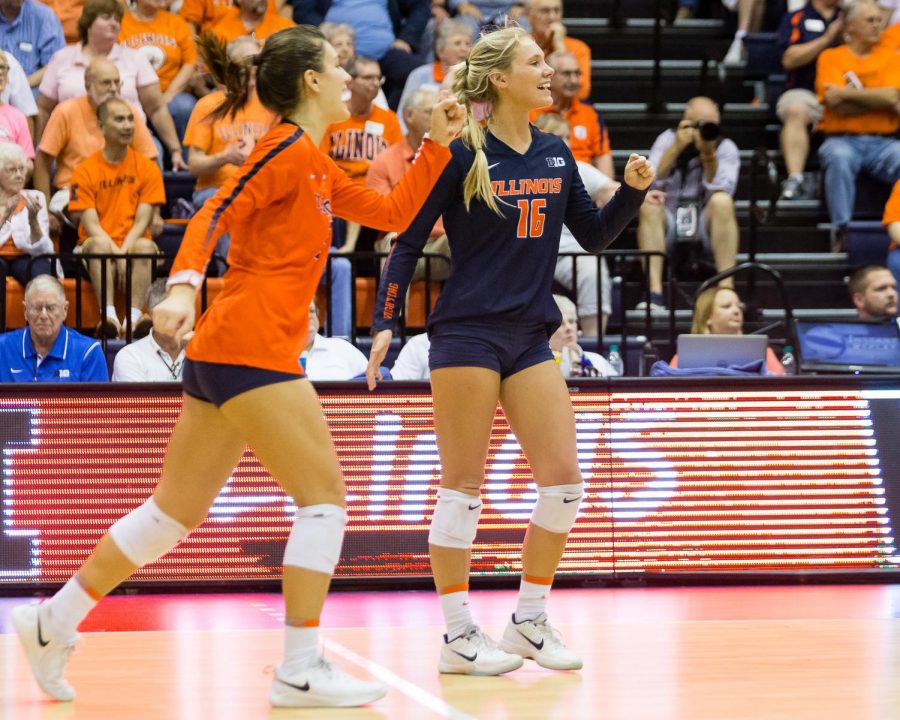 This year’s first round of the NCAA volleyball tournament is full of new experiences for the Illini.

Last year, Illinois was on the road and traveled to the University of Washington to face off against the University of Hawaii, a team well outside Illinois’ normal Big Ten competition. However, this year the Illini won’t have to hit the road during the tournament’s first round. Illinois’ No. 3-RPI ranking afforded them the privilege of hosting the first and second rounds at Huff Hall.

Despite the change of pace, head coach Chris Tamas expects his team to stick to business as usual.

“Maybe you can say there’s a target on our back or whatever, but this team’s never seen it that way,” Tamas said. “It’ll be nice being home in front of all our fans there for a pickup if we need it. But I trust this group a lot. They’ve played as a team throughout the whole year, and I think for us, it’s just about coming out and showing everyone what we can do.”

Proving they can battle against the top teams in the country has been Illinois’ goal this season, and sticking to the plan and playing as a team promises a great deal of potential payoff.

After all, Illinois’ overall record of 28-3 speaks volumes compared to their 2017 record of 21-11. And when considering Illinois didn’t even make an appearance in the NCAA tournament in 2016, the fact that the program has become one of the most prominent in Division I volleyball speaks to all the hard work put in by both the coaches and the players.

For senior middle blocker Ali Bastianelli, the outcome of the senior regular season can be described in one word: ideal.

“It’s great, it’s pretty ideal honestly,” Bastianelli said. “A top-4 seed, winning most of the Big Ten, coming in second is pretty good. It just means a lot, and this group of girls that we have on the team, they mean everything to me, and I know the other seniors feel the same way.”

Bastianelli won’t be the only one preparing for her final NCAA tournament appearance. She’ll be joined by her fellow seniors, setter Jordyn Poulter and middle blocker Blayke Hranicka, for one last tournament.

But while emotions may be running high, Illinois continues to focus on working to prepare for whatever Eastern Michigan will bring to Huff Hall Friday.

Junior Jacqueline Quade sees the team’s defense as one of Illinois’ keys to success this weekend.

“They have some smaller hitters that’ll really go for our hands in attacking, so I think just being really disciplined in our block with our eyes and everything will help us win this match,” Quade said.

With a game plan in place, all that remains to test the Illini is that first service in Huff Hall Friday night.

And while any NCAA tournament is filled with hopes and dreams, redshirt-junior Beth Prince knows that regardless of what happens, she and her teammates will know how to stay the course.

“It’s really an interesting thing because I think a lot of the times, teams get ahead of themselves and teams look for what’s next,” Prince said. “And this team, it’s not like we haven’t had goals this whole season, but I think we’ve done a really good job at doing that, and I think it starts every day in practice. We come in and it’s every single rep and every single skill that we’re working on, and I think being able to do that in practice lets us stay in the moment in those tough matches where we know that we have to perform.”