Illini softball look to succeed at another weekend tournament 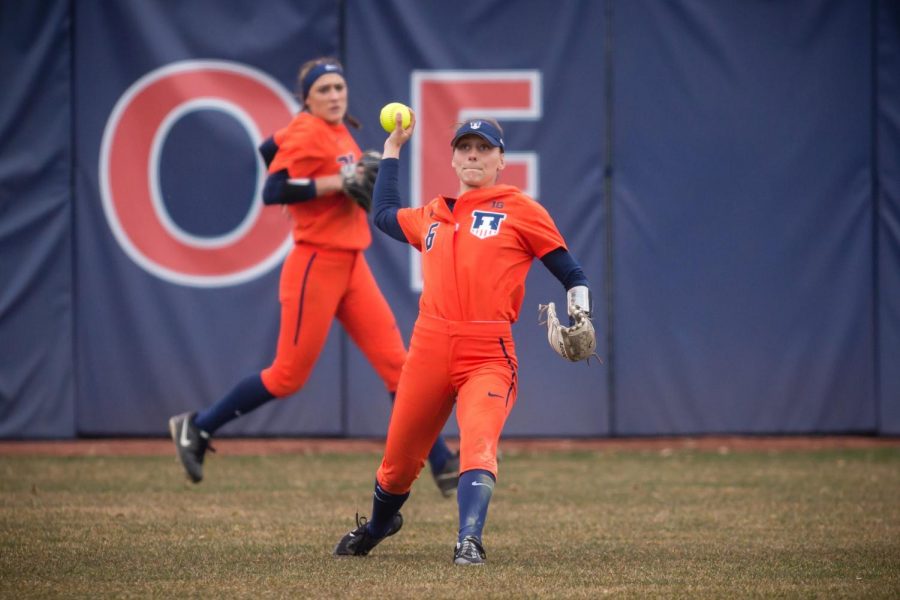 Illinois outfielder Kiana Sherlund (6) throws the ball in from center field during the game against Northwestern at Eichelberger Field on Wednesday, Mar. 28, 2018.

As temperatures are expected to climb into the low fifties back in Champaign, Illini softball can expect a brief respite from the unpredictable winter weather as the team heads down for a three-day tournament in Mobile, Alabama.

Illinois will be one of five schools represented in what will be Illinois’ third tournament of the season; also competing this weekend are Hofstra University, University of South Alabama, Nicholls State and Stephen F. Austin University.

The Illini come into the third weekend of their season with an overall record of 7-2. It is worth noting that this time last year, Illinois had a record of 3-6, having only won one game during their first tournament of the 2018 season, and only two in the second.

This weekend, Illinois will be one of three teams in Mobile bringing with them a winning record — Nicholls State will be arriving with a comparable 7-4 record to start its season, while Stephen F. Austin is at 9-3.

Head coach Tyra Perry emphasized that despite a sweep this past weekend in Atlanta, Georgia that her team knows there’s much more softball left to play.

“It’s great that we went 4-0, but we’re not even halfway into the season, not even a fourth into the season,” Perry said. “We’ve established the way that we want to play; now we have to figure out how to do that, how to play at that level consistently.”

Coach Perry isn’t the only one seeking consistency; whether at the plate or in the field, the Illini are looking for ways to lock-in their game.

Senior outfielder Kiana Sherlund sees the progression of the season as a chance for her and her teammates to start settling into their positions this season.

“This (past) weekend was something to make us get more comfortable. The first weekend out there are always some things that we need to work on, and we worked on that during practice before we played last weekend,” Sherlund said. “And I think that everyone has settled into their roles and we have gotten enough reps where we’re feeling comfortable in our positions and we’re getting reps offensively also. I think everyone is just really comfortable, but in a good way that makes us confident.”

One Illini who will likely find herself in a comfortable — or at least familiar — position this weekend is freshman pitcher Sydney Sickels. While Sickels is the youngest member of Illinois’ pitching lineup, she has already garnered a fair amount of attention for herself. The Illini rookie has already picked up four wins and two saves in her first season in the orange and blue.

But even though Sickels has gotten a great deal of individual attention, it’s the cohesiveness of the team that has made her first year at Illinois so special.

“I really like how we’re all just so close. I wasn’t expecting that; we have some fifth-years so you’re not expecting to be as close with them as the freshman are, so I think that’s really cool,” Sickels said.