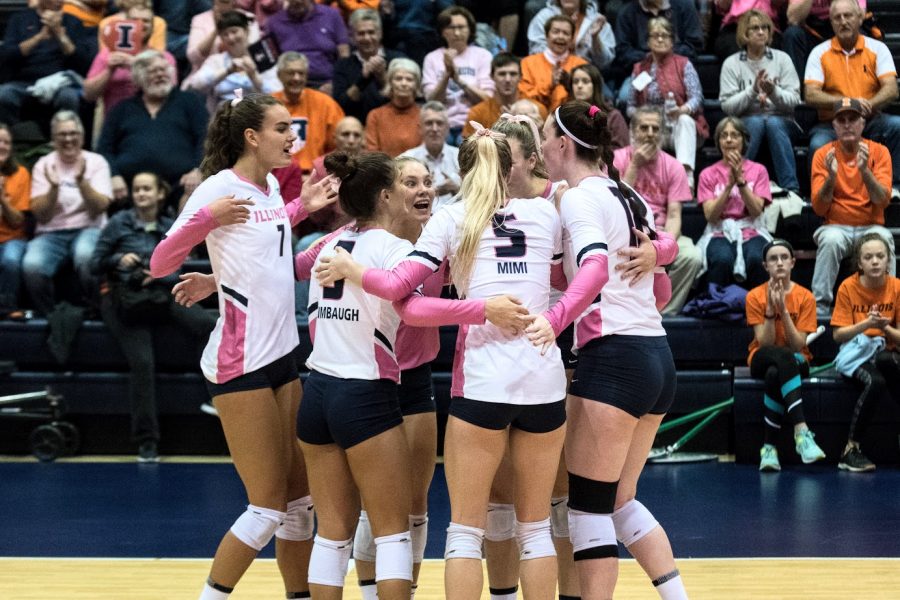 The Illini celebrate after scoring a point vs Ohio State at Huff Hall on Saturday.

Illinois volleyball continues the action at Huff Hall this weekend as the team takes on Michigan and Michigan State. The two matchups mark the midpoint of what has been a rocky Big Ten season for the 10-9 Illini, who come into the weekend with an even-split 5-5 conference record.

Illinois’ return to Huff for a matchup against Ohio State on Saturday broke a three-game losing streak in the Big Ten. The Illini suffered back-to-back-to-back road losses against the No. 6 Badgers, No. 7 Golden Gophers and No. 8 Nittany Lions, leading up to their meeting with the unranked Buckeyes.

In spite of the conference losses, which some might view as setbacks for a program that advanced to the NCAA Division I semifinals last season, senior outside hitter Jacqueline Quade is optimistic she and her teammates can compete with ranked programs like Wisconsin, Minnesota and Penn State.

“You know, it is a good learning moment because we kind of proved to ourselves we are putting ourselves in a position to compete with those teams,” Quade said. “Then it’s getting back in the gym on Monday and working on the things we can do to get those few extra points in a match to close it out instead of taking the loss against those kinds of teams.”

Illinois’ first opportunity to test the work they’ve put in at the gym is a program coming to Champaign with a similar Big Ten record — Michigan and Illinois both have five wins in the conference thus far, but neither team has walked away victorious against powerhouse programs, such as Nebraska, Minnesota and Wisconsin. At their Oct. 13 matchup in Husker territory, however, the Wolverines got swept by their host, while the Illini gave a 5-set battle back in September against the perennial conference standouts.

Comparatively, Saturday’s visitors, the 13-7 Spartans, won only one set when they played the Cornhuskers on Oct. 11, but also were swept by the Nittany Lions at home — while the Illini dropped a 5-set thriller against the Nittany Lions Oct. 23.

In the midst of Big Ten competition, varying weekly schedules and road games can become an added difficulty for recovery time or getting into the gym to brush up on skills an individual or team has struggled with in recent games. It can be especially challenging when a team has a Wednesday-Saturday schedule, as the Illini experienced last week, but this week they enjoyed a full week for recovery and practice.

Head coach Chris Tamas anticipates the weekend’s matchups to provide another window of opportunity for development and reflection — as well as a test for the program.

“Heading into the week, we know they’re good teams,” Tamas said. “Michigan had a great first half. Michigan State was close on a lot of matches, as we were, against some top-ranked opponents. So we know we’re up for a battle this weekend as well.”

The numbers are on Illinois’ side as far as a home-court battle goes. So far, the Illini have recorded only two losses at Huff Hall and four wins. Illinois will welcome Michigan on Friday and Michigan State on Saturday.