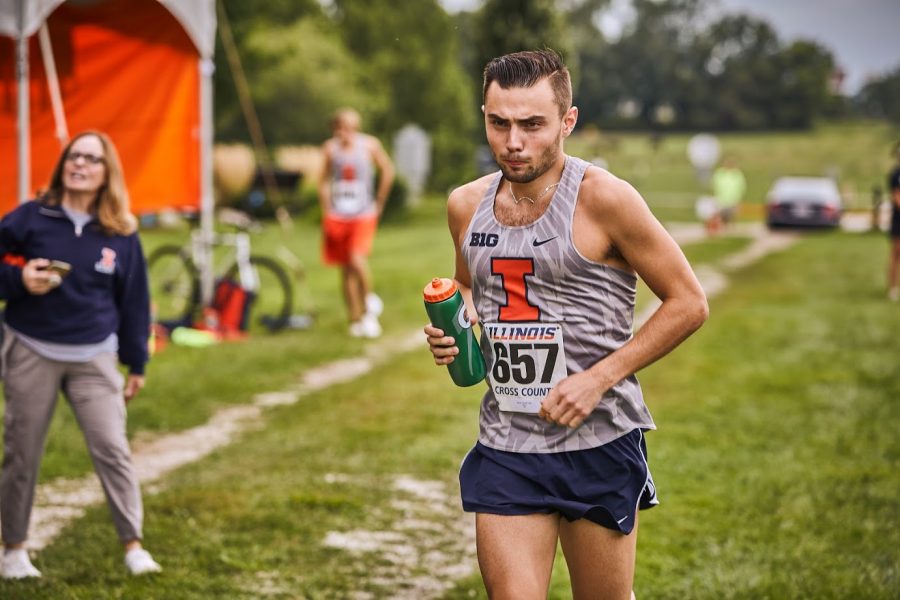 Zach Dale runs at the UI arboretum for the Illini Open on Aug. 30.

In what was one of the last cross country meets of his collegiate career, redshirt senior Zach Dale posted career-best finish at the Big Ten Championships, where he placed 24th.

After his senior year of high school from James B. Conant High School in Hoffman Estates, Illinois, Dale committed to the University of Illinois as his college of choice after only one visit to the school.

“I wanted to run for Illinois because of the guys and the whole environment,” Dale said. “The whole attitude that Illinois brings and their drive that they put themselves for their athletes is amazing.”

Head coach Sarah Haveman, who has coached Dale for the last three seasons, has said they have developed a great relationship.

“At all times when you’re a coach, you try to balance being what your athlete needs,” Haveman said. “Whether it’s day to day or month-to-month, keeping their short-term goals in mind while also long-term goals in mind is needed. The biggest proponent that Zach and I’s relationship has is making sure he’s having fun running and with the sport.”

Starting off his career with the cross country program, Dale decided to redshirt his freshman season, as it took him a while to adjust to the college training style of the program.

As he looked back at his time studying computer science and running for the school, he recognized it was a hard adjustment for him coming into the college, but over time he learned to strike a balance in being a student-athlete.

“It was really hard for me to adjust. I had some early success, and then school got really hard,” Dale said. “I think it is having a lot to do with developing those skills and to learn how to cope with stress, manage my time and learn to not put so much pressure on myself in order to perform my best. I think that is a true skill that will kind of translate over to other areas of my life.”

With one of the final playoff races of his career at the NCAA Midwest Regional competition on Friday, at Stillwater, Oklahoma, Havemen shared how she will miss Dale’s positive and consistent attitude.

“Zach has been positive even when it was easy for him to kind of slip up into a negative train of thought,” Haveman said. “He is always someone who his teammates can rely on. He’s a great upperclassman for our young kids to model their behavior over. He has had some rough spots in his career, but he kept showing up every day, remaining positive and a student of this sport.”

When discussing some words of advice he would give to younger runners beginning their running careers, Dale kept it short and sweet.

“Have fun with it, and don’t take it too seriously,” Dale said. “Trust your training, trust your coach and have faith with yourself.”