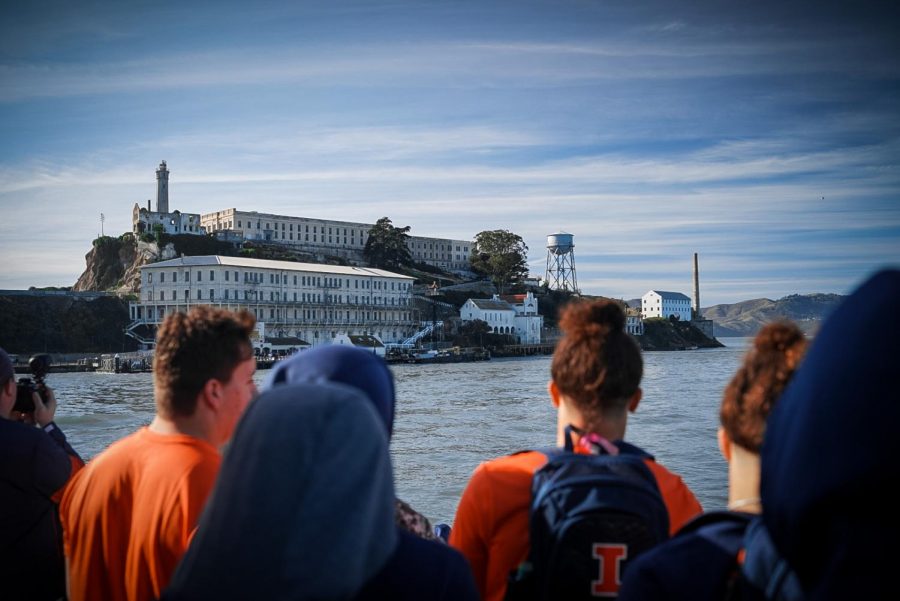 A group of Illini football players look onto Alcatraz Island before visiting the former prison facility as a team on Dec. 27. Photo courtesy of Illinois Athletics.

As part of being in the Bay Area for the Redbox Bowl, the Illinois football team took a trip to Alcatraz to learn about the history of the infamous former maximum security facility.

While the rest of the team mentioned how enjoyable the island itself was, senior linebacker Dele Harding and halfback Reggie Corbin said the journey to the island via boat was what stood out to them the most.

“I just liked the whole experience, especially the boat ride there,” Harding said. “I haven’t been on a boat that big.”

Corbin shared the same sentiment, which comes as no surprise because the two players have become the embodiment of enjoying the journey of their careers, rather than the destination itself.

Head coach Lovie Smith has preached since his arrival in 2016 that his program would be built through a process, not an overnight turnaround.

Throughout their collegiate careers, both Harding and Corbin had to scratch and claw to get to where they stand today.

Harding’s journey to becoming an every-down linebacker started off in the third phase of football, special teams, and fighting his way up the totem pole to become special teams captain by his junior year. But during his rise to being the go-t0 guy on defense, Harding suffered injuries during his first two seasons on campus, costing him seven games in the same time frame. While this path may not have been what Harding envisioned when he committed to Illinois, his resolve, support of his father and Lovie Smith helped him push on.

“I can’t say that I visioned this to come true,” Harding said. “My path that I’ve been traveling wasn’t always a clear view for me.”

“A lot of times you can get into those emotional boundaries, dealing with injuries, not playing, basically feeling like you can’t really help your brothers out there compete and win,” Harding said. “(My father’s) been my backbone, somebody I can lean on and when things are down I can just call on him and he’ll say the right things.”

“One thing I can say about coach Smith, he’s building more than just football players. He’s more so of the approach of being great overall men,” Harding said. “The road that we’ve traveled was straight adversity… we enjoy moments like (the bowl game) because we know where we came from.”

For Corbin, his freshman year in 2015 didn’t exactly go as planned. An injury led him to redshirt his inaugural season but was followed by his redshirt freshman season in which he tallied just 523 yards on 86 carries. His sophomore year didn’t go much better, as he missed the first three games of the season due to an injury and only played in eight total games, racking up 18 rushes for 78 yards. But Corbin’s continued dedication to the Illini paid off, as the stats and results reflected the hard work he’d put in.

“It’s huge man, to be able to wear Illinois and the block I on your chest,” Corbin said. “The work’s already been put in, it’s just time to lock in and get ready to play.”

”This is just a blessing, we really did it,” Harding said. “Especially just getting to this point, the road that we traveled, we never forget where we came from. Reaching this point is just a stepping stone. I’m happy for (the seniors), last year, actually going to a bowl game, everything that we hoped and dreamed for at the beginning of the season.