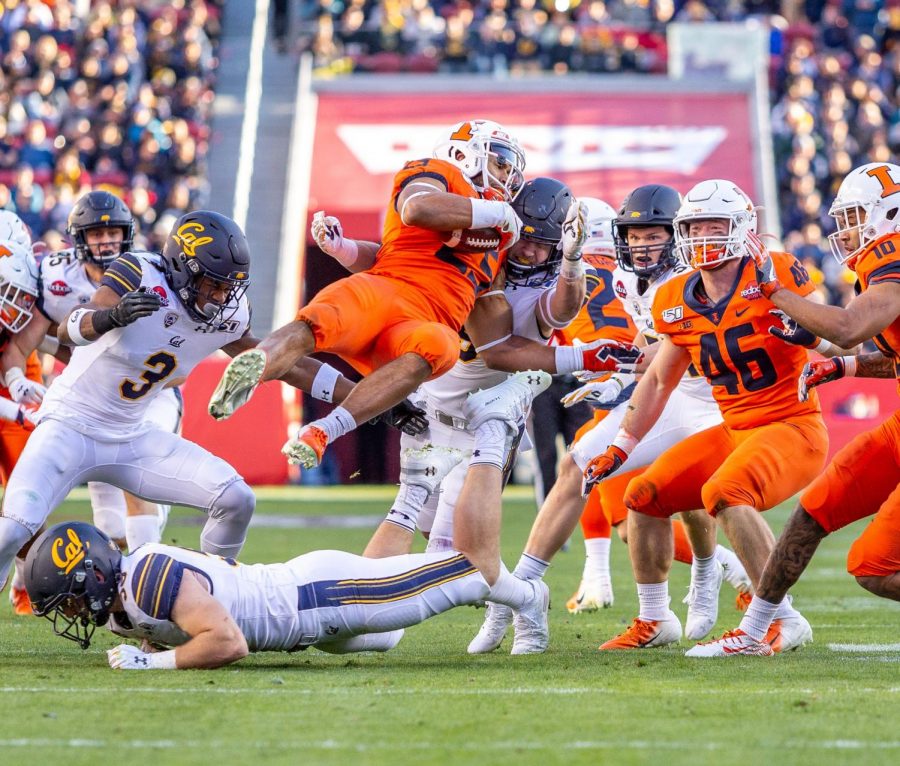 Senior runningback Dre Brown attempts to maintain possession of the ball before getting tackled during the Redbox Bowl in Santa Clara, Calif. Monday. California beat Illinois 35-20 at Levi’s Stadium, home of the San Francisco 49ers, in the Redbox Bowl. Photo taken by Jonathan Bonaguro.

The Illinois football team lost to the California Golden Bears by a score of 35-20 in the Redbox Bowl on Monday.

Monday’s game was the Illini’s first time in five years playing in a bowl game, and the Illini faithful were loud and jubilant from the start, but a lack of a consistent pass rush and takeaways prevented the Illini from pulling it out. This was the first game this season that the Illini have not gotten a takeaway.

“Today, we didn’t play well and we have to give Cal a lot of credit for that,” said head coach Lovie Smith. “We pride ourselves on taking the ball away. We can’t rely on the offense to turn it over and that was the case, we didn’t get that done.”

“We just weren’t getting to the ball and being scrappy like we usually are,” junior cornerback Nate Hobbs said. “If we would’ve scored or got at least two takeaways we would’ve changed the impact of the game. I put that on me a lot too, I should’ve made plays that I didn’t make.”

In an attempt to respond to the 79-yard touchdown drive, the Illini offense kept Peters moving with bootlegs and options to try and slow down the Cal pass rush. The majority of the drive, however, took place on the ground as offensive coordinator Rod Smith looked to get the run game going early. Williams was utilized several times throughout the drive, including catching a screen pass for a decent gain.

In the second quarter, the Illinois pass defense seemed porous, allowing 162 yards. Following an overturned call, Cal got the ball on the one-yard line and was able to quarterback sneak it in for a touchdown.

The Illini refused to give up there, as Peters launched a 40-yard pass to Barker to put Illinois in the red zone with nine seconds remaining. With a short pass to Navarro, the Illini settled for a field goal to close out the first half, cutting the Golden Bear lead to 21-13.

At the half, Cal led the Illini in total yards with 273 compared to Illinois’ 242. Peters went 9-16 for 122 yards and a touchdown, while also leading the Illini in rushing yards with 43. Barker was the receiving leader tallying 55 yards on three catches and one touchdown.

To kick off the second half, the Illini offense went three and out after Peters was sacked on third down.

The defense’s first possession wasn’t any more promising, as they let Cal drive down the field with relative ease, as Garbers was able to throw his third touchdown pass and fourth overall in the game with a two-yard touchdown pass to Gavin Reinwald.

Hobbs was called for pass interference on the drive and was continually picked on by the Cal offense throughout the game.

The offense responded with Peters scrambling outside the pocket and throwing across his body to hit senior Trenard Davis to prevent a three and out. Peters followed the pass up with a 23-yard strike to Navarro. The Illini were ready to go for it on fourth and 10, but their third delay of game penalty of the day forced Hayes to come out for a punt.

The rest of the quarter was pretty much the same, as the Illini defense failed to generate any pressure to make Garbers uncomfortable in the pocket which opened up running lanes for the Cal running game. Offensively, the Illini tallied only 103 yards compared to Cal’s 193 and had half of Cal’s first down totals.

In the final quarter of regulation, the defensive struggles continued as the Illini were called for their fourth defensive pass interference of the game early in the fourth, and to make matters worse, Eifler was ejected on a controversial targeting call, immediately followed by an six-yard touchdown catch by Cal’s Remigio to put the Golden Bears up 35-13.

The 35 points put up is a season-high in points for Cal, who came into the game ranked 115th among FBS teams in scoring offense.

About halfway through the fourth, the offense finally scored their first points of the second half off of a six-yard touchdown run by senior Reggie Corbin.

Peters then threw an interception midway through the fourth, silencing any hopes of an Illini comeback.

“Well what we want our team to do is just play at least 60 minutes,” Smith said. “Finish strong, keep fighting throughout. There’s adversity every game, you have to be able to work through that.”

The Illini continued to fight the very end, finishing the game with 450 yards compared to Cal’s 395, ending the season at 6-7.

“There’s a lot to build on, it’s a process and as we continue to take steps with our program, the bar has been set,” Smith said. “It was a lot of fun going to our first bowl game, we’re looking forward to what the future will bring.”