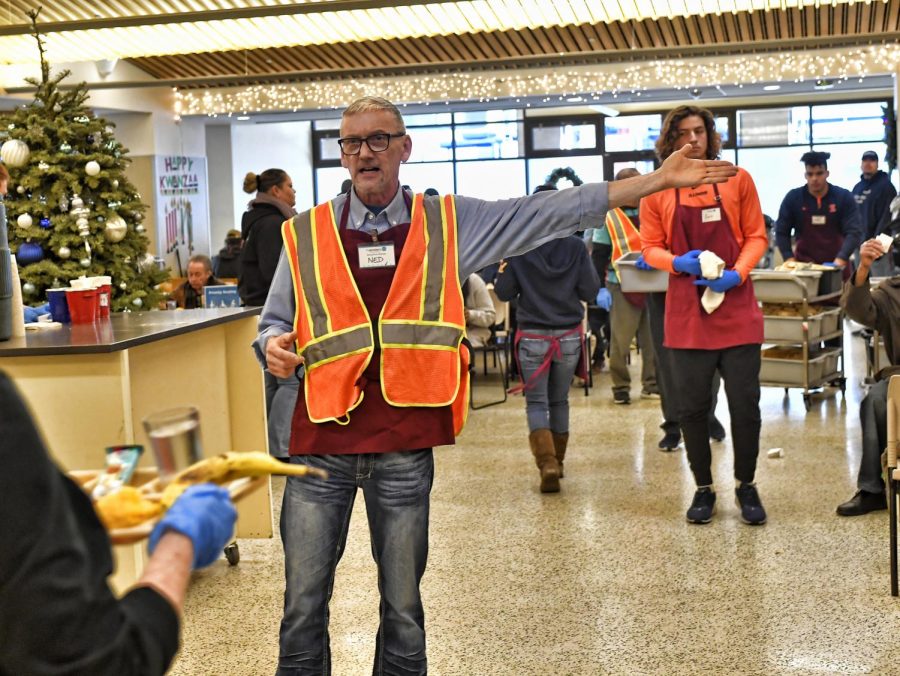 Illinois alumnus Ned Moran volunteers along side members of the Illini football team at St. Anthony’s soup kitchen in San Francisco Saturday, Dec. 28. Moran didn’t know the Illinois football team would be volunteering Saturday morning, but was surprised seeing student-athletes from his alma mater nearly 40 years after he graduated.

As Illinois alumnus Ned Moran was putting on an apron for his monthly volunteer shift at St. Anthony’s soup kitchen in San Francisco, he noticed a young man wearing an Illinois shirt across the room.

For Moran, living on the west coast prevents him from seeing many people from the University, so he jumped on the opportunity to connect with the fellow Illini.

After briefly talking to the young man, Moran realized there wasn’t just one Illini at the soup kitchen, but a whole sea of them.

Part of the Illinois football team made a trip to the soup kitchen to aid in feeding the local homeless community on the only day of the month Moran comes to volunteer.

“I did notice I think they were all freshmen,” Moran said. “I asked one of them, ‘Did they press just the freshmen to come in and do this today?’ And he kind of goes ‘Well yeah mostly.’”

Although this encounter between current and former Illini was a mere coincidence, Moran’s path to the chance meeting with the team was anything but.

With a degree in finance from the college of Liberal Arts and Sciences, Moran graduated from the University in 1982 and was recruited to work in New York City by what was then called Arthur Andersen, which used to be ranked as one of the “Big Five” accounting firms. The firm is now known as Accenture.

Moran met his partner while he was living in New York and later moved to Los Angeles with him, finding a job at TCW Investment Management Co. where he stayed for 17 years. After TCW was bought out by Societe Generale, Moran decided to move to San Francisco.

After working in San Francisco as a chief information officer for The Federal Home Loan Bank of San Francisco for two years, then finished his career running technology for the asset management division of the private equity firm KKR. Moran decided to retire in 2013 and spend more time volunteering at various places such as St. Anthony’s, Reading Partners and the botanical gardens at Golden Gate Park.

Moran attributes a major portion of his success to the LAS program at the University of Illinois.

“If I get any point across in getting a message out to struggling LAS majors, (LAS) was the best thing that could’ve ever happened in my life,” Moran said. “It provided me the base for everything that I achieved in my life.”

Although he hasn’t been back on campus since 1997, Moran still looks back on his time at the University with great fondness. From his time at WPGU to ushering at Krannert Center, Moran, as he puts it, was the type of person who flourished in college.

Moran’s love for the University inspires him to approach anyone who wears Illinois apparel.

“I literally talk to anybody I see on the street that has an Illini or Illinois shirt,” Moran said. “I can’t think of a bad interaction that’s come from it.”

Fast forward to Saturday, when he saw an Illinois football player with the block I on his shirt, Moran continued his streak of positive interactions with Illini.