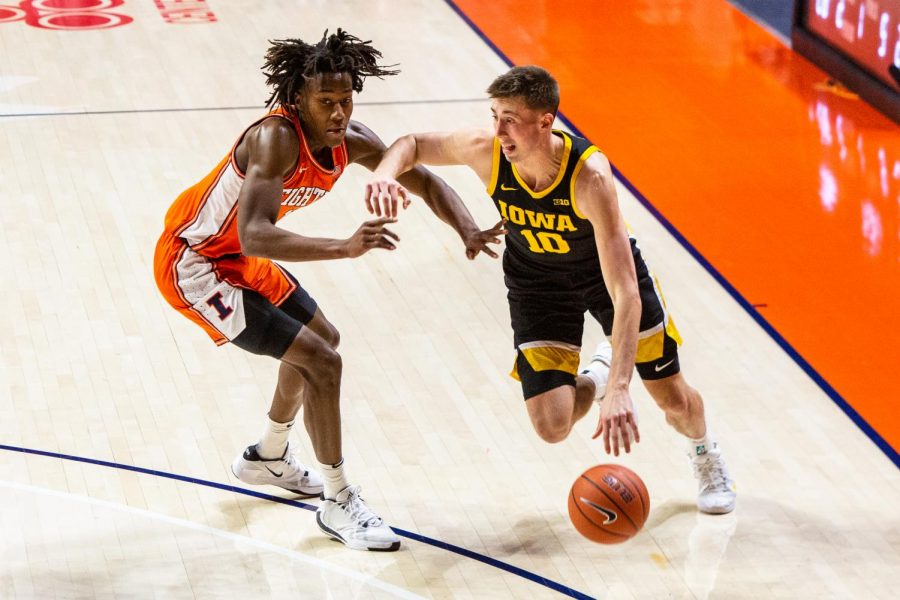 Ayo Dosunmu defends an Iowa player at State Farm Center on Jan. 29. Dosunmu recently recorded his second triple-double during the game against Minnesota on Saturday.

Ayo Dosunmu has one motto he consistently reminds himself and his teammates of: “do whatever it takes to win.”

Every night Dosunmu does that and sometimes more for the Illini, whether it’s grabbing a team-high number of rebounds, finding his teammates for open shots when he gets double teamed or taking the ball to the hoop himself. But on Saturday afternoon at Minnesota — who posed a 13-1 home record — Dosunmu didn’t miss a beat and recorded his second triple-double of the season (19 points, 10 rebounds, 10 assists) just 14 days after reaching the milestone for the first time in his career.

“I think it happens when good players play on good teams,” head coach Brad Underwood said. “You can’t go achieve a triple-double if you don’t have guys making shots and you don’t have other guys executing and you don’t have unselfishness. It’s easy to go out and score a lot of points. You usually look and you see those guys and they have no assists. That’s not the case.”

“Like I said in describing Ayo, it’s winner and it’s all caps, every letter. He’s going to do whatever it takes to win and it is very unique.”

Following his first triple-double (21 points, 12 rebounds, 12 assists) against Wisconsin, Dosunmu told reporters he had a feeling before the game he would earn the achievement, even telling his teammates to expect a triple-double.

Dosunmu didn’t call this one, it more so came with the offensive flow the Illini retained through all 40 minutes. While the Chicago native hasn’t scored under 10 points once this season and consistently reaches near-double digits in rebounds, in order to reach that 10 assist mark, Dosunmu’s teammates also have to be on.

But Dosunmu also attributed the triple-double to his coaches, who recognized the stat line with about 10 minutes left in the game and who constantly push him as hard as anyone in practice.

“I ain’t call this one. I just go out there and have fun,” Dosunmu said. “I was just in a rhythm, doing whatever it takes. My coaches get on me a lot. Y’all would be surprised. I wish there was a mic and y’all could really see how my coaches get on me so much in practice about rebounding or just making the right read.”

Dosunmu’s historic night in Minneapolis marked the 14th triple-double recorded in the NCAA this season and the National Player of the Year candidate is just the second player to have more than one this season, joining Winthrop’s Chandler Vaudrin.

With each game, Dosunmu comes closer to taking home both Big Ten Player of the Year and National Player of the Year. Iowa’s Luka Garza, who averages 24.7 ppg and 8.4 rpg, has also made a strong case for both awards.

But it’s hard to argue against Dosunmu being a more complete player and a bigger influence on his team. Dosunmu is now the only player in the country and in the last 11 years to be averaging 20-plus points, six-plus rebounds and five-plus assists.

Dosunmu also leads the Big Ten in assists, averaging 5.3 per game and is second in scoring behind Garza with 21.2 ppg. And he ranks 17th in the conference in rebounding, averaging almost as many rebounds per game (6.2) as Wisconsin’s leading rebounder — Micah Potter who averages 6.3 rpg.

While Dosunmu has remained humble, rarely accepting or giving himself praise, Underwood and Frazier never fail to do it for him.

“He’s been made that case since last year. I’ve told him that,” Frazier said. “I always believed in him. He’s an unbelievable player. I tell him every game to do what he do, ‘be a pro.’ Every game is going to be different, guys are going to be aggressive with Ayo.”

“Damn, I don’t know who’s any better,” Underwood said. “I know guys have more publicity and more marketing, but the numbers don’t lie and the productivity (doesn’t) lie and the winning doesn’t lie. I have no idea who in the hell thinks anyone is better than him right now.”