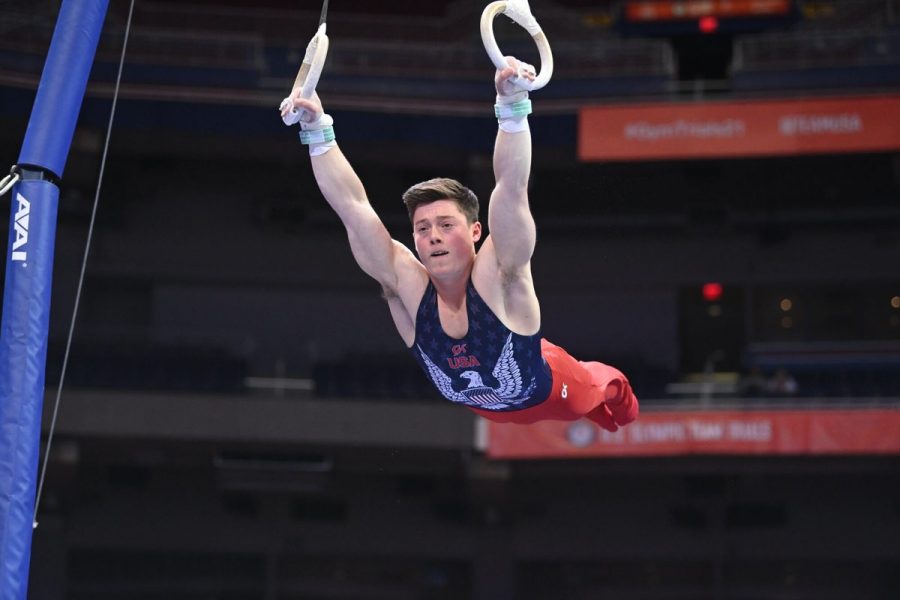 Illinois gymnastics alum warms up on still rings ahead of the U.S. Olympic Team Trials. Diab was named an alternate after missing out on a starting spot as a still rings specialist, though he will still travel to Tokyo.

Illinois gymnastics alum Alex Diab was one of 20 male gymnasts to compete in the U.S. Olympic Team Trials over the weekend, hoping to secure a spot on the U.S. Olympic team heading to Tokyo next month. Four all-arounders and one event specialist were named to the Olympic team, with the same number of gymnasts named alternates.

Ultimately, Diab was not named to the Olympic team, instead being named an alternate for event specialist Alec Yoder. Diab will train with the team over the next month and travel to Tokyo, but he will not compete unless Yoder is unable to.

Diab entered the Trials as a force on still rings, winning titles on that apparatus at both Winter Cup and the U.S. National Championships earlier this year. He once again lived up to his nickname, “The Lord of the Rings,” at the Trials by having the highest Day 1 score (14.500), the highest Day 2 score (14.900) and the highest two-day score (29.400) among still rings gymnasts.

Yoder, on the other hand, is a pommel horse specialist who spent his college days at Ohio State. He placed second at the U.S. National Championships behind Stephen Nedoroscik, but Yoder placed first at the Trials via a strong performance on his part and  an uncharacteristically weak performance from Nedoroscik. Yoder scored 15.050 on Day 1 and 14.550 on Day 2 for a two-day score of 29.600.

The specialist spot ultimately was given to Yoder by a selection committee. Committee member Brett McClure, high performance director for USA men’s gymnastics, stated that the specialist spot came down to Yoder and Diab, but it was Yoder’s starting values that won him the spot over Diab.

Nevertheless, Diab becomes the second Illinois gymnastics alum to qualify for the upcoming Olympics as a main or alternate competitor; Tyson Bull previously qualified to represent Australia on high/horizontal bar.

The Summer Olympics begin on July 23, with artistic gymnastics competition scheduled to begin the next day.