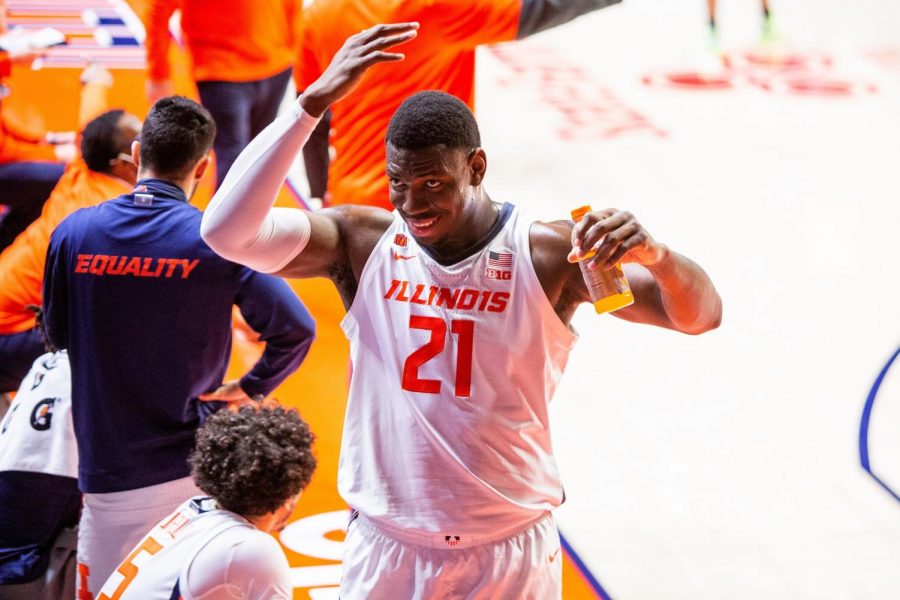 The Illinois men’s basketball team held their media day on Friday, as they look ahead to the beginning of the 2021-2022 campaign. After losing to Loyola Chicago in last year’s NCAA tournament, the team morale seems to be high going into this year’s training camp.

The Illini have had some of their biggest contributors from last season come back for another year, including super seniors Trent Frazier and Da’Monte Williams and junior Kofi Cockburn. The seven-foot big man averaged 17.7 points per game and 9.5 rebounds, establishing himself as one of the premier centers in not only the Big Ten, but throughout the country.

But, one of the big holes in Cockburn’s game was stretching the floor with a mid-range jumper. To help out this problem, Illinois hopped into the transfer portal and picked up Florida’s Omar Payne.

Cockburn is excited about Payne coming into the squad, and so far their play against each other in training camp has been competitive. Cockburn hopes that Payne can help Illinois reach new heights this year.

“Omar is a really good player,” Cockburn said. “He helps me a lot. I never really knew what kind of player he was until now, and so far this year I’ve found out he’s great.”

Despite averaging only 3.8 points per game and 3.2 assists with the Florida Gators last season, Payne will likely be a big contributor for the Illini this year. Head coach Brad Underwood has been pleased with the Florida native’s progression so far within the program and is hoping for big things from Payne this season.

“(Payne’s) a guy who has been off the charts,” Underwood said. “If I could give one guy an A+ from the start to where he is now, in improvement and development, it’s Omar. His conditioning has become great, he’s spent a ton of time running and he’s gotten stronger.”

When transferring to a new school, it can be tough for a player to immediately mesh with their new teammates. However, it didn’t take long for Payne to recognize the potential he and Cockburn have in this Illinois front court.

“I mean we definitely complement each other in the high-low,” Payne said. “To be honest, I don’t really see anyone that can guard Kofi like that. I feel like I’m a pretty good passer, I could fit in, and vise-versa. And defensively, I don’t see anyone coming in the paint.”

Along with Payne, Illinois has brought in another notable transfer to the team in shooting guard Alfonso Plummer from Utah. Plummer and Payne will certainly help Illinois stretch the floor and improve on their shooting from last season’s campaign. Cockburn is excited about these new additions to the squad, and both players seem to be buying into Brad Underwood’s system so far.

“They’re good listeners, and they’re really quick learners,” Cockburn said. “The new guys are grasping the concepts really well. And us as leaders, we need to help them with that, but they’re doing pretty well.”

Fans will get to see both Cockburn and Payne in action when Illinois opens its season on Nov. 9 at State Farm Center against Jackson State.