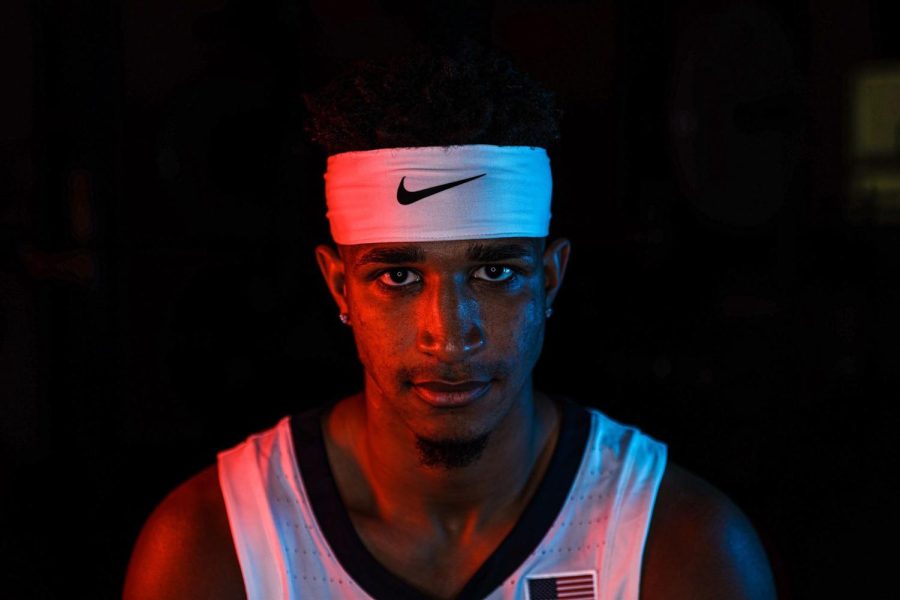 Alfonso Plummer, one of the incoming transfers, brings a dangerous threat from three, something the Illini desperately need.

Illinois’ infamous loss to Loyola last season left a bad taste in everyone’s mouth. The Illini struggled throughout, and as head coach Brad Underwood put it at media day on Friday, “They simply outplayed us.”

The Illini struggled, particularly from the 3-point line that day. In that final game, the Illini shot 4-14 from deep, 29%. That’s where senior Alfonso Plummer comes in.

“He’s one of the best shooters I’ve coached, period,” Underwood said. “He’s always in the gym, he’s always working on his game, and I love that about him.”

Plummer, who committed to Illinois after entering the transfer portal this offseason, has already built a reputation as a deadly shooter. He played two years at Utah and once set a Pac-12 tournament and single-game record by hitting 11 threes in a game. For the season, he averaged nearly 14 points per game and connected on 38% of his threes.

The Puerto Rico native and former junior college star has loads of confidence. Much of it likely stems from his father, Renan Plummer, who played professional basketball with Panama’s Olympic team. But he’s also been emboldened by his new coaches and teammates.

“Since day one, they showed me love,” Plummer said. “The chemistry was really good. Curbelo is like a brother; he’s always by my side. This team is special. I know we can do really big thing  because we’ve connected already.”

Although he has been with the team for less than a year, he is far from an outsider. There was no question who his roommate would be, as Trent Frazier chose him, Plummer says. It seems like a natural pairing between the two lefties known for getting hot from deep.

They could be an exciting duo, but on paper, playing them at the same time poses questions. Neither is known for distributing the ball at a high level, and both stand under 6-foot-3. But this may not hold them back.

“Trent is for sure one of the best defenders I’ve played against,” Plummer said. “He’s very energetic, always talking. He’s just a great teammate. He don’t care about scoring; he just cares about winning, and if he thinks I’m hot, he’s gonna give me the ball for sure.”

The whole team is on the same page when it comes to Plummer’s role: He’s going to be shooting. In fact, Plummer says Underwood has given him the “green light” to shoot whenever and from wherever.

The Illini even added a new wrinkle into their practices: a four-point line. This is all part of Underwood’s plan to take and make more threes this season.

It won’t be all on Plummer to produce from three either. In addition to Frazier, the Illini can count on seniors Da’Monte Williams and Jacob Grandison, who have both shot 35% from three over their careers.

Sophomore Coleman Hawkins and senior Austin Hutcherson are other potential threats from deep. Hutcherson connected on 41% of his threes in two years at Wesleyan, but he sat out the last two seasons, one due to transfer rules and the next due to injury.

Although Underwood has yet to announce his starting lineup, it won’t change much for Plummer when he does. His role is already defined, and he seems to be adjusting to the change of scenery well.

“The Pac-12 is more like a systematic conference, but this conference is pace,” Plummer said. “Everybody runs; everybody is athletic. It’s way better for me because I’m a shooter, and I have to find shots. I have to be moving constantly on the court.”

Plummer adds shooting that the Illini desperately needed over the past two years. Other than Frazier, all of the Illini’s major offensive weapons have done most of their work inside the paint or right outside it.

Kofi Cockburn, Giorgi Bezhanishvili, Andre Curbelo and even Ayo Dosunmu all are inside scorers. In hindsight, it’s somewhat surprising the Illini had the success they did with so few reliable deep threats, but if Plummer can fill that role, he could be the team’s x-factor.

“You make 11 three’s in a game at the highest level, you’ve got some ability,” Underwood said, “He’s gonna be a fun guy for me to coach.”