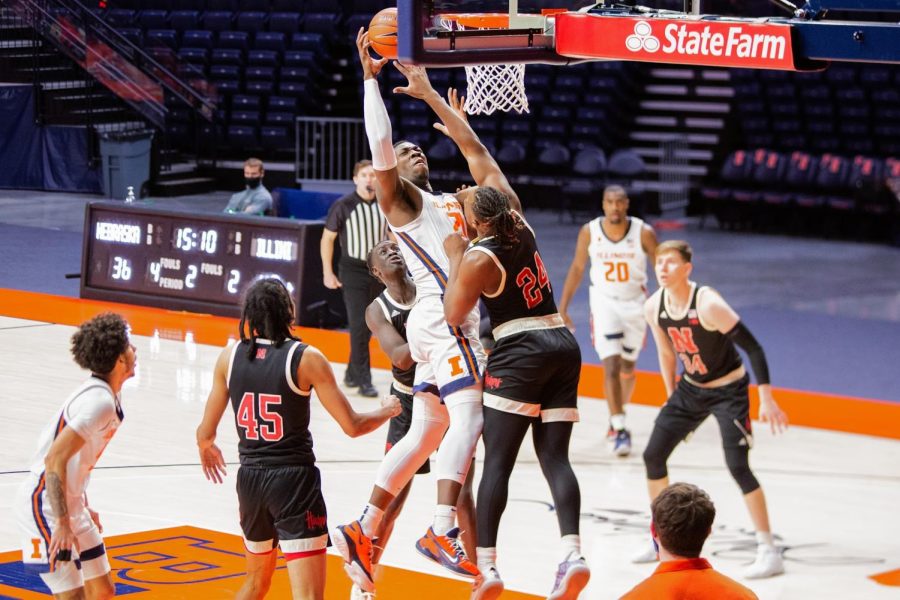 Junior Kofi Cockburn tries to dunk a basket against Nebraska Feb. 25. Kofi Cockburn wants to make his mark on Illinois as he prepares for this upcoming season.

Only 33 jerseys currently hang in the rafters at State Farm Center. With a narrow set of requirements needed to earn the right to be recognized and honored amongst Illinois legends, the group is exclusive.

Ayo Dosunmu’s No. 11 jersey will soon join the group, and after earning unanimous Second-Team All-American honors last season, Kofi Cockburn’s No. 21 will be added after he finishes his career in Champaign.

But, until then, the seven-foot center looks to continue building upon his already impressive legacy at Illinois.

“I want to be the best player to leave Illinois basketball,” Cockburn said. “I wanna win as much games as I can. I just wanna do what I love, you know? I love playing in front of these people; they’re really wonderful.”

But, it didn’t always seem like Cockburn would don the orange and blue of Illinois for his junior season. On April 18, the Jamaica native took to Twitter to announce his decision to enter his name into the NBA Draft, something he also chose to do following his freshman season.

Choosing to return to college for a third season, Cockburn entered the transfer portal, and after listing his three options as Illinois, Florida State and Kentucky, the Illini star ultimately decided to come back to Champaign for a third season.

This season, Cockburn won’t have Dosunmu in town to feed him the ball in the paint, but sophomore Andre Curbelo looks to have that role secured after dominating as a freshman last year.

With Dosunmu fulfilling his dreams in the NBA and playing for his hometown Chicago Bulls, Cockburn has emerged as one of the leaders on the team.

“I’ve been here for two years now,” Cockburn said. “I’ve listened; I’ve learned a lot. It’s just up to me now to guide these guys; the freshmen, the new guys, guide them, get them on the right path, you know, showing them what our culture is, getting them to know that every single day we come out, we compete, we work hard, we get better.”

“It’s just about being vocal, and it’s, like, leading and being the shoulder somebody can lean on.”

Cockburn took big strides in his sophomore season, averaging 17.7 points and 9.5 rebounds while starting all 31 games. Although he earned First-Team All-Big Ten and Second-Team All-American honors, to become the “best player to leave Illinois,” he still has a few things he needs to work on.

“I just need to work on my overall game,” Cockburn said. “Just keep dominating, and dominate some more. Leading my guys, winning more games. Those are the most important things right now: just being consistent, winning games and just keep developing.”

Cockburn enters this season with lofty expectations, and he will likely head into his junior campaign as a preseason All-American and one of the favorites to win Big Ten Player of the Year.

Although he fondly remembers the highs of winning the Big Ten tournament and earning a 1-seed in the NCAA tournament, Cockburn still has a bitter taste in his mouth after the Illini were upset by Loyola Chicago in the second round.

“After Loyola, every game’s a circle. It doesn’t matter who you are, I’m coming out to the arena and gonna try to beat you,” Cockburn said. “We’re gonna try and dominate you, no matter what jersey you have on.”

As players, coaches and fans alike count down the days until the Illini open their regular-season schedule against Jackson State on Nov. 9, Cockburn continues to express his happiness with his decision to remain in Champaign.

“I love playing for these coaches; they’ve gotten me so much better,” Cockburn said. “And my teammates, man. I can never forget any one of them, man. They’re just like the best, you know? I wanna come, and I wanna do it for them. I wanna do it for myself, obviously, but it’s all about them at the end of the day.”