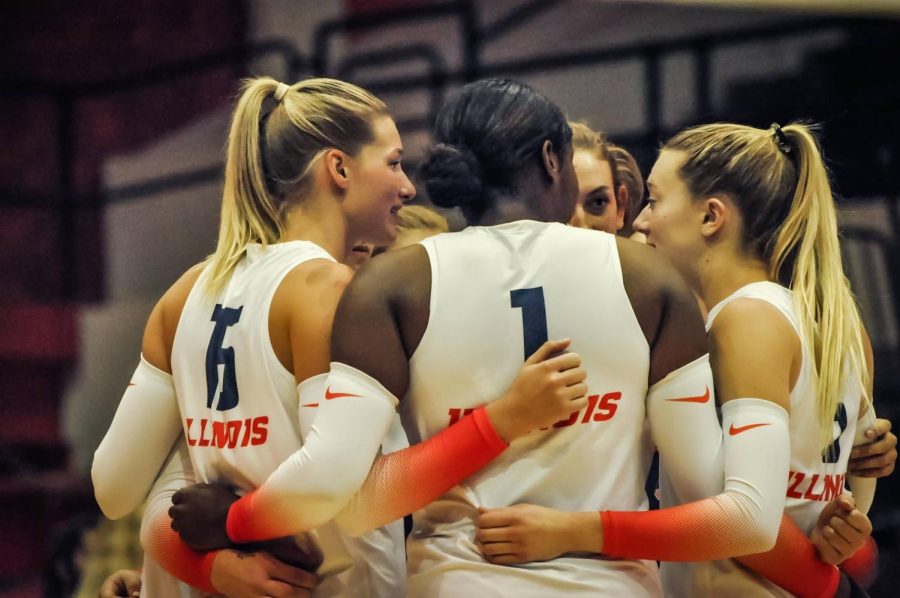 Illinois huddles during the match against Northwestern on Sept. 25 at Huff Hall. The Illini fell to the Wisconsin Badgers, 3-1, in Madison on Saturday night.

After both teams traded points in the early portion of the first set, Wisconsin went on a 6-0 to take a 13-8 lead. The Badgers seemed to be in cruise control as the set went on, leading 21-15 with Dana Rettke, Grace Loberg and Jade Demps the guiding forces for the Badgers.

But, the Illini weren’t going down without a fight, something head coach Chris Tamas has emphasized all season, and they clawed their way back via a late 7-1 run to tie the set at 22 apiece.

With the Badgers serving for set point on two different occasions, Illinois was able to battle back, using two attack errors and a Megan Cooney ace to seal the first frame for the Illini, 27-25, the second time in less than a week that Illinois had taken the first set from Wisconsin.

Wisconsin opened the second set with a quick 12-5 lead, though Illinois went on another 7-1 to reduce the deficit to a single point. But, the Badgers bashed the hopes off another Illinois by going on a 4-0 run to win the set, 25-20, and tie the match at 1-1. Despite the Illini losing the set, Raina Terry recorded seven kills in the frame.

The third set was all Wisconsin. After the set was tied at 4-4, the Badgers went on a 15-4 run, which included four kills each from Devyn Robinson and Loberg. After a Terry kill, Wisconsin closed the frame on a 6-0 run to win, 25-9, and take a 2-1 lead heading into the fourth set.

Like the second and third sets, Wisconsin opened the frame with a bang, getting out to a quick 5-2 lead following three kills from Rettke. Though the Illini were able to hang with the Badgers for the early portion of the set, a 7-1 Wisconsin run opened up a nine-point deficit for Illinois, and it could never recover.

Despite fighting off two set points, a kill from Robinson, her 10th of the evening, sealed the 3-1 win for the Badgers, their fifth straight win and their second win over the Illini in the last week.

Terry led Illinois with a double-double with 13 kills and 11 digs, while Jessica Nunge added 10 kills and Cooney notched four kills, her fewest of the season, and 10 digs.

Illinois returns to action on Wednesday night against Iowa at Huff Hall.