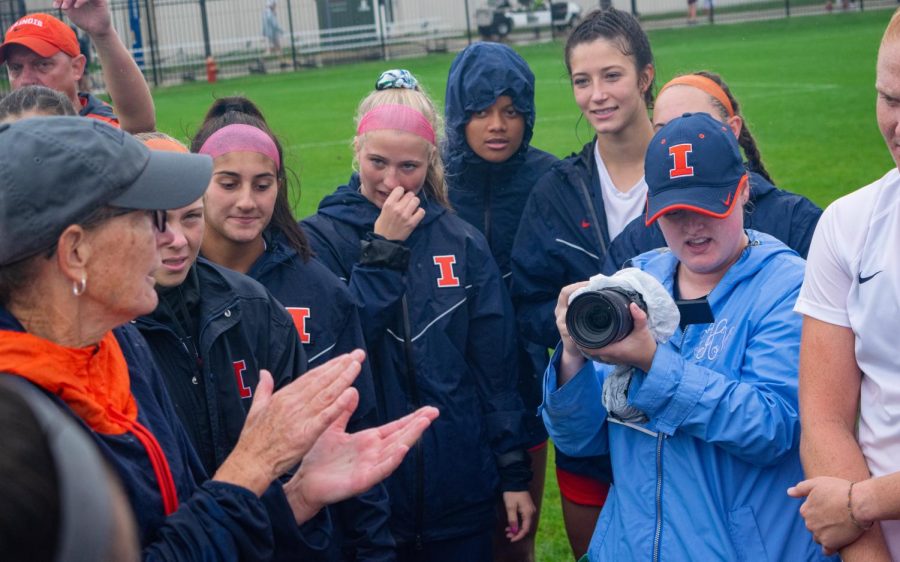 Illinois soccer head coach Janet Rayfield speaks to her team during the game against Maryland Oct. 3. The team looks past their recent losses in hopes of performing better during their last two games of the season.

It’s been a rough season for Illinois soccer in the Big Ten. The team currently stands 1-6-1 in conference and has come just short in several matches. With two games left in the regular season, the Illini aren’t ready to give up just yet.

“They all know that there’s something to play for and that they’re going to fight to the end of the season as well,” said head coach Janet Rayfield.

Illinois finishes its season with two home games against Nebraska and Rutgers.

Nebraska sits just one spot ahead of Illinois in the Big Ten standings at 12th, and Illinois is right behind at 13th.

The Cornhuskers and Illini will be squaring off to earn their second Big Ten win of the season.

Nebraska’s last two matchups ended with a loss and win. Against Iowa, Nebraska was up by three goals near the end of the first half but couldn’t sustain the lead.

The Hawkeyes made the comeback and scored four unanswered goals to get the 4-3 win. On Sunday, the Cornhuskers finally got its first conference win against the Wisconsin Badgers.

Eleanor Dale scored the game-winning goal in the 82nd minute with a looping header past Jordyn Bloomer.

On the other hand, Illinois went 0-2 on the weekend against Minnesota and Iowa, but the team is putting the games in the past and looking ahead to this weekend.

“The plan is to go out and compete in this, that’s what players came here to do,” Rayfield said. “We’re going to compete to have the best game that we can have and play the best we can possibly play.”

Illinois will be looking to be consistent all-around in order to get a good result.

Goalkeeping wise, Rayfield said both Julia Cili and Naomi Jackson could get some minutes on the field against Nebraska and Rutgers.

Defensively, communication will need to be better. Converted center back Eileen Murphy and freshman Angie Galo stepped into a big role midseason.

Offensively, consistency is key. Although it is the end of the season, Illinois still has the chance to continue its performance against Iowa into Nebraska and Rutgers.

The chances and shots created are there, but the last piece of the puzzle, shooting, is missing.

Rayfield said the team has to have the belief in order to overcome the hesitation and doubt to have a good game.

Kickoff will begin at 7 p.m. central time and can be streamed on Big Ten Network +.