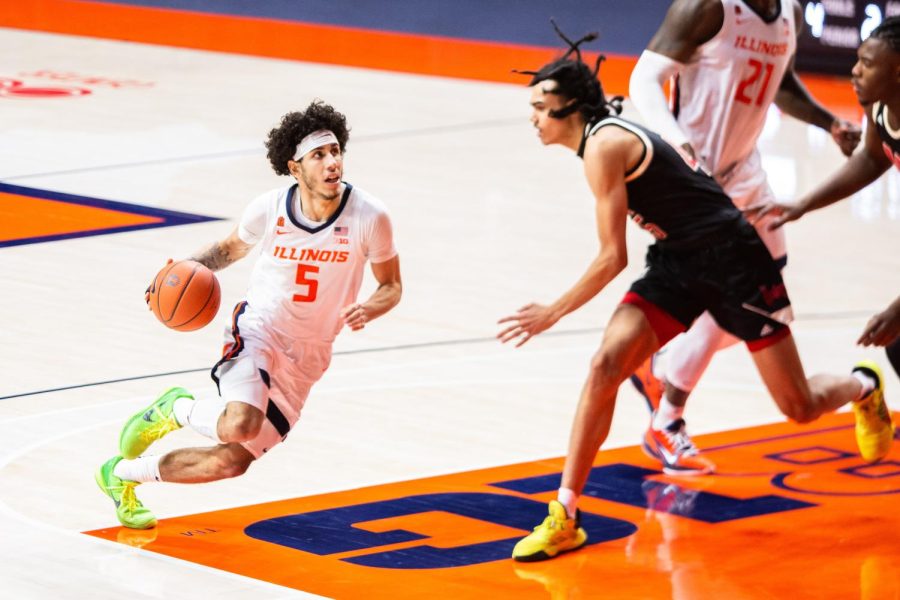 Andre Curbelo dribbles toward the basket during the game against Nebraska Feb. 25. There are three crucial questions that the Illinois basketball team has yet to answer as they go into their first preseason game on Saturday.

The Illini basketball team open their 2021-2022 season this Saturday in an exhibition against the St. Francis Fighting Saints. Following an offseason ripe with change, there are several questions yet to be answered that can only be answered on the court.

Has Curbelo improved his jump shot?

As a freshman last year, Andre Curbelo proved himself to be a leader and floor general on the court. His passing vision, speed and quick hands on defense made him a nightmare to deal with on both ends. For his efforts, Curbelo was named Big Ten Sixth Man of the Year and received a spot on the Big Ten all-freshman team.

Things will be different this year. A large part of Curbelo’s success last year came playing against opponent’s second units. Now, in the starting lineup, there will be more eyes on Curbelo than ever before. Opponents will most likely attempt to take advantage of his biggest weakness: shooting.

Curbelo struggled to hit shots from the 3-point line early last season and later stopped shooting them altogether. He made just five 3-pointers last year, one being a last-second heave after bobbling the ball.

I expect teams to start going under screens when Curbelo has the ball, cutting off his driving lane and forcing him to at least think about shooting from deep.

Last year, when Illinois got the pick-and-roll going, teams doubled the ball and forced players not named Curbelo or Ayo Dosunmu to create shots. With the addition of Utah transfer Alfonso Plummer, the return of Coleman Hawkins and Austin Hutcherson from injury, and the addition of three freshmen known for shooting, the Illini feature more shot creators than they’ve had in all of Brad Underwood’s tenure as coach.

As a result, teams will probably try to keep the ball in Curbelo’s hands, as he is the Illini’s only non-shooting guard. Regardless of his shooting, Curbelo will impact the game. But, if he can shoot 30% from three, compared to 16% last year, even if he only takes open ones, the Illini offense might be better than last year.

Giorgi Bezhanishvili is no longer with the Illini. Over the summer, he surprised many fans by declaring for the NBA draft, and many more were surprised when he signed a contract with the Denver Nuggets. Now, junior Kofi Cockburn remains the only experienced big on the roster.

The Illini are far from lacking options at either big position. Excluding Cockburn, the Illini are returning four big men who have spent little to no time on the court so far. Of the four returning big men, Coleman Hawkins, Benjamin Bosmans-Verdonk, Brandon Lieb and Conner Serven, all are sophomores, and none averaged more than seven minutes a game last year.

Highly-touted transfer junior Omar Payne adds even more depth. Payne is the most likely option to share minutes with Cockburn this season, but he also hasn’t played much. In two years at Florida, Payne averaged 15 minutes a game and recorded just under four points and four rebounds per game.

Payne brings more experience than the returning big men, but he is a questionable fit next to Cockburn. Payne has talked about expanding his game and becoming more of a shooter this year, but he shot just 57% from the free-throw line last year. That’s 10 percentage points fewer than Cockburn, who I’ve never seen take a shot outside the paint. Despite this, Underwood has said he plans on playing the two non-shooting big men at the same time.

Despite their lack of experience, Hawkins and Lieb might be better options at the four spot. Both have shown shooting potential and could provide floor spacing, allowing Cockburn more room to work inside without sacrificing size and rebounding.

It is also possible that Underwood returns to his previous strategy. Last season, seniors Da’Monte Williams and Jacob Grandison logged heavy minutes at the four, as the Illini ran smaller lineups predicated on defensive versatility. Both spaced the floor with reliable shooting, but the loss of Adam Miller has opened up minutes at the small forward position, both Williams’ and Grandison’s natural position. The addition of another small guard in Plummer may lead Underwood to compensate with bigger players at the four. Only time will tell.

Will freshman play? Who has gained Underwood’s trust?

Since Brad Underwood took over the head coaching job in 2017, he has consistently played freshman. However, in the past, he hasn’t had much of a choice. In his first year, the freshman class, which included Trent Frazier and Williams, were the first players he recruited, and they were joining a bad team.

The next year, Underwood picked up Dosunmu and Bezhanishvili. The year after that was Cockburn’s freshman year, and last year Curbelo and Adam Miller made their college debuts. It’s a testament to Underwood’s recruiting ability. All these players would have started at most schools around the country.

The freshman this year are no slouches, but they weren’t high ranked prospects like those Underwood has recruited in past years. Ramses “RJ” Melendez was the Illini’s highest ranked prospect coming in at 93rd in the nation. In comparison Dosunmu, Cockburn, Curbelo and Miller were ranked 32nd, 46th, 47th and 33rd, respectively.

Melendez, Luke Goode and Brandin Podziemski are joining one of the deepest, most experienced teams in the nation. Certainly the most experienced team in recent Illini history. Who gets to see playing time this year will likely depend on fit and the ability to earn Underwood’s trust.

All three are expected to provide shooting when on the floor, but Podziemski may face the biggest hurdles to earning playing time, as the Illini are stacked at the guard positions.

Curbelo was just named to the Bob Cousy Award watch list, Frazier has averaged 30 minutes a game since his freshman year, and Plummer was the featured scorer last season at Utah. Then there’s Hutcherson, who has had two years to learn Underwood’s system while he’s sat out.

With their size, Melendez and Goode have better odds of seeing the court consistently. Goode is my pick, and he impressed at the Illini’s open practice last week, when he showed off his impressive range as a shooter.

At 6-foot-7-inches with room to grow, Goode could be the perfect stretch four to pair next to Cockburn. Like Da’Monte Williams, Goode does not fit perfectly at any one position. This could play in his favor, as he could realistically see time anywhere from the two to the four spots.

Which freshman plays on a given night may simply depend on matchups. Fortunately, the Illini won’t have to depend on freshmen to produce in order to win.