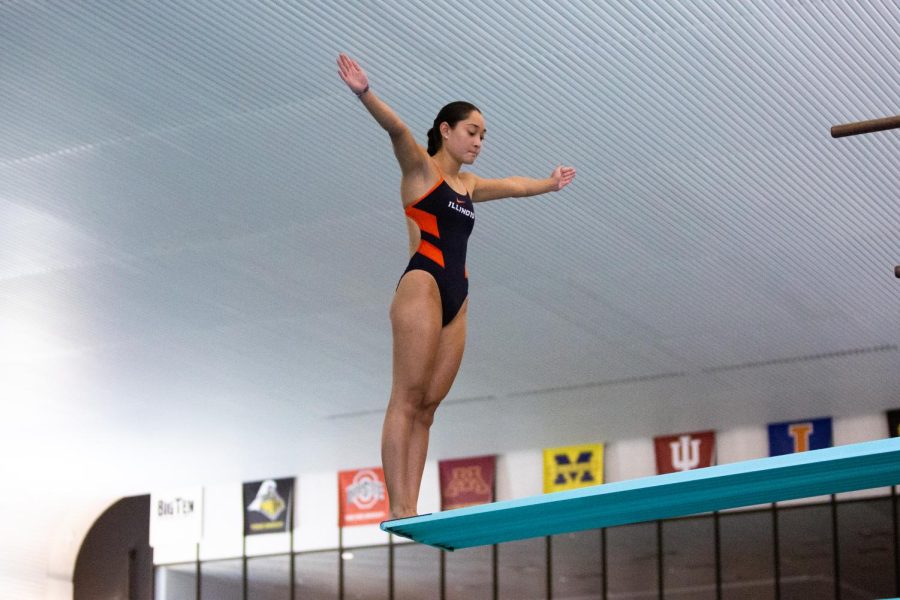 Illini diver Regina Meirmanova balances at the edge of a diving board during the Orange and Blue meet a the ARC Oct. 9. The Illinois swim & dive team will travel north to Evanston on Saturday in hopes of continuing their early-season momentum.

After a strong season opener with a win over Indiana State, the Illini will look to use their momentum against the University of Illinois at Chicago Flames and the Northwestern University Wildcats in a tri-meet in Evanston, Illinois.

The Flames, whose season opener is this upcoming meet, will be looking for their first win of the 2021-2022 season. The Flames finished last season 2-2 and placed second in the Horizon League.

The Wildcats, who lost their first meet to Indiana University on Oct. 16, 175-125, look for their first win of the season and first win in the Big Ten.

This meet also starts off the team’s in-state competition. In the next two weeks, the Illini will take on four of the five other Illinois-based Division-I women’s swim & dive teams. A strong start to the season and this stretch of meets is definitely on the Illini’s radar.

“Northwestern is a really strong team,” said head coach Sue Novitsky. “They have many talented athletes, so does UIC. (A win) would definitely reinforce all the work that they’ve been putting in both in the pool and in the weight room.”

For the Illini, an early win in the Big Ten is sure to help raise their motivation and confidence for the rest of the season, but it won’t come easy. Last year, the Wildcats went 4-2 in the regular season and finished fourth in the Big Ten championship.

“I want them to see them step up and compete in each and every competition we have, knowing that they put out the best effort that the team can on that given day,” Novitsky said. “The only way we’re going to keep improving: by testing ourselves against tough opponents and tough competitors.”

Illinois divers also showed potential against Indiana State, as four Illini divers had personal bests: junior Erin Young and sophomores Allison Landis, Brooke Michael and Taylor Michael. The early signs of improvement show the team’s potential and the room for growth, which will be crucial to the Illini’s success this weekend and for the rest of the season.

The meet is scheduled for 11 a.m. at Northwestern’s Norris Aquatic Center.