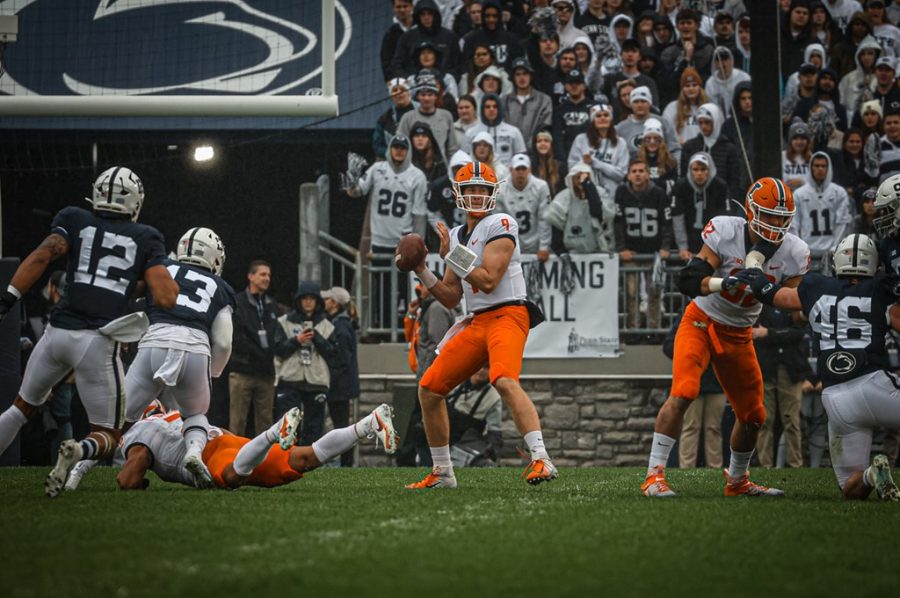 Quarterback Artur Sitkowski begins to throw the ball during the game against Penn State Saturday. Quarterback Brandon Peters is likely to replace Sitkowski after his season-ending injury.

Just as the Illini hit their season’s apex with an upset win over No. 7 Penn State this past weekend, they received some unfortunate news. Quarterback Artur Sitkowski broke his arm in the victory, knocking him out for the remainder of the season. Sitkowski appeared in five games this season, including three starts.

At this point, there’s little doubt that head coach Bret Bielema will have to turn to quarterback Brandon Peters to lead the offense. Peters was at one point the undisputed QB1 of the team, believe it or not. Since that moment heading into game one, things have gotten complicated. Let’s take a second to explain exactly how we got here.

Heading into Illinois’ fateful week one matchup against Nebraska, Peters was the established starter. He’d been the QB1 for the Illini for two seasons and had seen mixed results. In 2020, Peters went 39-for-80 yielding three touchdowns and 429 passing yards across five games, which isn’t exactly a stat line that jumps off the screen.

Peters had started relatively strong in the Nebraska game, going 3/4 for 35 yards, but he took an untimely sack on his second series that knocked him out of the game with a shoulder injury.

Sitkowski commanded the Illini offense with poise, going 12/15 for 124 yards and two touchdowns en route to a 30-22 win. The sophomore transfer from Rutgers was a starter as a true freshman, but he had a rough season in which he had just four touchdowns to 18 interceptions in 11 starts.

He took a backup role in Piscataway before transferring to Illinois to be the backup in Champaign. Just minutes into his first game as an Illini, Sitkowski was under center, and initially, it seemed as if he might not look back. Then, Illinois lost its next two games to UTSA and Virginia. Sitkowski put up less than stellar numbers, and Peters was promptly inserted back into the starting lineup once fully healed.

But, just like Sitkowski, Peters’ next few performances weren’t inspiring, either. In his first game back, Peters went 10/26 in a 20-17 loss to Maryland. It got ugly enough that in the fourth quarter, Sitkowski was seen warming up on the sideline.

Alas, Bielema stuck with Peters as the starter for the next few weeks despite publicly remaining cryptic about the situation. Against Wisconsin, however, Peters was having a rough go before coming down with another injury, forcing Sitkowski into the game. Sitkowski didn’t do any better, going 0/12 on his first 12 passes and ending 8/27 in what became a shutout 24-0 loss.

Heading into this past weekend, the quarterback situation remained as murky as ever. Bielema said Peters would need to be cleared early in the week if he was going to start so he could fully prepare. Peters was then cleared to practice on Tuesday but still did not get almost any practice reps, according to Bielema. He was on the bench when Illinois started its matchup against Penn State.

The game was grueling, with Illinois focusing on its ground game and almost only turning to pass plays on third-and-long situations. After sitting on the bench for hours, Peters was called into the game after Sitkowski broke his arm in the fourth overtime.

The situation was about as high leverage as they come. Illinois was in overtime against the No. 7 team in the country. Peters was very publicly involved in a quarterback controversy in which both fans and his own coach were unsure of his ability to play winning football. And, on top of everything, if Illinois was going to win that football game, it would almost certainly have to come from Peters because he was walking into the middle of a two-point conversion shootout.

With all of that pressure packed into that singular moment, Peters came into the huddle in the fifth overtime and missed his first pass. It would’ve been easy to write off that first miss as rust he needed to shake off, but in the next overtime, he missed another pass.

At this point, Penn State and Illinois were both collectively failing at scoring a single two-point conversion on a national stage, so the Illini went a different direction on their next attempt. They gave the ball to Josh McCray to try to run it in and take them to the promised land. That failed, too.

Both teams were clearly exhausted to an absurd degree. Illinois had sustained injuries to a variety of key players, including both its QB1 and RB1, and was trying absolutely anything it could to get the football in the end zone. Finally, in a college football record eighth overtime, Peters connected with Isaiah Williams to score.

But Penn State didn’t make it easy from there. Despite failing to convert in the previous five overtimes, running back Noah Cain found the end zone and sent the game to a ninth overtime, meaning Peters would have to make another play in order to win the game.

The Illini defense clamped up and got Peters and the Illinois offense the ball back with the chance to win the game if they converted. In possibly the most important completion of his life, Peters linked up with Casey Washington in the end zone to complete the upset.

Just days later, it looks like the quarterback controversy between Peters and Sitkowski is over by default. Peters will likely have the keys to the Illini offense moving forward, and there is a pretty lengthy list of reasons for pessimism. But, in the face of it all, Peters showed this past weekend that he’s not afraid of pressure or making mistakes. He might miss some (or a lot) of passes, but now we know that regardless of the prior results, he won’t be afraid to take risks to try to win some games.

Ultimately, Illinois has proven to be a team mostly focused on its ground game with inconsistent quarterback play all season regardless of the starter. If Peters can find a way to turn that around, just like he did this past weekend, the Illini just might have a chance to turn around their losing season.