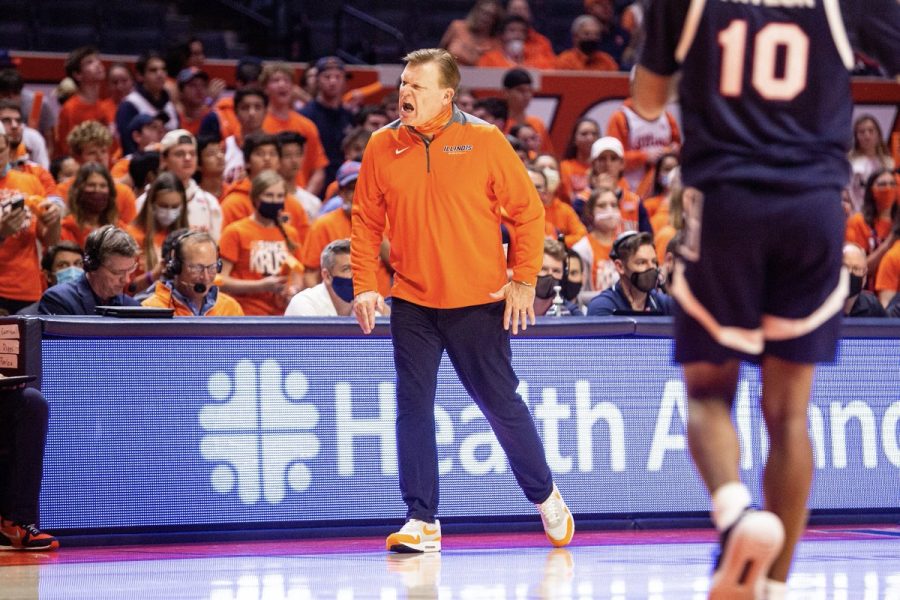 Illinois head coach Brad Underwood yells at his bench during the team’s game against Jackson State on Nov. 9. The Illini were out of sorts on offense all night, ultimately falling on the road to Marquette, 67-66.

What a disaster. Despite leading for nearly the entire second half, the Illini were unable to score a field goal in the final five and a half minutes of the game and fell to Marquette, 67-66.

Kofi Cockburn was once again out, serving the final game of his three-game suspension. And, his absence was clearly felt. Illinois struggled in the paint all game and without the big man there, the Illini couldn’t set up their outside game the way they wanted to.

But, the biggest issue was turnovers, led by Andre Curbelo. The Illini turned the ball over 26 times Monday night, seven of them coming from Curbelo. The point guard also missed several key shots down the stretch, almost all of which he shouldn’t have even shot in the first place.

Trent Frazier led all scorers with 23 points, but even he turned the ball over with 30 seconds to go, ultimately leading to a Golden Eagle comeback victory.

I just said it, but this refers to the number of times Illinois turned the ball over. And, they did it in every possible way, too.

Intercepted passes. Shot clock violations. Sloppy handles. You name it, the Illini probably did it on Monday night. The three freshmen were barely seen on the floor against Marquette, so there were a ton of veterans out there. But, 26 turnovers is not often seen from a veteran team.

Head coach Brad Underwood looked to be losing his mind over the turnovers from the sideline, but ultimately it’ll be his job to clean that up before more tough non-conference competition comes up.

That was easily Curbelo’s worst game as an Illini. He is supposed to be one of the best point guards in the conference, if not the country, but that was all but put on display on Monday evening.

He finished the game with 11 points but on 4/18 shooting and with seven turnovers. He tried to do everything himself the last five minutes, but unfortunately he couldn’t do anything productive.

Even on the final possession, after several awful trips down the floor in a row, he tried to make the game-winning play, but he turned the ball over to end the game. A very fitting ending for a game Illinois didn’t deserve to win.

That stunk. Without Kofi, the Illini got into very little rhythm and looked extremely lost a lot of the time. Frazier had an awesome game up until the final couple minutes, but that wasn’t nearly enough as the Illini were held to under 70 points.

The bench only scored two points in total on one bucket from Alfonso Plummer. Da’Monte Williams, Benjamin Bosmans-Verdonk and Luke Goode (only one minute of playing time) were each held scoreless.

The Illini are lucky to be getting Cockburn back from here on out, because what we witnessed Monday at the end of the game was ugly. The turnovers were awful, and no one came up clutch at the end of the game. You could argue Williams was the best player down the stretch because of hustle plays and rebounds, but he didn’t even score. Yuck.

This was fine. I didn’t love the way Darryl Morsell and Justin Lewis were able to score for Marquette, but overall I wasn’t mad about the way Illinois defended. They did foul a little too much, but lots of those were questionable, especially some late calls on Coleman Hawkins.

It was almost a miracle that the Illini weren’t down by double digits at halftime and only lost by one, and I credit that to the defense. Frazier, Williams and Omar Payne are all really solid defenders, and that showed.

Underwood coaches defense really well, and they’ll have to keep this up to get back on track and compete for a conference title.

The turnovers were awful, but I’m not sure how much you can blame that on Underwood. Some people will wonder why the Illini didn’t use a timeout on their last possession, but I think it’s because they had the ball off a missed free throw and already went over the plan.

I can’t imagine Brad was encouraging Curbelo to keep on putting up terrible shots or calling for him to try and dribble between three or four guys. I don’t think Underwood did anything great on Monday, but we gotta cut him a little slack.

His best player is still out, and it’s really hard to run your best offense without your star. He’ll get him back from here on out, and then we’ll truly be able to assess this team.