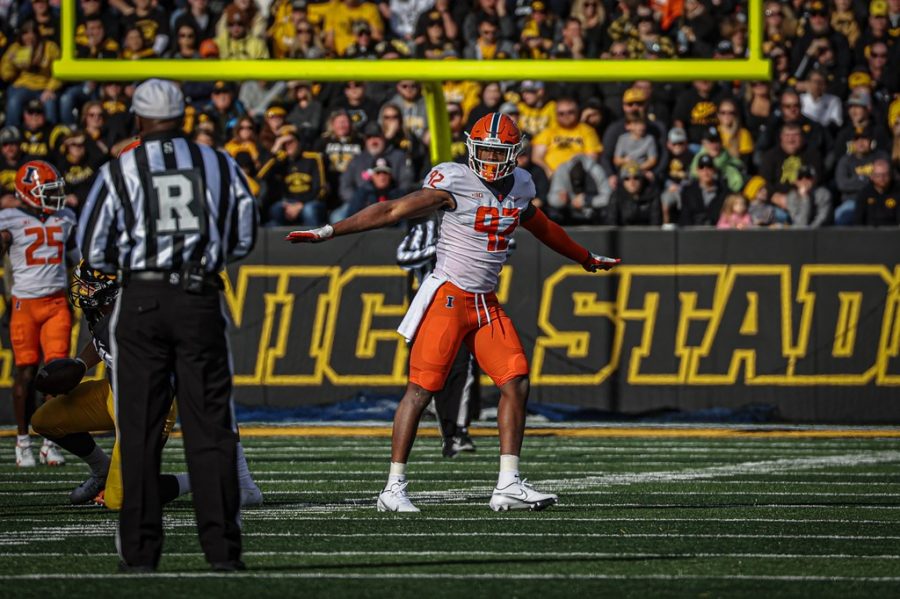 Isaiah Gay celebrates during the Illinois football game against No. 17 Iowa on Saturday at Kinnick Stadium. Isaiah Gay was a big factor on the defensive line in the 33-23 loss.

After 11 weeks of football, reality is finally setting in. The Illini have had moments where they’ve looked like a formidable team knocking on the door of respectability, but they have just as many where it seemed a fly could knock them over. This weekend’s loss to Iowa serves as a perfect microcosm of this up-and-down season.

There were times where Illinois looked unstoppable, like when they went up 10-0 early in the first quarter, but just as quickly came points where the Illini looked like they didn’t belong on the same field as the Hawkeyes, like the Iowa kickoff return touchdown immediately following Illinois’ second score. Head coach Bret Bielema has said it all season: This team struggles to put together four quarters of sound football.

That doesn’t mean the Illini haven’t drastically improved from game one. The defense has not-so-quietly become a force to be reckoned with, and the Illini have now scored first-quarter touchdowns in consecutive games after not doing so all season. It’s easy to get lost in the taste of the huge upset road victories Illinois reeled off against Penn State and Minnesota, but the reason they’re called upsets is because they aren’t supposed to happen at all.

This Illini team massively overachieved to even get into position to qualify for a bowl game had they won against Iowa and Northwestern, and they should be commended for making it this far. As much as it might sting to know the football season likely ends for Illinois next week, the loss to Iowa was widely predicted and shouldn’t be held against this team. The game was a lot closer than the final score might suggest, so let’s break down what I liked and didn’t like about how Illinois ended up here.

Brandon Peters is about as consistent as the fall weather in Champaign (not consistent). But on the first drive of the game, it looked like the vaunted Brandon Peters revenge tour might finally be kicking into high gear. He spearheaded the Illini offense, going 6/7 for 68 yards and a touchdown against what was expected to be an impossibly stout Iowa defense.

Things pretty much exclusively went downhill from there, but on that first drive, Peters showed more of what we already knew: Deep down somewhere in his nonchalant demeanor is a viable starting quarterback. He did have a couple other big plays on the day, such as his back-to-back 20-yard passes to Donny Navarro Jr. and Isaiah Williams or his 44-yard bomb Casey Washington, but Peters couldn’t find the end zone again until the game was all but over.

Peters has one game left to end his collegiate career the right way, so we’ll have to see if putting his best foot forward includes playing well for four quarters. There’s no doubt he has the capability, only if he can execute on it. Peters’ performance was far from ideal, and I’ll break down the disappointing side of it later on.

The largest inflection point of this game was probably Iowa’s kickoff return touchdown midway through the first quarter. Without it, this game gets a lot closer, and Illinois doesn’t have to focus on playing catch-up for three quarters. Regardless, that score was on the special teams, and in spite of it all, the defense came up with clutch stop after clutch stop in the fourth quarter.

When the Hawkeyes got the ball in the fourth quarter on the Illinois-17 yard line thanks to a pair of 15-yard penalties, the defense kept them out of the end zone, forcing Iowa to settle for a field goal to go up 23-16 and keep the game within a score.

When the Illinois offense stalled yet again and Iowa got the ball back, Kerby Joseph, the team’s resident ball hawk, came up with a timely interception to put the Illini at roughly midfield with a chance to tie the game if they were to score.

Iowa may have ended up with 33 points, but the underlying numbers make the number a lot easier to swallow. Seven of those points came from the kickoff return touchdown and seven more came from a Brandon Peters pick-six.

Illinois actually had more total offensive yards than the Hawkeyes, with those two major plays accounting for most of the scoring deficit. The second largest factor in the scoring deficit was penalties and time of possession, two categories in which the Illini lost handily.

Gay logged a career-high 10 tackles on Saturday, including a crucial sack on third down early in the fourth quarter to force an Iowa punt when the Illini were still in striking distance. The Iowa offensive line held up well all day, so Gay’s tackle in crunch time had the chance to be momentum-shifting on a lot of levels. The offense couldn’t take advantage, but that doesn’t erase that Gay was a standout on the defensive end in a key game for the Illini.

Peters looked overmatched for most of the game aside from his first drive. After Iowa went up in the second quarter, Illinois was essentially forced to play catch-up for the rest of the game, which meant leaning on Peters. Unfortunately, Peters has consistently struggled when he’s leaned on as the primary generator of offense, and Saturday was no different.

Peters threw two interceptions on the day. One came late in the second quarter and set up the Hawkeyes for a long field-goal attempt, which they missed. The second one came during Illinois’ final push to get back into the game, so it’s a bit more excusable.

The most egregious moment of Peters’ day might have been his missed pass to a wide-open Carlos Sandy that would have gone for at least 20 yards when the Illini were down seven midway through the fourth quarter. Had he connected, the Illini would have been well within Iowa territory with the chance to make some noise.

Illinois has lost games because of penalties before, and they were once again an ingredient on Saturday. The Illini had 10 penalties for 96 yards, which is simply unacceptable. There’s not much to be said, but if Illinois can’t stay disciplined, it won’t be able to hang with the better teams. Hopefully this gets better when Bielema returns to the sideline.

Things got ugly in the trenches

The best indicator for Illinois’ success this season has been its ability to generate offense on the ground. This week, the rushing attack was abysmal, with the Illini only garnering a measly 64 ground yards compared to Iowa’s 172. It led to the Hawkeyes winning the time of possession battle handily, 34:01 to 25:42. We’ve seen in previous weeks that the Illini defense is at its most vulnerable when it doesn’t get time to rest. This week proved no different.

Illinois has shown the ability to get the ground game going against talented run defenses in previous weeks, but Chase Brown and Josh McCray just did not have it this time. They’ve proven to be talented pieces that could help the Illini win games in the future, but they’ll need to work on consistency.

This Iowa loss was sobering for the Illini, but that doesn’t mean this season should be viewed as a failure as it winds down. Illinois had a tough schedule and a quarterback situation that evolved seemingly by the minute for much of the season. Despite the challenges, the Illini got better across the board throughout the season, and it culminated in some notable upsets. At the end of the day, this season was about Bielema establishing himself as a competent coach capable of directing winning football. He’s more than done that, and the rewards will be reaped in the form of easier recruiting.

Next week’s matchup against Northwestern won’t have much on the line, but this Illinois team has shown it doesn’t quit. With so many seniors on the roster playing in the final game of their collegiate careers, there’s no doubt the Illini will try to end this season the right way.