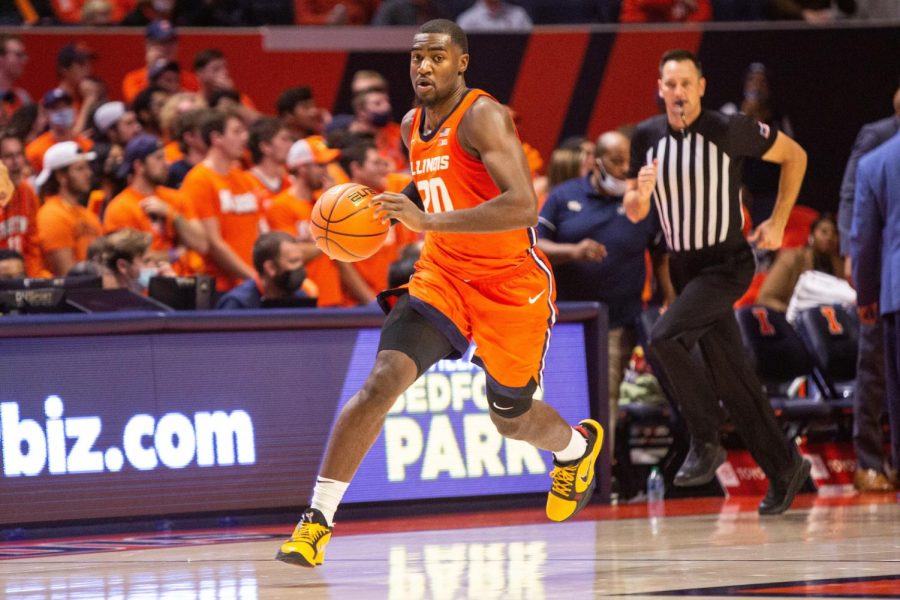 Da’Monte Williams drives with the ball during Illinois men’s basketball’s game against Jackson State on Nov. 9. The Illini fell, 71-51, to the Cincinnati Bearcats in Kansas City on Monday night.

Kofi Cockburn scored 18 points as the Illini were blown out by the Cincinnati Bearcats, 71-51, in the first game of the Hall of Fame Classic on Monday night.

Illinois ran the offense through Cockburn early, and he scored on three of his first five touches. The offense seemed to be humming when Andre Curbelo hit his first three of the season on a pullup near the end of the shot clock.

The Illini started the game on a 19-4 run led by Cockburn, who scored 12 points in the first eight minutes of regulation.

Over the next five minutes, Cincinnati went on a 13-5 run, spurred by guards Jeremiah Davenport and Mike Saunders Jr. and a defensive adjustment made by Cincinnati head coach Wes Miller.

The Bearcats started double-teaming and triple-teaming Cockburn, making it nearly impossible to pass him the ball in the post. This completely stalled the Illini offense.

Andre Curbelo was able to get the ball to Cockburn a few times but not without getting it stolen a few times in the process.

With nearly six minutes to go in the first half, the Illini lost their lead, and they trailed at halftime, 34-31.

The Bearcats started the second half with a full court press, immediately causing an Illini turnover. The Illini continued to struggle shooting in the second half, especially from three, as they made only three of 22 3-pointers all night.

Cincinnati’s defense was superb, but its offense was mediocre at best, just good enough to get past the struggling Illini. The Bearcats recorded eight steals and held Illinois to just 28% shooting from the field while shooting 41% from the field themselves.

With 13:39 to go in the second half, Austin Hutcherson checked in for the first in his Illinois career. He would be fouled several times and ended his first appearance with five points on 5/6 from the free-throw line.

In the first 10 minutes of the second half, the Illini shot 1/11 and turned the ball over several times. Their 14th and final turnover came with 10:27 left in the game as Cincinnati forced a five-second violation on Curbelo, who was inbounding.

With a little over nine minutes left in the game, Cincinnati’s Davenport hit a 3-pointer from nearly 30 feet out to give the Bearcats a 56-36 lead over the Illini.

Trent Frazier went scoreless for the first time this season after leading the team in scoring the past three games.

The Illini ended the game on a streak of 18 missed three pointers.