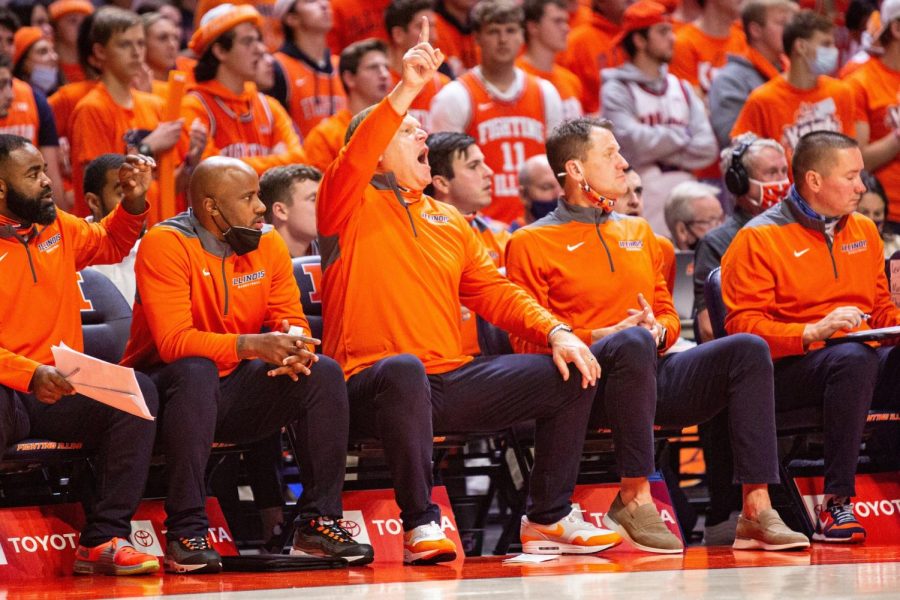 Brad Underwood and the Illinois coaching staff sits on the bench during Illinois’ game against Jackson State on Nov. 9. The Illini coaching staff failed to make adjustments during the team’s loss on Monday.

In Kofi Cockburn’s first game back, Illinois came out looking like the Flyin’ Illini back in 1989.

That didn’t last long. After the Illini took an early 23-8 lead over the Bearcats, Cincinnati found a way to take a three-point lead at halftime and ultimately crush Illinois, winning 71-51.

Illinois looked sloppy, out of rhythm and just simply couldn’t get it going on offense during the last 30 minutes of play.

Things did turn around a day later, though.

They didn’t look great, but the Illini were able to learn from some mistakes and defeat Kansas State Tuesday night, 72-64. Illinois led the Wildcats by three at half, and despite an injury to Trent Frazier and playing very odd lineups late in the game, held off K-State and earned the victory.

On Monday, Illinois was led by Cockburn with 18 points and Andre Curbelo with 12, and on Tuesday, Cockburn again led the way with 23, followed by Alfonso Plummer with 21.

When Curbelo was at his best, Illinois found chemistry on offense, both on Monday and Tuesday nights. He was dishing out assists and getting to the rim early against Cincinnati, but he struggled the rest of the game, as did the Illini.

Against the Wildcats, he was great early, slumped a little bit and then had a very solid second half when he was in. I credit the Illini for holding their own when he was out late in the game, but typically, as Curbelo played well, so did Illinois.

And, honestly, that’s what we should expect from Illinois from the beginning of the year. Curbelo is expected to be one of the best facilitators in the country this season, and until Illinois can figure out some other rhythm, Curbelo has to be prepared to entirely lead the offense — up until Kofi gets the ball inside — so Illinois can score some points.

Offensively, defensively and leadership wise, Ayo Dosunmu’s presence has been missed so far. Even I didn’t expect it to be felt this much, but the Illini could really use their pro-level talent right about now.

They struggled to get anything going against Cincinnati, had trouble defending good guards in both games and Brad Underwood expressed the lack of leadership within the team at the moment. Unsurprisingly, Ayo would help tremendously with all of those things.

But the reality is that Dosunmu is gone and having a very solid rookie season so far as a Chicago Bull. The players and staff are going to have to find a way to fill his void on offense, defense and in the locker room, or else they won’t find themselves competing for a second consecutive Big Ten championship.

I think Illinois adjusted very nicely on zero days rest after an extremely disappointing performance against a Cincinnati team that isn’t supposed to be any good. Other than Cockburn and Curbelo early, Illinois looked dead. No chemistry. Inexperienced.

But Tuesday was different.

Even when they faced adversity with Cockburn in foul trouble and Frazier leaving with an injury, the Illini found a way to put up 72 points against a Bruce Weber-coached team, who, as Illinois knows from when he coached the Illini, is a very good defensive coach.

Humongous shoutout to Plummer, who shot 7/9 from three and came up with 21 huge points against the Wildcats. And to Cockburn, who continues his dominance inside. When Cockburn touches the ball on nearly every possession and Curbelo can help open the floor for shooters like Plummer to get open, Illinois will be able to score points this season.

Neither defensive performance was very bad, but they didn’t look like a top defensive team in either game, in my opinion. I don’t think either of these offenses are very good, but maybe I’m not giving Illinois enough credit.

Against the Bearcats, two guards scored well against the Illini: Saunders scoring 20 and Davenport scoring 19. Neither of those players were defended even close to as well as they should have. The lack of offense against Cincinnati obviously led to more Bearcat points, and the whole game just seemed like a disaster.

Against Kansas State, two guards in Nowell and Pack scored 19 and 15, respectively, and forward Massoud had 13. I think Illinois could have done a better job on the guards, as it seemed like in the first half the Wildcats were scoring layups at will.

But Frazier went out, and at the end of the game, the Illini held their own on the defensive side of the ball for sure. I liked the adjustments they made from the first half to prevent the layups, which I give credit to both the staff and the guards for.

Cincinnati was awful. No adjustments were made on offense, the defense didn’t improve and everyone looked lost, and ultimately that falls on Brad. The postgame presser wasn’t impressive, either.

But clearly some off-court adjustments were made in preparing for K-State, and in-game ones, too. The offense had more chemistry, and in the second half when Frazier and Cockburn were out for their reasons, the Illini never let up and still won by almost double digits.

It’s hard to grade Brad and staff 100% fairly right now since we’ve only seen this team at full strength for two games, but I liked the adjustment on zero days rest.

From here on out, I will be doing player grades rather than offense, defense and coaching grades.