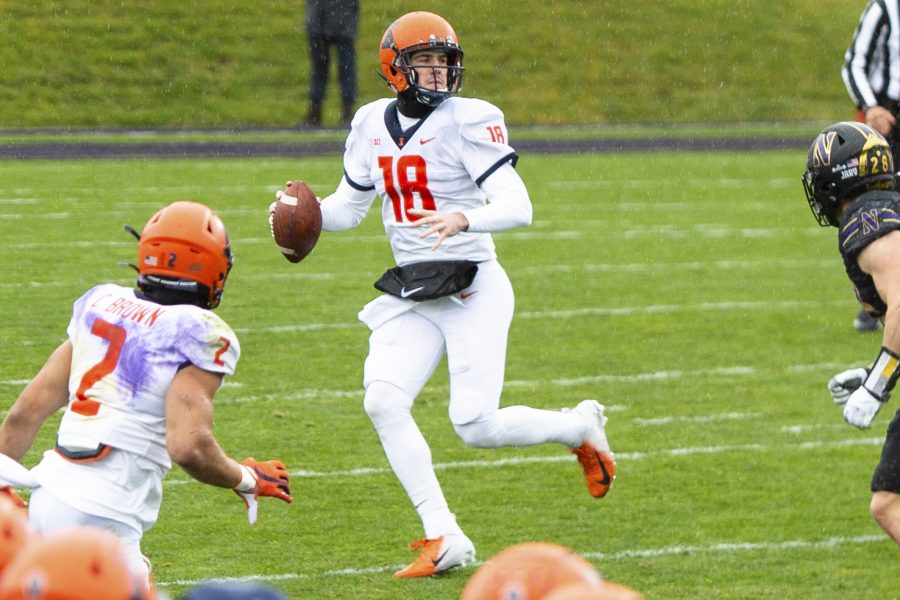 Early this season, Illinois football was backsliding. After pulling off a 30-22 victory over Nebraska in Bret Bielema’s first game at Illinois, the Illini lost at home to the UTSA Roadrunners the following week. Then, they lost to Virginia, Maryland and Purdue. In the blink of an eye, what had started as a 1-0 season record had spun off into a four-game losing streak.

The Illini eventually snapped that losing streak, pulling off an expected home win against Charlotte. It’d be a nice storyline to say Illinois overcame adversity in overcoming that losing streak, but winning a home game against a weak opponent didn’t show much at all.

As odd as it may seem, the Illini only played the Wildcats seven times between 1913 and 1928, but every meeting resulted in an Illinois win. These games also took place early on in each school’s history before the rivalry had been firmly established. Looking this far back, there aren’t any easily available box scores, so it’s hard to determine exactly what happened in these games, but we do have the final scores.

The largest takeaway from those scores is that Illinois’ margin of victory in four of its wins was 29 points or more. There is one key factor that pops up in later streaks: winning with regularity requires dominance. When one of these programs has the upper hand for an extended period, it’s almost always because the gap between the two teams is wide, leaving no room for sneaky upset victories.

The winning streak ultimately ended with a 7-0 Northwestern victory in Evanston in 1929, with its own set of trends to boot. While Illinois pulled off consistent large victories at the peak of this streak, the margins got closer in 1927 and 1928, with the Illini prevailing by one and seven points, respectively. Every game between 1927 to 1929 was within seven points, suggesting that when these types of streaks end, there’s typically the precursor of the games getting closer.

Illinois’ other seven-game winning streak between 1979-1985 followed similar trends. The Illini had a hot streak of dominance, winning five of the games by 25 or more points. However, their final win before the streak ended was by 25 points, a departure for Illinois’ final win of the previous streak coming by a mere seven points. Northwestern broke the streak again by a small amount, winning 23-18 in Champaign.

Another difference between these two streak-ending events was that in 1986 Northwestern brought on a new coach, Francis Peay. Peay didn’t ultimately have a ton of success at Northwestern, but he did find a way to beat the Illini again in 1987, suggesting that turnover within the front office may be another reason a streak ends.

Northwestern also won four games in a row between 1929-1932 and 1938-1941, but I excluded them for brevity’s sake. Between 1947 to 1950, the Wildcats followed a similar trajectory to the Illini’s 1913-1928 streak, winning their first two games by wide margins of 15 and 20 points, respectively, before the latter two games got closer. The streak was eventually snapped in yet another tight victory, with Illinois winning just 3-0 in 1951, keeping up the trend of streak-breaking wins being close.

The 2003-2006 streak bucked most of the trends we’ve seen so far. There were a couple wins by comfortable 17-point margins in 2003 and 2005, but they were nonconsecutive and the games between were close. Even the streak-breaking Illini win in 2006 didn’t fit in with previous trends. The Illini blew the Wildcats out by 21, making it the first streak-breaking win on this list that didn’t come within a one-score margin.

Ultimately, there are a few trends to be found in these historical winning streaks. For one, as the margin of victory gets tighter, it typically signals the streak is nearing its end. Secondly, there is precedent for coaching changes having an impact. Finally, most of the streak-breaking victories have come in close games.

While Northwestern has won four games in a row against Illinois numerous times, the Wildcats currently sit with their longest winning streak in the rivalry’s history at six heading into this year’s matchup. Today’s streak has included plenty of similarities to streaks of years’ past, like the Wildcats assertively winning by 18 or more points in four of the games.

While the Illini have had a hard time getting past the Wildcats lately, the blueprint for how to shatter the streak is out there. The Illini made a coaching change after last season with the introduction of Bielema, something that has ended streaks of the past.

Last year, Illinois lost to Northwestern 28-10 — not necessarily an encouraging sign — but this Illini team is a lot different than those of the Lovie Smith era. Illinois has worked to create a cogent offensive identity as a dominant running team and has a defense that’s improved throughout the year. That identity might come in handy as many streak-busting games have come in close matchups, a setting where running the ball and defense are crucial.

Northwestern might not be the same team as last year, either. It sits squarely below .500 heading into its final matchup of the season with only pride left to play for. Both potential outcomes of the game are tantalizing: Either Northwestern extends its winning streak to seven games and ends its turbulent season on a high note, or Illinois finds a way to cap off a season full of surprises with one last trick in a tone-setting win for the Bielema era against the Wildcats.