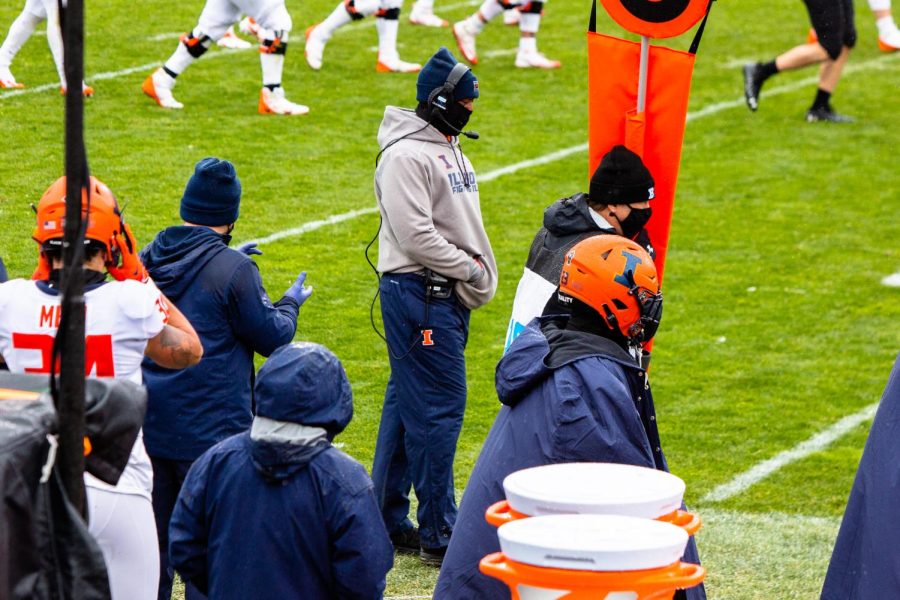 Former Illinois head coach Lovie Smith walks along the sidelines before the game against Northwestern at Ryan Field on Dec. 12. Columnist Carson Gourdie argues that Illinois needs to knock Pat Fitzgerald down a notch for in-state success.

A bowl is likely out of the picture for Illinois. Even with a victory on Saturday, which would leave the Illini at 5-7, they would need several other five-loss teams to be defeated in order for their Academic Progress Rating to help secure them a 13th game. Illinois, though, needs to keep its eye on the prize and realize that a December bowl in Detroit won’t matter in a couple years.

For this season to be considered a true success, the Illini need to knock off Northwestern, a game they should win, and reclaim their home state from Pat Fitzgerald.

Lovie Smith was 0-5 against Northwestern. Granted, the Wildcats did produce some wonderful teams in that span, including two that played Ohio State for the conference crown. There was also the 2019 Northwestern squad, which didn’t win its first conference game until beating a bowl-bound Illinois team in the season finale.

As a student of Illinois and being from the state, it personally felt like Smith was simply cashing a paycheck. While Fitzgerald has developed relationships with Illinois high school football coaches, Smith didn’t, and the Illini brand suffered because of it.

Illinois doesn’t have Ohio-rich high school talent, but the cabinets are far from empty. Just ask Missouri, Ohio State and Michigan, who all have signed wide receivers who ranked in the top 12 in the nation in that position from the 2022 class.

Bret Bielema hasn’t signed those blue-chip recruits yet, but he gets it; he understands that you need to be able to recruit your state if you want to compete at the top level. It explains why he has divided the state up into sections for recruiting, making sure every assistant coach has a presence in the state.

But isn’t it tough to convince young high schoolers that you’re the premier state program if your little private school brother beats the snot out of you every year?

Illinois is listed as just under a touchdown favorite, but the way it has played down to competition this season, it’s possible the Wildcats could stun the Illini and derail Bielema’s momentum going into 2022.

Originally, it felt like 2022 was going to be a painful march to last place in the Big Ten West as Illinois is about to say goodbye to 20-plus upperclassmen who were granted an extra year because of COVID-19. Other than the offensive line, are the departures really going to matter?

Brandon Peters, thank you for your service, but I’m ready for new leadership under center, which will be easy to obtain with the transfer portal. Chase Brown and Josh McCray aren’t going anywhere. Luke Ford and Daniel Barker are here to stay. Linebacker Jake Hansen has already been gone since the Purdue game, and Walters has shown a fantastic ability to piece this defense together with players that regularly gave up 40-plus points under Smith.

If the Illini fall to the Wildcats, I’m afraid to say it will cast a shadow on whether Bielema can manage to get his program to get up for every game. Even this season, why in the world does Illinois run through Penn State’s top-ranked defense but get stifled by Rutgers? I know UTSA is undefeated, but that’s not a game the Illini should drop. Northwestern, which is currently 3-8, has been embarrassed by Nebraska by 49 and lost to a Duke program that’s suffered another losing season.

When you play Fitzgerald, throw the records out the door because he has proven that he doesn’t overlook his in-state rival. That’s why he can claim he’s still the king of the state until Bielema can dethrone him.

A losing season is already locked up, but 5-7 and an outside shot at a bowl game sounds a lot better than a 4-8 season ending with a loss to an awful Northwestern squad that will continue to make Fitzgerald look like the man high school talent should want to play for.