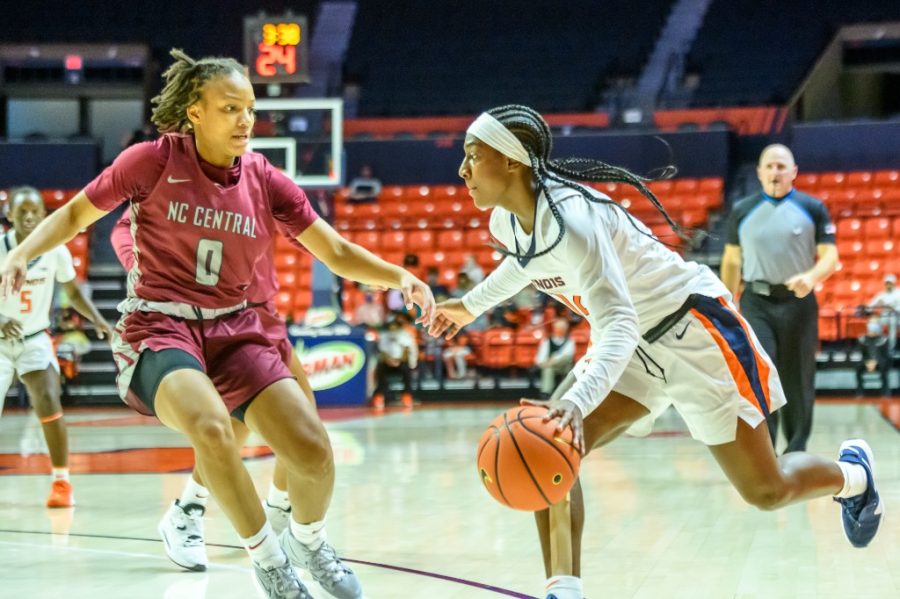 Guard Jayla Oden rushes toward the hoop during the game against North Carolina Central on Nov. 9. The Illini will be up against SIU on Thursday and have high hopes in maintaining their streak.

The Illini women’s basketball team is back at the State Farm Center on Thursday as they’ll face off against the SIU Edwardsville Cougars. Illinois enters this matchup with a 2-0 record and are coming off a 72-65 win on Sunday against Miami University.

Throughout its first two games, Illinois’ keys to success have been a variety of contributors in their wins. During their season opener against North Carolina Central, Kendall Bostic and Aaliyah Nye both stuffed the stat sheet.

But against Miami of Ohio, there were four scorers in double digits who helped lead the Illini to back-to-back victories. Illinois looks to continue its commanding lead early against SIU Edwardsville and solidify its chances of winning via its deep bench.

On the other hand, SIU Edwardsville comes into Champaign winless at 0-2 early on this year. The Cougars are on the third leg of a four-game road trip after losing their first two matches to Kansas, 98-62, and University of Memphis, 89-58.

During SIU Edwardsville’s first two games, redshirt senior guard Gabby Nikitinaite has been the team’s leading scorer at 11.5 points per game, while junior forward Ajulu Thatha has put up 10 points per game.

The matchup between these two sides will be the fifth meeting in the series. Illinois has never lost to SIU Edwardsville, and the last time these two teams met was during the 2018-19 season, when the Illini won 74-57.

The game between Illinois and SIU Edwardsville tips off on Thursday at 7 p.m. The action will be streamed live on B1G+.