Getting started on the “Wright” foot 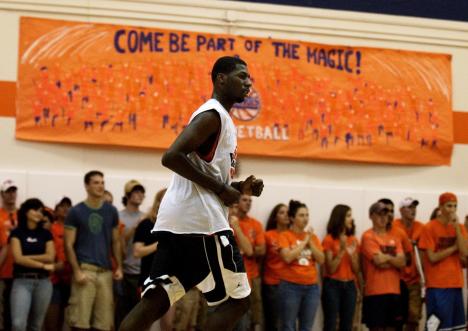 With members of Illinois athletic boosters and clubs cheering him on, prospect Julian Wright runs down the court in the Ubben Basketball Facility on Saturday. Wright, a sought-after prospect, has narrowed his list of potential schools down to DePaul, Ari Online Poster

The Illini Pride came out in force to cheer for both the Illini men’s squad and five-star recruit Julian Wright. Wright, a senior at Homewood-Flossmor High School in Illinois, has been projected as a wing-forward.

While the Illini Pride lined the court and the team warmed up for its scrimmage, the attention was aimed straight toward the door, waiting for it to finally open, bearing the 6-foot-8 nationally acclaimed recruit.

In an effort to show Wright the true Illinois basketball experience, the I-Pride created an Illini wonderland. Posters lined the gym at the Ubben practice facility stating that Wright was the missing part of the basketball dynasty.

Wright has narrowed his list to Arizona, DePaul and Illinois. With three scholarships already given out for the class of 2005, two more are available. It is expected that the team will take a point guard plus a blue-chip recruit. The Illini Pride did their best to put on a display of cheering for the latter.

“They’re always out to support Illinois basketball,” junior James Augustine said. “It’s only a scrimmage and yet they come out with as much excitement as a game.”

As the orange wave of people settled into its final position for the scrimmage, Julian Wright took the court with the team and warmed up his shot, sending the crowd into a frenzy when he capped off his performance with a 360 dunk.

Because of the pace of the scrimmage, it was a breeding ground for alley-oops and thunderous dunks. Brian Randle and Luther Head soared around the hoop while bouncy freshman Calvin Brock stamped his own highlight preview.

“It was exciting to watch one of the best kids in the country work out with the Illini,” Illini fan Brandon Coopersmith said. “When they play they put on a show for us so every once in a while we have an opportunity to give back.”