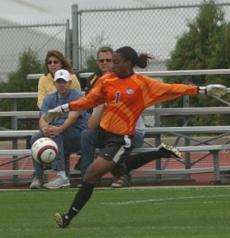 Illinois goalkeeper Leisha Alcia (1) kicks the ball after it was passed back to her by one of her teammates Sunday afternoon at the Illinois Soccer Stadium against Missouri. Illinois won. Shira Weissman

Both senior goalkeeper Leisha Alcia and senior forward Tara Hurless spent their summers playing soccer internationally with and against some of the best players in the world.

“Tara found confidence playing against some of the top players in the country, which proved to her that she belonged,” Rayfield said. “That was huge for her. Leisha grew in a different way. She was her team’s top goalkeeper, but she had to compete for that with another one of the top goalkeepers from Canada.”

The experiences Alcia and Hurless bring to practice on a daily basis have started to rub off on their teammates.

“Everyone on this team feeds off each other’s enthusiasm,” Rayfield said. “We have a lot of younger players on this team that want to have those same experiences. That keeps everyone motivated.”

Alcia started at goalkeeper for the Ottawa Fury of the W-League in Canada. The W-league is an amateur branch of the United Soccer League. The league is known for matching America’s top college players with established international talent.

During the summer, Alcia was named to the All-League team.

Alcia said the highlight of the season was finishing with a record of 13-1 as a team and making it to the Final Four.

“We got an opportunity to play the undefeated team and it was the first time all summer I had really been tested,” Alcia said. “I ended up having a great weekend. It allowed me to gain more confidence and presence on the field.”

While Alcia was in Canada, Hurless was in Brazil playing for the United States Under-21 National team. Hurless said she had to attend camp in California to try out for the team.

“I didn’t expect much,” she said. “I just gave it all I had and hoped it was enough. Then I got the call to go to Brazil and I was happy.”

The team played four games, including matches against the Chinese Under-21 National team and the Brazilian Olympic team.

The highlight of Hurless’ trip was scoring a goal against the Brazilian all-stars.

“I didn’t expect to start,” Hurless said. “Next thing I know I’m on a post run, I was able to get inside the box, then I had the ball come to me and I was able to put it in. That was a great feeling.”

The Under-21 team also got to watch and practice with the U.S. National team.

“I learned a lot from being around them,” Hurless said. “To practice with some of the top girls in the nation was really awesome. It was a great experience.”

The Illini take a lot of pride in having two of their own represented internationally.

“We realize as a team that (Hurless) and (Alcia) achieved that honor,” Rayfield said. “We celebrate and take pride in that as a program. What they achieved took place here day after day to accomplish those kinds of things.”