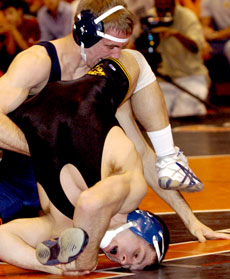 With only the final period remaining in the final match of the meet, the match was all but over. The Illini were in full command, leading 22-7 over Iowa.

The unranked Cassio Pero (141 pounds) was tied 3-3 over the No. 11 Alex Tsirtsis. As the match waned down to its final seconds, the orange- and blue- clad crowd rose to its feet in uproar like this match was going to determine the overall winner.

Although Pero was unable to get the takedown he ferociously battled for, he held off his opponent and used 2:17 of riding time to pull the upset 4-3. That sealed the match for the No.2 Illini over No. 9 Iowa, in front of an Illinois record crowd of 3,573 fans at Huff Hall, 25-7.

“It felt great to have all the fans cheering me on even though we pretty much had the meet locked up (for our win),” Pero said. “But I just wanted to go out there, wrestle tough and pick up another win for us.”

“It doesn’t matter if this guy wasn’t ranked or he was ranked – I was going to go out and wrestle the same anyway. So basically I’ve just been practicing hard and just trying to put what I do in the practice room out here. It just so happened that he was a pretty good opponent; he was ranked and I guess that makes it all the better.”

The win was only the second time in the past 43 years that Illinois beat Iowa in a dual match.

“We just need to keep getting better and work on the things individually,” said head coach Mark Johnson. “Right now, we’re going to savor the moment a little bit.”

Johnson said he was not disappointed with Ferry’s performance. Ferry started in place of Donny Reynolds, who did not compete due to an injury.

“He was really going up two weight classes and he did a great job out there,” Johnson said.

However, No. 5 Pete Friedl (174) made sure the Illini did not fall behind and won his match convincingly 12-5, adding three points to the Illini total.

In the most anticipated match up, No. 3 Brian Glynn (184) battled Iowa’s No. 5 Paul Bradley. There were few points to be had, and Glynn ended up edging out Bradley 2-1. The Illini then had a 12-4 lead.

There was no let down from No. 2 Kyle Ott (125) – he had a takedown in the first 10 seconds of the first period, got the crowd into the match once again and won on a major decision 14-6.

“We were really pumped up for this meet,” Ott said. “Everyone, even on the Internet and everything, thought it was going to be a lot closer than it was. So I hope Coach was really pleased, but everyone wrestled really hard and did well.”

“I could have beaten him by a lot more, but under the circumstances, I just tried to come out with a win today, take one for the team and get the win,” Jayne said.

Jayne said the team’s keys to success were wrestling up to its potential.

“If you just do that, you’re going to be able to beat them,” Jayne said. “The crowd was awesome. We thrive off of them. I wish it was like that all the time. It makes you go out much harder.”

Earlier in the week Tirapelle had stressed the importance of winning the “swing matches.” He said these ended up paying huge dividends for the Illini.

“Just like I said, there were a lot of swing matches, (and) basically we won them all,” Tirapelle said.

Johnson was all smiles over the match and said the fast start was crucial towards setting the tone.

“I think the fast start was good,” Johnson said. “I think it just carried through all night.”

“From start to finish, with Anton Dietzen and Cassio Pero winning and hanging on at the end here to win, it was just a great win. You can’t pick out one highlight in a combination like that.”

Tirapelle played up the importance of the crowd in the match.

“The crowd had a large part to do with it,” Tirapelle said. “It’s just awesome to be able to wrestle in front of that many people. It just makes it very difficult for the opponents to do their best.

“It was awesome. I wish everybody would come back at every match. I wish they could all be that exciting and that intense, but it was just great to have that many people here supporting us. I really think that influenced the match.”

The Illini compete Friday and Sunday at Purdue and at Michigan, respectively. Jayne said the victory over Iowa gives his team more confidence going into those matches.

“We know we’re No. 1 in the Big Ten,” Jayne said. “And we wrestled like it today, and we’re going to continue to do that.”